Another masterclass from Boris Johnson on the art of talking, and at times wearing, literal sh*t. 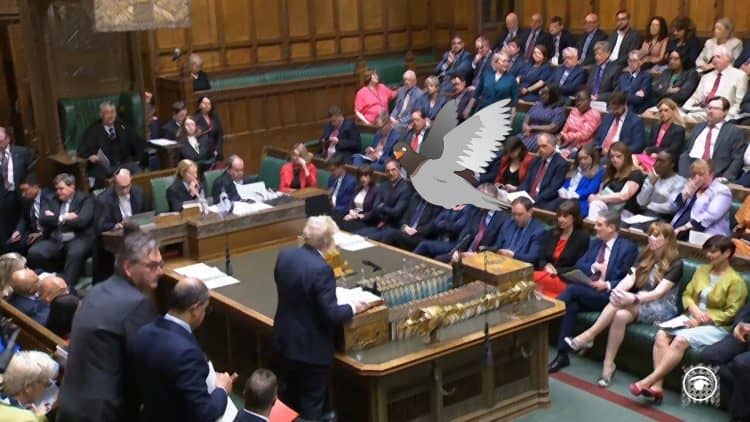 Speculation over a curious mark on the prime minister’s suit bounded about the social media airwaves as Prime Minister’s Questions got underway this afternoon.

The PM, who has become well acquainted with being in the shit, appeared to step it up a notch in today’s session, which was characterised by more verbal diarrhoea from ‘Big Dog’.

At one point he was asked on a scale of one to 10 how he is doing at keeping to the principles of the ministerial code.

He replied a solid ten out of ten. So yeah, there was no shortage of faecal matter one way or another.

The art of talking sh*t

But was it really excrement on his clothing? I hear you ask.

Well, it seems in the chamber you can claim anything is real regardless of what is happening in the real world.

You see the PM said we have a strong economy and a record number of jobs.

This is hard to stomach as even the governor of the Bank of England warned of ‘apocalyptic’ food prices for the UK and admitted he could do nothing to stop inflation.

Of course, neither the PM nor the governor admitted that it was anything to do with Brexit.

The PM also said that Covid, global energy costs and the war in Ukraine are damaging us.

So which one is it? Are we doing well or not? It can’t be both.

This is the same PM who blames Gordon Brown for the struggling UK economy when he left office and never mentions the global economic meltdown that Brown was battling.

The UK that the Tories convince themselves is the reality in the chamber is simply not the one normal people see. You could see it etched across their faces on the front benches, but they try and hide it behind the drooping eyelids of the free market.

‘How am I going to be an optimist about this?’ they might hum as the financial earthquake engulfs all of us.

Asked whether he supports a windfall tax, Johnson responded by accusing Keir Starmer of not being able to define what a woman is.  Nothing like a bit of transphobia to distract from the issues of the day.

So what are they going to do to help the people in the real world? Well, nothing, as they voted down the windfall tax legislation last night.

The PM told the House that they don’t want to tax business, even just a ONE off, so instead we all have to pay through higher taxes on an ongoing basis.

Also, it’s worth noting that the PM has himself announced a rise in corporation tax from 19 per cent to 25 per cent next year.

Regardless Johnson ploughed on. ‘’Labour’s plans are always and everywhere to raise taxes”, he said as Britain’s tax burden stands at its highest for 70 years.

But Starmer predicted a U-turn of operatic proportions on the horizon. It is against all their principles, they just don’t want to fold…yet.

Now they have voted against tax, the reverse ferret is going to be their biggest one yet, and there have been more than a few.

It’s the Marcus Rashford story all over again, eventually, they will do it, once they have stopped listening to their nutty backbenchers (and cabinet members to be fair), and lose any kudos they could have garnered had they acted sooner.

Keir even listed all the people who were in favour of a windfall tax and then pointed to Rees-Mogg as one of the few examples of people against it.

Stamer then called Mogg an “overgrown prefect sticking notes on people’s desks,” which was amusing, to be fair.

It might not sit well with the Tories but even the egg-covered Margaret Thatcher slapped a windfall tax on the oil companies in 1980. Then in 1981 levied one on the banks!

At least if you win the lottery you’ve had to go through the process of acquiring a ticket.

So after wading through the sewer of today’s PMQs, regardless if it was a bit of avian discharge that hit the PM, then this football chant might resonate with you.

If I had the wings of a sparrow,

If I had the ass of a crow,

And sh*t on the b*stards below below.

I’d sh*t on the b*stards below…