"There is only one problem with throwing eggs at Margaret Thatcher's new statue in Grantham. Eventually, you run out of eggs." 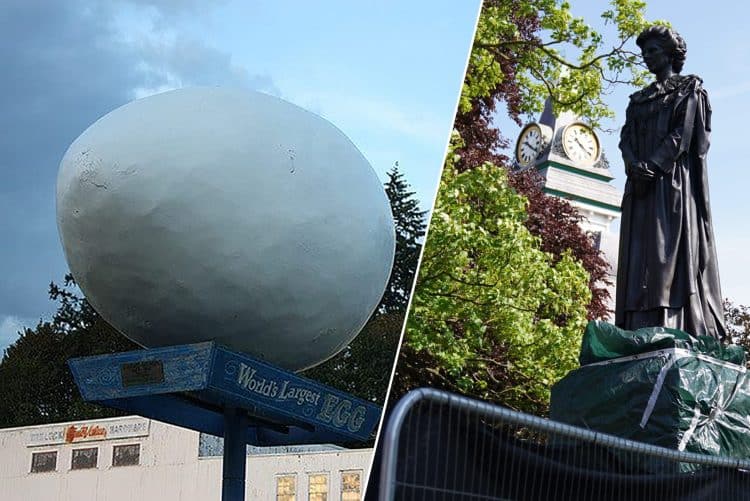 A crowdfunder has been started to bring the World’s biggest egg to Grantham in honour of Margaret Thatcher.

The Iron Lady’s sculpture was lowered into place in her home town of Grantham this weekend.

It was initially intended for Parliament Square in Westminster, but concerns over vandalism meant it was moved 125 miles up the A1.

Regardless, the statue was pelted with eggs just hours after the big reveal, with one person even spotted selling eggs standing next to the plinth.

But, as a new crowdfunder points out, the problem with pelting the statue with eggs is that “eventually, you run out of eggs”.

Seeking to raise money to bring the World’s biggest egg to the UK to sit beside Thatcher, the page notes:

Ever since the £300,000 shrine to our former prime minister was installed it has been targetted by egg pelters who come and go carrying half dozen packs at a time or maybe more. Heck, one bloke even tried to channel Thatcher’s entrepreneurial spirit by selling eggs next to the statue at £10 a pop. It’s what she would have wanted.

But eventually they all run out of missiles and the statue, much to the chagrin of local residents, gets to live another day resplendent in its ‘new statue’ sheen. Which got me thinking, if only there was a more permanent solution to the problem, and there is.

Out in Winlock in Lewis County, Washington, there lies a shrine to the town’s booming egg industry that, and I think they would agree, would be better suited sat next to the Iron Lady in the UK. That way, we wouldn’t have to keep waisting good eggs and we would have a permanent reminder that, supply issues aside, we’d all be there lobbing eggs day and night.

I don’t know how much money the good people of Winlock will want for their prized statue, but here’s the beauty of the idea. If we can’t convince them to sell us their massive egg we can donate all proceeds to Thatcher’s other memorial; food banks. It’s a win-win!