Droopy drawers number 44 was desperately trying to persuade the nation to vote for the Tories in the Council elections next week. It’s not looking good for the Conservative party. 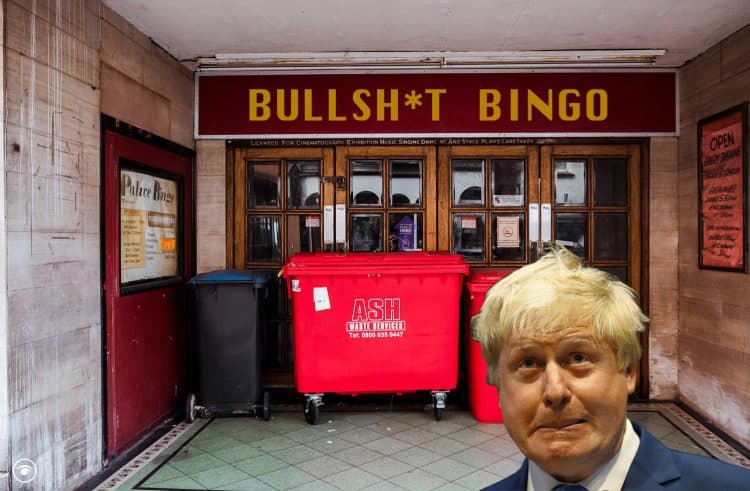 There were no surprises in the Chamber today as Boris’s bullsh*t bingo went into overdrive.

Droopy drawers number 44 was desperately trying to persuade the nation to vote for the Tories in the council elections next week. It’s not looking good for the Conservative party, Number 43 down on your knees.

However, one number that wasn’t called today was legs eleven, so Anglea Rayner was spared wolf whistles.

It also seems that the man at Number eleven has legged it, as Rishi Sunak didn’t appear to be in the Chamber today. Number 81 drop and run.

Shockingly Caroline Lucas pointed out that 56 members and three cabinet members are being investigated for sexual misconduct. Over 55 snakes alive.

It just kept getting worse. The PM refused to say that he was embarrassed that Priti Patel’s Home Office put Imran Khan, the convicted paedophile MP for Wakefield, on a board for sexual exploitation.

He was left on that board during the police investigation and after the victim informed them. Number 4 police knock at the door.

Away from the seemingly nonstop examples of gross sexual misconduct in the House of Parliament, Sir Keir Starmer demanded to know why the UK will have the slowest growth and highest inflation in G7 this year.

The PM pointed out that it was the highest last year, but that is of no use to the UK going forward. Number 25 duck and dive.

Next, he was left with the embarrassing claims that the party was cutting taxes, when he is leading a government that has overseen the most tax increases since the 1940s. Number 50 over half a century.

The PM was then asked by Lib Dem MP Daisy Cooper about the report that just broke this morning that the government policies to discharge patients from hospitals to care homes at the start of the pandemic were ‘unlawful‘.

Boris Johnson half-heartedly replied: “I want to renew my apologies and sympathies for all those who lost loved ones during the pandemic.” Number 27 stairway to heaven.

While elderly people were illegally left to die and spread Covid to other at-risk pensioners it seems he let Number 10 become some kind of frat house, number 38 (ambushed) cake.

His supporters claimed that he got all the big calls right. But that simply isn’t true. Number 52 the PM doesn’t have a Danny La Rue.

The cost of living crisis is leaving people not being able to heat or eat. The PM isn’t on the side of the people, he has refused a windfall tax on the energy companies making profits, that even they seem embarrassed about. So there will be no number 62 turn the screw with a windfall tax.

So as he picks out the last number Johnson calls out number 88, two fat ladies and they will be singing his name.

The call of the house will be heard in the Chamber and finally Number 10 won’t be his domain anymore.