It's Donald Trump’s last day in the Oval Office. Let’s take a look back at his chaotic, catastrophic final days. 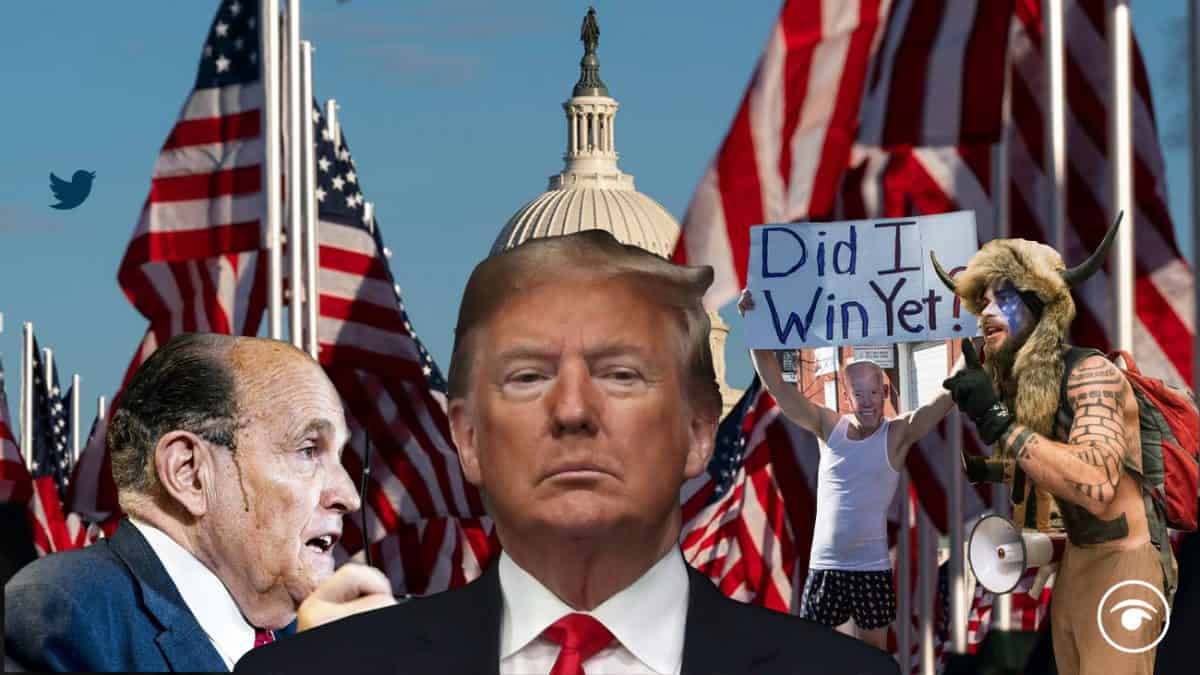 It is rare, these days, that Brits can sit back with a sense of smug satisfaction about the way their country works.

But we can at least take solace from the fact that we do not have to endure the sort of chaotic interregnum – sorry, ‘transition’ – that has engulfed the United States in the 77 days since Americans voted Donald Trump out of office.

Instead, when British voters opt for a change of leader, removal vans are readied and dispatched to Downing Street before David Dimbleby has had the chance to grab some shuteye. Our new prime minister is whisked away for tea and biscuits with Her Majesty with startling efficiency.

Our cousins across the Atlantic are not so lucky. The eleven weeks since Joe Biden’s victory have witnessed insurrection, impeachment and ignominy. Trump has abandoned any pretence that he is governing the country. Tens of thousands of Americans have been killed by coronavirus.

These last weeks have been Trumpism unchained, the chaos of a four-year presidency unlike any other distilled into three months of madness. On this, Donald Trump’s last day in the Oval Office, let’s take a look back at the final, inglorious chapter of a book that tens of millions of Americans will be glad to finally see closed.

America votes, the world watches – and keeps on watching as hours and days tick by before a winner is declared. A huge surge in early and absentee voting sparked by the pandemic means it takes a long time to count all the votes, and no winner is declared on the night.

Despite the lack of a clear winner, Trump takes to the stage and declares victory at 2am. Hours later, Biden overtakes Trump’s on-the-night lead in key battleground states Michigan and Wisconsin, swinging the result decisively in his favour.

With the likelihood of a Biden victory seemingly increasing with every vote counted, Trump holds a press conference, claiming: “If you count the legal votes I easily win. If you count the illegal votes, they can try to steal the election from us.”

For months, Trump had been baselessly warning that mail-in ballots – heavily favoured by Democrat voters – were fraudulent. His remarks set the stage for ‘Stop The Steal’ protests across the country, with incredulous MAGA voters led to believe that Democrats had robbed Trump of the presidency.

We have a winner. Biden takes Pennsylvania, and becomes president-elect. Despite the pandemic, crowds flood the streets of cities across the US to celebrate the end of Trump.

His secretary of state, Mike Pompeo, vows a day or two later that “there will be a smooth transition – to a second Trump administration”.

Trump fires a spate of top officials at the Pentagon, replacing them with loyalists and ideologues after his election defeat. His refusal to concede the race means that Biden is denied access to vital intelligence briefings from American spy agencies.

The president goes on to fire the Director of the Cybersecurity and Infrastructure Security Agency a couple of days later, after he denied that the election was in any way fraudulent.

Trump pardons disgraced ex-National Security Adviser Michael Flynn, who was convicted for lying to the FBI during the Russia investigation in 2017.

The deeply-conspiratorial Flynn will become central to Trump’s efforts to overturn the results of the election, at one stage urging the president to invoke martial law to force states to recount votes.

Days later, he had lashed out at a reporter who pushed back on his baseless claims of election fraud in a heated Thanksgiving press conference, calling the journalist a “lightweight” and telling him: “I’m the president of the United States”.

Trump uploads a video – 46-minutes long – ranting that the election was stolen from him. Claiming it was “maybe the most important speech I’ve ever made”, the president asserted he won the election “without question” – adding that “Joe Biden can’t be president”.

Biden’s victory is certified by the Electoral College, by a margin of 306 votes to 232 – the same margin Trump beat Hillary Clinton by in 2016.

Senate majority leader Mitch McConnell congratulates Biden and Vice President-elect Kamala Harris, adding that “all Americans can take pride that our nation has a female vice president-elect for the very first time”.

News breaks that pushed to have a “kraken” conspiracy theorist named as a special counsel to investigate baseless claims of electoral fraud,.

Citing two anonymous sources, the New York Times said presidential advisers – including Giuliani – had pushed back against the plan to install lawyer Sidney Powell in an Oval Office meeting on Friday.

Powell was cut from Trump’s legal team in November after making a series of bizarre claims, including that voting software used in key states was created at the direction of Venezuelan president Hugo Chávez – who died seven years ago.

She also pledged to “release the kraken” – a reference to a mythical sea monster. No kraken was released.

Republican Senator Josh Hawley of Missouri announces his plans to object to the certification of Biden’s victory in Congress on 6 January.

A phone call between Trump and Georgia Secretary of State Brad Raffensberger is leaked, in which the president tells him the election was fraudulent and demands that he “find 11,780 votes, which is one more than we have”.

Raffensberger refuses. Trump appears to threaten Raffensperger and Ryan Germany, the secretary of state’s legal counsel, by suggesting both could be criminally liable if they failed to find that thousands of ballots in Fulton County had been illegally destroyed. There is no evidence to support his claim.

Two run-off elections in Georgia hand Democrats control of the Senate, a major boost for Biden. Reverend Raphael Warnock, who preaches at the same Atlanta church as Martin Luther King Jr did, is elected the state’s first Black senator.

A day later, Jon Ossoff – a 33-year-old Jewish documentary film producer – is declared the winner of his race. The Senate is now tied 50-50, with vice president-elect Harris tilting it in their favour with a tie-breaking vote.

A day that will live long in infamy. Trump holds a rally outside the White House, urging his supporters to march on Congress to pressure lawmakers – and Vice President Mike Pence – to reject the certification of states’ electoral votes.

Trump supporters march on the US Capitol after Pence refuses to do Trump’s bidding. The pro-Trump mob becomes increasingly violent and storms the building. Shots are fired as rioters break through windows and flood into the building.

Congressmen are forced to take shelter in locked offices and wear gas masks as insurrectionists overrun the building, some of them chanting “Hang Mike Pence”. Trump is initially quiet, but later urges his supporters to “go home” – before adding “we love you, you’re very special”.

Five people are killed, including a US Capitol police officer – Brian Sicknick – and a pro-Trump rioter, who was shot by officers.

In the early hours of the morning, Pence officially declares Biden the victor, after lawmakers vowed to finish what they had started before the attempted insurrection.

Democrats – and some Republicans – urge Pence to invoke the 25th Amendment, which would declare Trump unfit for office and remove him immediately. She vows impeachment proceedings if that does not happen.

The president announces he will not attend Biden’s inauguration on 20 January. He will be the first outgoing president not to attend his successor’s inauguration since Nixon – who resigned in disgrace – did not attend Gerald Ford’s swearing-in in 1974.

Biden says the decision is “one of the few things he and I have ever agreed on”. Pence later says he will attend.

Trump becomes the first president in US history to be impeached twice, after 222 Democrats and 10 Republicans vote to change him with “incitement of insurrection”. He now faces a trial in the Senate – which will not take place until he has left office.

On his last day in office, Trump is reportedly fuming at the Biden’s star-studded inauguration line-up – which will feature the likes of Lady Gaga, Tom Hanks and Jennifer Lopez.

Removal vans have been spotted at Mar-a-Lago, the Florida base which is expected to become the real estate mogul’s new permanent post-presidency home. Rumours swirl about a raft of last-minute pardons.

In an “historic snub”, it emerges that Melania Trump will not give her successor – Dr Jill Biden – a tour of the White House before she departs, after giving a speech urging Americans to “use every opportunity to show consideration for another person and build good habits into your daily lives”.

Preparations for Biden to become the 46th President of the United States gather pace.