"The President is inciting domestic terrorism. I'm safe, but this is a sad day for America." 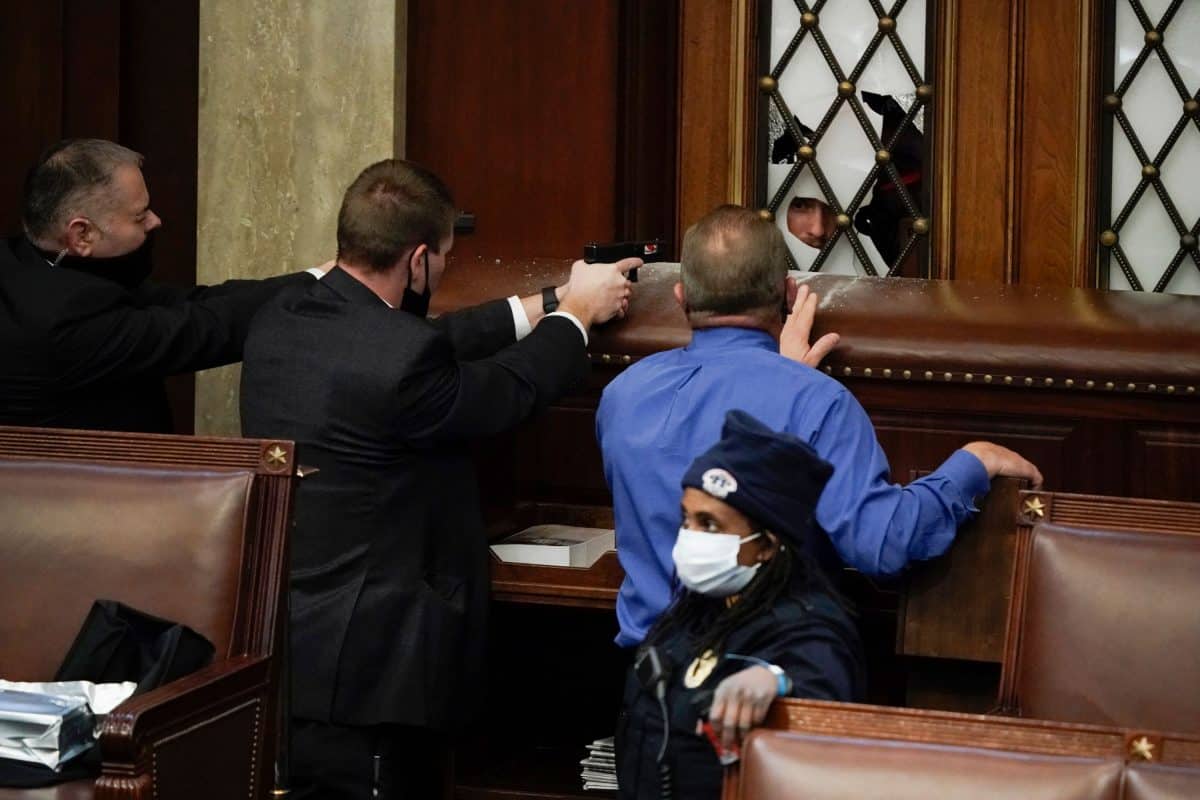 The US Capitol is in lockdown after protesters breached barricades amid violent clashes between President Donald Trump’s supporters and Washington DC police.

A former DC police chief has said “this is as close to a coup attempt as this country has ever seen”.

The White House said National Guard troops are on their way to the Capitol after the building was breached by a mob of Trump supporters.

Trump has not yet called on the mob to disperse; he has only asked them to “remain peaceful”.

Speaker Nancy Pelosi Tweeted: “SenSchumer and I are calling on President Trump to demand that all protestors leave the U.S. Capitol and Capitol grounds immediately.”

There are also reports of militia members gathered around the Georgia Capitol in Atlanta.

One person has been shot inside the US Capitol after President Donald Trump’s supporters stormed the building and violently clashed with police in a bid to stop Joe Biden’s victory being certified.

The protesters breached the Senate chamber on Wednesday afternoon as senators were rushed from the room by Capitol Police.

They were heard banging on the doors of the House chamber and yelling outside as police officers rushed lawmakers out of the chamber and to safety.

Tear gas was being used by Capitol Police as protesters filled both the House and Senate side of the Capitol.

The images are being played out live on national television and on social media, we have gathered as much in time reactions as we can.

Both chambers of Congress abruptly recessed as they were debating the Electoral College vote that gave Joe Biden the presidency.

There was confusion in the House chamber as the Capitol doors were locked and debate was suspended.

‘We’ve been given gas masks on the House floor. Tear gas has been used in the Rotunda,’ wrote Democratic Rep. Gerry Connolly on twitter.

A representative from the Capitol police spoke from a lectern on the dais and told politicians to remain calm, and that more information would be available soon.

An announcement was played inside the Capitol as lawmakers were meeting and expected to vote to affirm Joe Biden’s victory.

Due to an “external security threat,” no one could enter or exit the Capitol complex, the recording said.

The skirmishes occurred outside in the very spot where president-elect Biden will be inaugurated in just two weeks.

Protesters tore down metal barricades at the bottom of the Capitol’s steps and were met by officers in riot gear.

A suspicious package was also reported in the area, Capitol Police said.

The skirmishes came just shortly after President Trump addressed thousands of his supporters, riling up the crowd with his baseless claims of election fraud at a rally near the White House on Wednesday ahead of Congress’ vote.

“We will not let them silence your voices,” Mr Trump told the protesters, who had lined up before sunrise to get a prime position to hear the president.

Members of Congress inside the House chamber were told by police to put on gas masks after tear gas was dispersed in the Capitol Rotunda amid the skirmishes.

Law enforcement instructed politicians to retrieve masks from under their seats amid the clashes.

After seemingly egging on the protests, President Trump tweeted to his supporters to “stay peaceful” as they violently clash with law enforcement and breached the Capitol building.

Labour leader Sir Keir Starmer has branded the scenes in Washington DC as “horrendous” and a “direct attack on democracy”.

Sir Keir tweeted: “Horrendous scenes from the US.

“These are not ‘protestors’ – this a direct attack on democracy and legislators carrying out the will of the American people.”

“I think the American democratic institutions are strong, and hopefully everything will return to normal shortly.”