Following the closure of the original MEATliquor, another central London site has opened just around the corner. 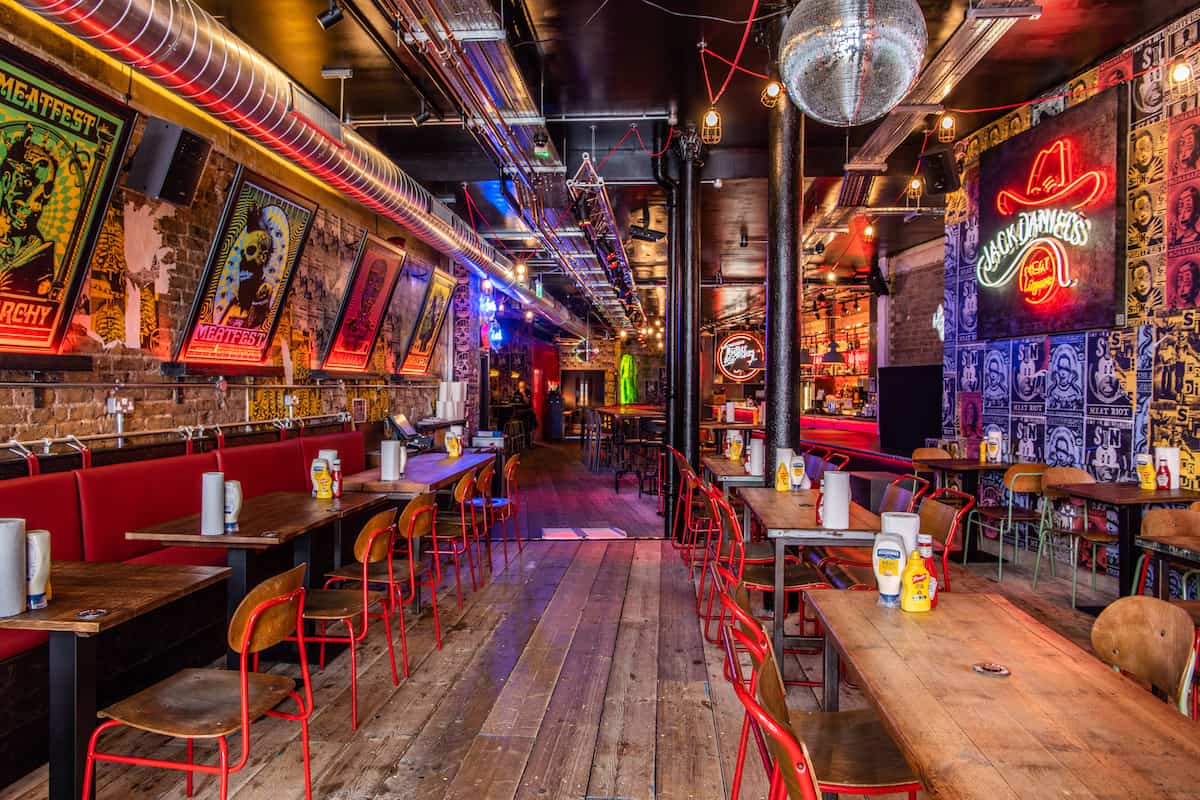 Following a weekend serving burgers at Burning Man, in the Nevada desert, Yianni Papoutsis spent £3,000 on a burger van and began to serve burgers from a Peckham car park. Times and dates were announced via Twitter and the MEATwagon was quick to become a success, demanding long queues and garnering much hype amongst food bloggers. In 2010, however, the van was vandalised and destroyed, leading landlord and MEATwagon fan, Scott Collins, to invest in launching another. This van operated from the car park of Collins’ pub, at the time, before being stolen later that year. Hoping to raise money for another, Papoutsis launched #MEATeasy, an indoor pop-up at a New Cross pub, before eventually earning enough capital and traction to open a bricks and mortar restaurant.

Beneath an NCP car park behind Oxford Street’s Debenhams, the original MEATliquor restaurant opened at the end of 2011 and quickly became widely genuflected as a pivotal cog in London’s revolution surrounding burgers at the time, still yet to become the city’s most popular export from America by way of Germany. In February 2019, however, the original restaurant was closed following plans for the building to be demolished in order to make way for a luxury hotel. A new central London site (MEATliquor W1 MK II) quickly followed, however, located just around the corner from the former.

The brand’s 11th restaurant, the latest central London site is MEATliquor’s biggest yet, open until 3am every morning. Inside, the space continues to champion the interior design accents associated with the group’s other venues, while loud music matches the model of casual, friendly service. Here, MEATliquor’s recognisable graffiti is sprawled across the walls, neon signs are provided by Gods Own Junkyard in Walthamstow, and each table is dressed with a ‘Poke for Jäger’ button – a down-to-earth nod to the ‘Press for Champagne’ buttons at Bob Bob Ricard and Bob Bob Cité. Elsewhere, a repurposed portaloo acts as a photo booth; and an eight-foot illuminated pickle looms conspicuously.

Gimmicks aside, the quality of MEATliquor’s food offering has remained consistent with the constant redevelopment of the menu, unlike so many other fast-growing burger groups. Classics such as the Dead Hippie and Monkey Fingers remain available, joined by a selection of new cocktails served in ½, one, two or three litre serves.

A recent dinner began with a tart strawberry beer from Tiny Rebel, before all of the food arrived at once on a metal tray. This adds even further to the restaurant’s model of modish fast food, taking pedestrian comfort food classics and elevating them often outrageously. Fried pickles (£3.75), for instance, we’re generously seasoned and cloaked with thick batter, like savoury doughnuts – the sweet, sharp pickling liquor slicing through the residual oil and the pungency of the accompanying blue cheese sauce, all demanding to be washed down with a slug of bourbon.

Another MEATliquor highlight is the Dead Hippie burger (£9.50) – a long-term staple, named after Papoutsis’ visits to Burning Man. Two thin patties were deftly grilled, aggressively seasoned, rampant with mustard and served in a firm bun with cheese and more pickles. A burger that would be as close to perfection as possible were the beef able to be cooked slightly rarer. (Westminster Council are to blame here).

The chilli dog (£9.50), on the other hand, featured a smoked beef sausage from Big Apple Hot Dogs; the slight sweetness and snap of the casing gloriously contrasting the soft, piquant chilli con carne topping, embellished with jalapeños, cheese, onions and French’s mustard. A masterclass in balance of flavours. On the side, cheese fries (£6) weren’t so revolutionary but were enlivened by the additional extra of thick chicken gravy (£1), while hash browns (£3.50) were crisp and golden, harbouring scraps of fluffy potato. Just two desserts, proper, are available: Jägermeister ripple ice cream and ‘Filth Pie’. A repertoire of alcoholic milkshakes was most appealing, however – particularly the potent concoction of bourbon, pecan brittle and salted caramel milkshake.