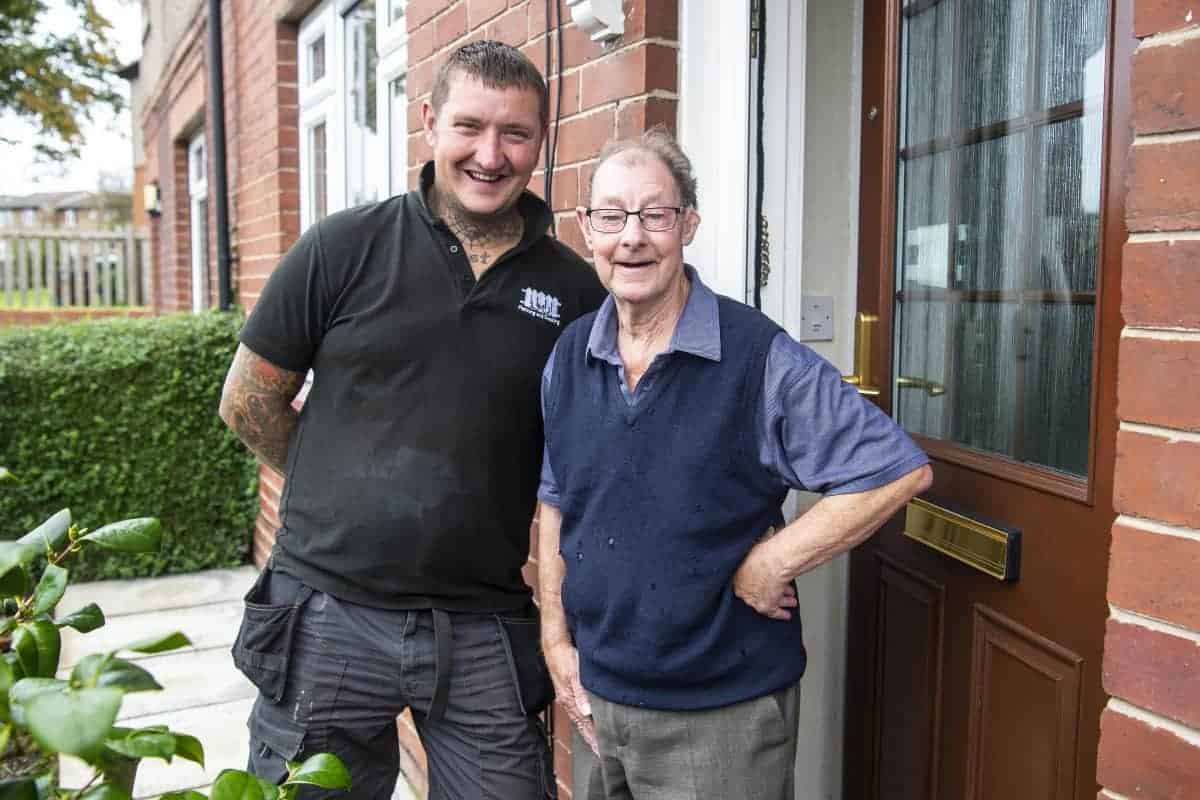 A kind-hearted workman built a step for a frail pensioner who had not used his front door for more than five years – in exchange for a cup of tea and a chat.

Lee Jackson was approached by OAP Robert North for a quote to build a step as he was having trouble getting in and out of his house because of the big drop from his front door.

When Robert, 80, asked how much the step would cost outside his semi-detached house, generous grafter Lee quoted him precisely one cup of tea and a chat.

Self-employed Lee, who runs LMJ Fencing and Decking, said: “I was working next door and he just came round to talk to me.

“He said he’d had a bit of fall the other week and asked for a price for a step outside his front door.

“He had some bricks in his shed and I had some sand and cement in my van, so I said I would do the job for him for the price of a cup of tea and a natter.”

Lee, from Dewsbury, West Yorks., knocked up the 600mm x 300mm step in just over an hour using bricks, sand, cement and a paving slab.

After completing his good deed for the day on Wednesday, September 25, Lee then sat with Robert for a chinwag.

Lee added: “He hasn’t got a lot of family and I thought he could do with a chat. I thought if it was my granddad, I’d want somebody to do it for him.

“He was filling me in on what was happening in the rugby union world cup and telling me news I hadn’t seen because I work through the day.

“He was great to talk to. “He offered to go and buy the materials, but at 80, I thought he needs every penny he can get.

“I remember my grandparents at that age and they weren’t well off, so there was no way I was going to let him pay for it.”

It is not the first time Lee has offered his services for free when a person needed his help.

He added: “If I can do something to help someone, I’ll do it. There’s so much negativity these days, we need some positivity and we should help each other out where we can.

“A simple act of kindness can go a long way and really make a difference to people’s lives.”

Robert said he was “happy” with the step and “grateful” of Lee’s generous gesture to do the work for free.

He said: “I’ve been struggling to get in and out of the house for the last five years. The council put a handrail in, but it’s a big drop to step down out of the door.

“I have had to use my back door and walk round.

“I struggled to get out of the house before, but it’s a lot better now I have the step.

“I’m more mobile and I can get out of the house – and Lee has done a damn good job!”