Eventually, the Tories stood up and clapped, and Nadine Dorries ran after him, less Casablanca more Fatal Attraction. 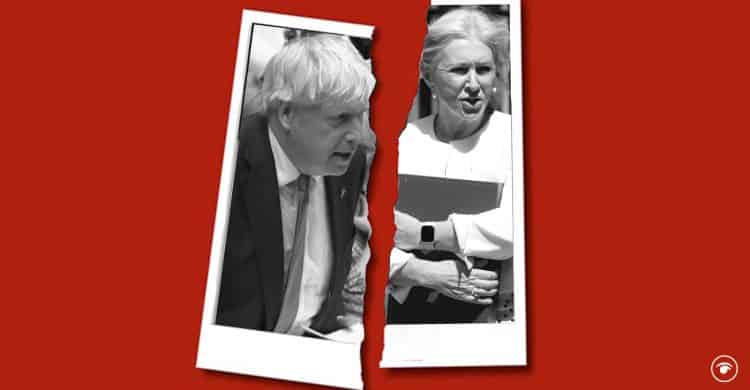 It was Boris Johnson’s last PMQs and it started and ended, as ever, with a lot of nonsense and hot air, no pun intended.

The failed PM thanked the brave firefighters who battled blazes across the country.

However, Johnson didn’t bother going to the Cobra meeting about the incoming heatwave, instead, he went to a party at Chequers on our dollar and flew about in a fighter jet.

Also back when he was Mayor of London he said ‘get stuffed’ to someone who asked him about cuts to fire services.

So was it going to be a respectful and thoughtful final PMQs for Johnson and the summer recess?

Of course not, as the first question led to Tory MPs jeering Kim Leadbeater (sister of murdered MP Jo Cox) when she asked the PM to reflect on public standards during his time in office.

Then it was time for Sir Keir Starmer to battle with the outgoing PM one last time.

He had a strong performance, mainly as he didn’t use his own words, which is wise, and quoted attack lines from the Tory televised leadership squabble.

Starmer repeated Liz Truss who said Sunak’s plans would cause a recession, then Penny Mordaunt who said public services were in a desperate state. Who has been running the government for 12 years?

He then asked whether the PM agreed with Liz Truss that, if Rishi Sunak has a plan for growth, we “should have seen it already”.

He was shooting fish in the pork barrel of politics.

The Labour leader didn’t even need to mention Micheal Gove who said that basic functions of the Government are “simply not functioning and “we are no longer providing an efficient delivery of services.”

The central Tory party cancelled the third debate as airing your filthy laundry after 12 years of grime, is not a good look. That prolonged skidmark has melted in the heatwave and won’t come off.

As Johnson finished jousting with Starmer, the Tory benches shouted “more, more”. These were the people who, apart from Dorries and a handful of nutty backbenchers, stabbed him in the front with over 50 cabinet resignations!

One assumes not many Tory MPs wanted to pass on their thanks to Johnson which gave a  lot of SNP members a chance to demand another referendum.

It was left to Sir Edward Leigh to list his achievements, which was booed by the opposition, and probably internally by many of his own side.

Johnson stood up and said: “Mission largely accomplished … for now”.

Eventually, the Tories stood up and clapped, and Nadine Dorries ran after him, less Casablanca more Fatal Attraction.

His final words were “Hasta la vista, baby,” famously from The Terminator films.

But the Arnold Schwarzenegger quote that came to my mind was “Here’s your Sub-Zero… now plain zero,” from the Running Man.

Or perhaps ‘Who is your daddy, and what does he do?’ from Kindergarten Cop.