The right, left and centre of the party has abandoned him. It isn’t a race to the bottom. The rectum has prolapsed and a few slimy dingleberries cling on. 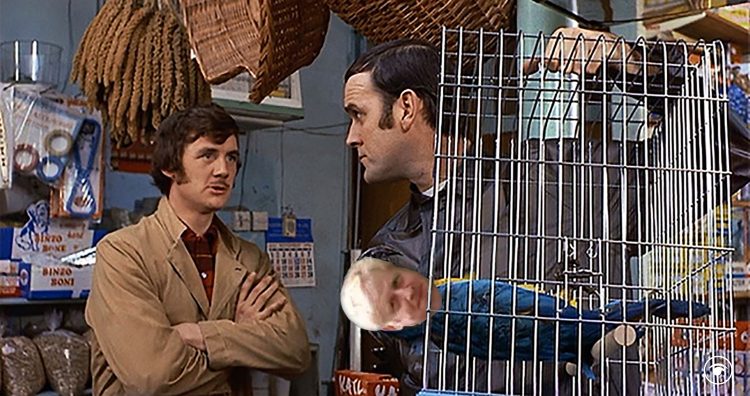 It was box office today, but PMQs became Loathe Island for the PM.

Starmer called it ‘a pathetic spectacle” and it would be hard for anyone to disagree with him.

At 11.36am Home officer minister Victoria Atkins resigned. I was losing count but I think it is 16 ministers on the payroll who have jumped ship and counting.

It was 18 by the time I finished writing this!

Even ‘30p Lee’ Anderson turned against the PM!

Theresa May must be bounding through fields of wheat, sadly not of the Ukrainian variety.

Could you walk into a room of hundreds of people, where the only people left on your side are Dotty Dorries, the haunted pencil and a bloke who spent taxpayers’ money to heat his horses, oh and the most boring psychopath ever born in Dominic Raab?

To be fair only Boris Johnson has the complete lack of self-awareness to attempt it. The outcome was beyond shambolic. Members of his own side demanded he resign, Corbyn was rolled out three times, and Ukraine was shamelessly used as his human shield on numerous occasions.

Imagine wanting to be PM with every fabric of your DNA, only to turn up and be a total fucking failure. It is rare that I swear in my posts, but there is no other word for it.

The right, left and centre of the party has abandoned him. It isn’t a race to the bottom, the rectum has prolapsed and a few slimy dingleberries (look it up) cling on.

A week ago he said he was going to stay until 2030, as the sun rose today he needed to cling on until summer recess, but by mid-morning he just needed to linger on until high noon.

There was no fridge to hide in, if there was it would be full with £10 Lurpak.

The only person left saying the PM got all the big calls right is Nadine Dorries. Even Johnson has admitted he hasn’t.

Surely appointing a man who you knew to be a sex pest into a whip role is a big call.

So he thought this was right when he made the appointment, even though he allegedly called him ‘Pincher by name pincher by nature,’ and that is the most worrying thing.

Charge of the lightweight brigade

Starmer said that the people left to support him should be called the charge of the lightweight bridge and Z list cast of nodding dogs. The ones that had gone were “the first recorded case of the sinking ships fleeing the rat.”

The boring psycho nodded back, the rest on the front bench laughed. You couldn’t make it up.

Ian Blackford then chipped in and said the PM wasn’t the Black Knight from Monty Python but actually the Dead Parrot.

One Labour MP cheekily asked the PM that if he hates walkouts so much, what legislation will he use to stop further government officials from leaving their posts.

It was Javid and Sunak who began the mass exodus yesterday, but these aren’t heroic figures.

These were people in some of the highest offices of state, they worked with the PM daily.

These were the type of people who voted for him in his no-confidence only a matter of weeks ago.

If you believe that those in central government didn’t know about the Pincher allegations then pinch, no punch, yourself in the face.

He was the wrong person for the wrong time and the party and more importantly his cabinet, propped him up, to make sure they still had a seat at the table.

The UK is crumbling, due to Brexit, cost of living, inflation, covid the list goes on. How much energy has been wasted to save Big Dog?

So what can the PM and the horse box chancellor do? A ‘sugar rush’; of uncosted tax cuts, which will lead to financial armageddon.

And I’m sorry but don’t give me the Zelensky thing, he must be sick of the constant of the calls and visits. The Ukrainian president must know he is being used. Another useless Tory PM can send him weapons.

Senior Tory backbencher, Tim Loughton asked what it would take to actually resign.

He said if someone got in the way of the UK helping Ukraine, a sickening use of the human catastrophe in that nation to keep his job.

Then another Tory MP Gary Sambrook simply told the house he should resign, people clapped, not just on opposition benches.

Johnson responded with “the reason they want me out” as if it wasn’t just his own MP who asked him to quit.

The speaker told them off for clapping, and that is where we are.

We are a basket case nation, who have cut ourselves off from the world and we have let the equivalent of the guitar man from Mad Max drive us into oblivion.

The wheels have come off, the chassi is screeching along the pavement, sparks flying, as everyone ducks out of the way.

Yet still, the PM said he is going nowhere.

How long before Johnson and Dorries are the only people left in Downing Street barricaded themselves in.

Mogg, Zahawi and Raab will eventually come up with their hands up and their eyes burning. Nobody should be subjected to watch what the PM and Dorries were up to.

They would probably see themselves as Thelma & Louise, or Butch Cassidy and the Sundance Kid but what they really are is Bonnie and Clyde stealing a living and robbing us of the chance of a brighter future.