A strike, of any kind, is one that will always make every Tory froth at the mouth. There is nothing like working people fighting to save their livelihoods to really antagonise Conservatives. 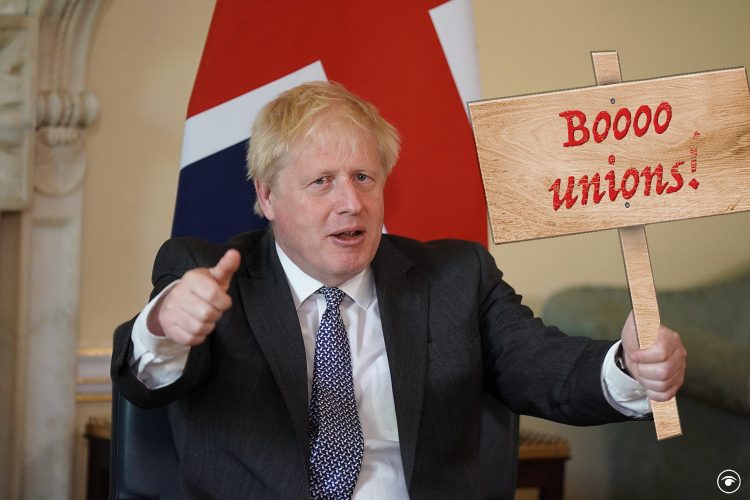 On Monday it was the Tory summer fundraiser, where someone dropped £120,000 to have dinner with the prime minister before top Tories hot-footed it down to the Serpentine for Rupert Murdoch’s bash.

All we know for sure is the PM’s nostrils were clear before he attended these events after having minor sinus surgery that morning.

But what else could he do to get the rich and powerful on his side this week? Make Paul Dacre a Lord? Nope, that’s not a glib joke.

Froth at the mouth

Well, a strike, of any kind, is one that will always make every Tory froth at the mouth. There is nothing like working people fighting to save their livelihoods to really antagonise Conservatives.

Also just for good measure, he chucked into today’s session that he is off to Rwanda this week. This is the only ticket I pray is one way.

Last week Starmer was so ineffective that hopes of a fightback were low. The Resolution Foundation has found that Brexit is an economic disaster (who knew?), but of course he didn’t mention that.

So he went on the attack over the rail strikes and the government’s demands for wage restraint while lifting a cap on bankers’ bonuses. It was an EU policy brought in after the banking crash. So-called ‘Brexit freedoms’ will have it removed.

The Labour leader asked how many meetings the government had with unions to try and stop the strikes. The answer is of course zero.

“Pay rises for City bankers. Pay cuts for district nurses. I didn’t see that in leaflets in Wakefield,” was a decent enough soundbite from Keir to be fair.

But even if Grant Shapps and co wanted to go to any union meetings, they were too busy guzzling down Champaz at Rupert’s shindig.

Now I’ve never thought of myself as a flat earth/ Hillary Clinton pizza peado type conspiracy theorist, but is it possible that the Tories wanted these strikes in a desperate last-ditch attempt to salvage the two by-elections this week?

If they can scare the voters away from the loony left by conjuring up images of not being able to bury the dead, they might just sneak through.

Johnson said that Labour MPs were on the picket line, ‘literally holding hands with Arthur Scargill’. Labour are ‘worse than under Corbyn,’ and taking us ‘back to 70s.’

The Scargill reference was a bit old school, who is he going after next week the mass trespassers of Kinder Scout?

I hate to be the bearer of bad news but the most worrying 70s revival this week is the resurgence of Polio.

Anyway, Johnson then swung his axe at the Lib Dems, saying that they will basically follow whichever party has the worst plans, to be fair they do form on this.

I have to say though that trying to blame Labour for the strikes didn’t really seem to convince the Tories, but it doesn’t matter once a strike begins it is always the left’s fault in their minds. There could be a lot more to come with teachers, postal workers,  nurses and even barristers considering walkouts.

The PM said, again, that his focus is on high-wage, high-skilled jobs. I wonder what these mythical occupations are the PM has in mind, I doubt he could think of three.

However, he is giving the public sector a pay cut so is he admitting he doesn’t think they are proficient in any way?

Well, the only public sector job we know he thinks is worth pursuing is the foreign office job for Carrie Symonds, but he seemed pretty bashful when he was asked about it today.