It comes as concerns grow about the rate at which local young people are being radicalised. 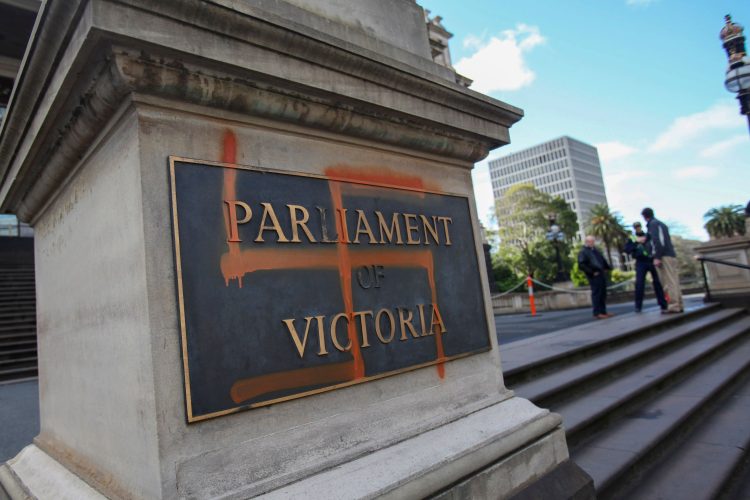 An Australian state has become the first in the country to pass a law banning the public display of Nazi swastikas.

It comes as concerns grow about the rate at which local young people are being radicalised.

The Parliament of Victoria, Australia’s second-most populous state, passed laws late on Tuesday that set penalties of 22,000 Australian dollars (£12,388) and 12 months in prison for displaying the Nazi swastika, or Hakenkreuz.

Dvir Abramovich, chairman of the Anti-Defamation Commission, which fights antisemitism, said on Wednesday he expects Australia’s most populous state, New South Wales, and the states of Queensland and Tasmania will soon pass similar laws.

“The fact that we’ve got a resurgent white supremacist and neo-Nazi movement is a cause for concern in every state,” said Mr Abramovich, who lives in the Victorian capital, Melbourne.

“What the Bill does is to say to those forces of evil that are trying to break our spirit and instil fear that the law’s no longer on their side,” he added.

The law does not prohibit the display of swastikas in certain religious and cultural contexts.

The swastika for Buddhist, Hindu, Jain and other faith communities was an ancient and sacred symbol, a Victoria government statement said.

Victorian attorney-general Jaclyn Symes said she is proud the law passed with the support of opposition politicians.

“I’m glad to see that no matter what side of politics, we can agree that this vile behaviour will not be tolerated in Victoria,” Ms Symes said.

Mike Burgess, directory-general of the Australian Security Intelligence Organisation (ASIO), the nation’s main domestic spy agency, said in his annual threat assessment in February that concerns were growing about the rate at which young people were being radicalised.

Children as young as 13 were embracing extremism, both religiously and ideologically motivated, Mr Burgess said.