How did it come to this, a human rights lawyer failing to discuss the human rights of people on board flights to Rwanda? 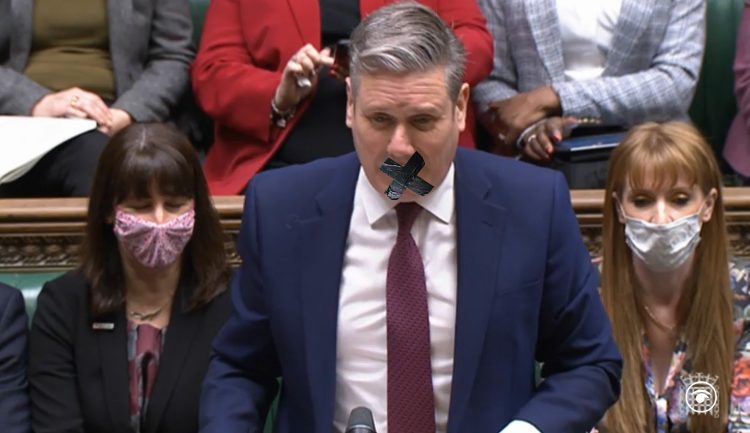 I often question my judgement, lacking the confidence of private school education and being brought up in the deepest darkest north.

However, I was of the belief that there were two news stories that everyone was talking about – one concerning the Rwandan deportation flight and the other in relation to the government breaking the law over Brexit – which might have provided useful ammunition for the Labour leader.

For Starmer, this was less an open goal than it was a chasm, a gorge, a canyon in which it was surely harder to miss than score.

As it turned out, he turned around, shot into his own net and allowed the opposition to fire balls off his backside as he lay on the floor in the fetal position.

You could judge the Labour leader’s performance by looking at Priti Patel’s face. She sat there with a smugger (than usual) smile for the entire session.

The blatant waste of public money spent on attempts to send humans on a one-way flight to Rwanda would have been most people’s first attack line to the PM.

If Starmer really doesn’t believe it is ethical, then this was his chance to say it.

How did it come to this, a human rights lawyer failing to discuss the human rights of people on board flights to Rwanda and the infringement of Brexit legislation?

Starmer managed to ask the same questions as he used last week, tackling the economy. Crucially important, of course, but not today. It was a chance to tackle the moral fibre of Boris Johnson and his government.

To mix it up a bit he used a clunky Star Wars reference (I doubt many Tory MPs will have seen it) and called the PM ‘Jabba the Hutt,’ basically fat-shaming him.

Starmer then lent in with a Love Island ‘joke’ (see above). This was crowbarred in that hard I’m surprised it didn’t detach the opposition front bench.

Next, Keir tried to embarrass Boris Johnson by reading out some nasty things his own Tory MPs have called him. As if the PM cares about that, you can’t shame a sociopath.

After that the session descended into a farce of shouting, heckling and blustering. The speaker basically gave up and it left Boris Johnson to control the rest of PMQs, it basically ended up being about ‘Labour’s train strikes.’

It’s probably true but nobody will remember that when the union-bashing gets ramped up.

To round it off Starmer decided to bring up the ‘Conservative Corbyn,’ nickname, supposedly given to Johnson, scoring another own goal.

Well, that was just a chance for the PM to bring up that the Labour leader tried to get the Islington north MP into Number 10 on numerous occasions.