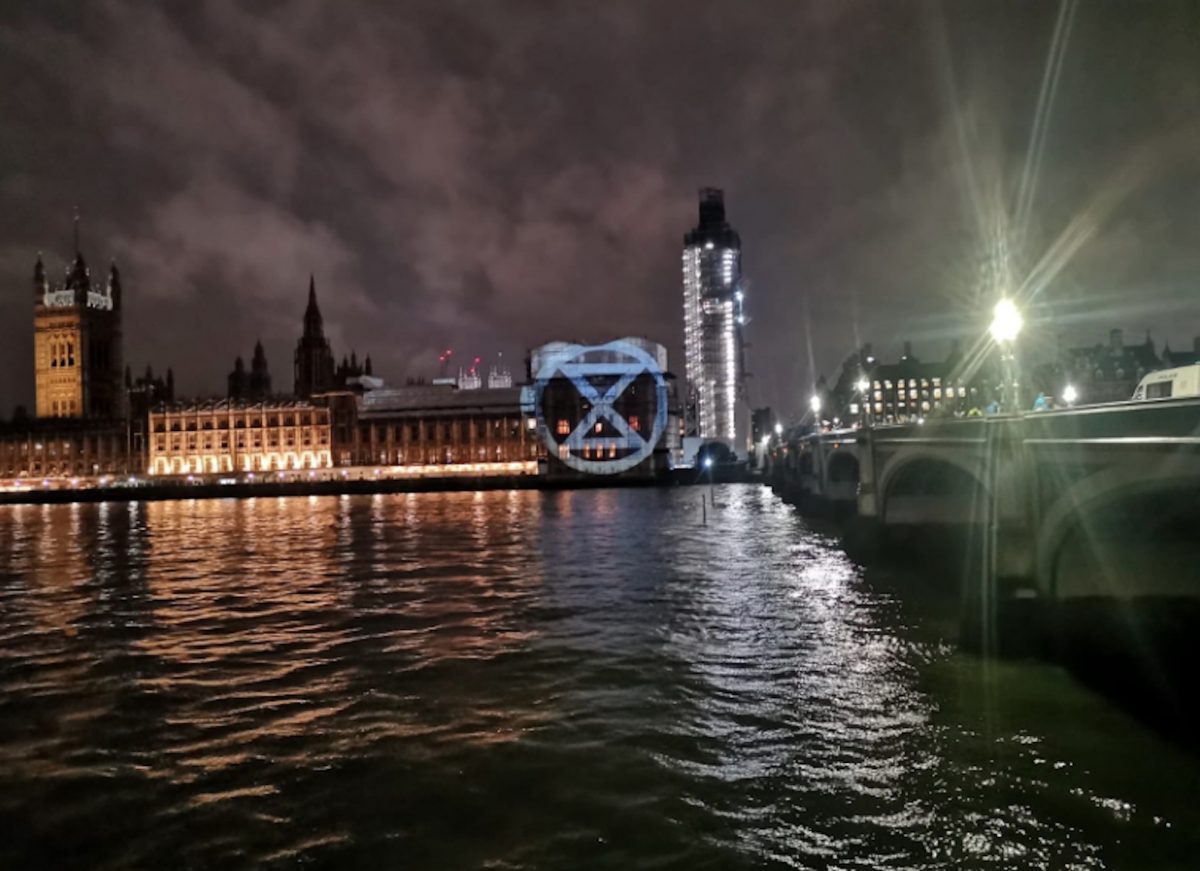 London is bracing for a second day of traffic disruptions as Extinction Rebellion’s planned two weeks of global climate change protests continue in 60 cities across the world.

Prime Minister Boris Johnson, who presides over one of the most climate sceptic governments the country has had in recent times, said the protesters should stop blocking London’s streets.

Dubbing Extinction Rebellion activists as “uncooperative crusties”, the PM called on them to abandon their “hemp-smelling bivouacs” to allow the capital to function smoothly again.

Johnson was speaking at the launch in London of the third volume of Margaret Thatcher’s biography by the former editor of The Daily Telegraph, Charles Moore.

He said the former prime minister had taken the issue of greenhouse gases seriously long before 16-year-old Swedish activist Greta Thunberg was born.

“The best thing possible for the education of the denizens of the heaving hemp-smelling bivouacs that now litter Trafalgar Square and Hyde Park would be for them to stop blocking the traffic and buy a copy of Charles’s magnificent book so that they can learn about a true feminist, green and revolutionary who changed the world for the better,” Mr Johnson said.

He added: “I hope that when we go out from this place tonight and we are waylaid by importunate nose-ringed climate change protesters, we remind them that she (Mrs Thatcher) was also right about greenhouse gases.”

Mr Johnson said he had been advised by his security staff not to attend last night’s book launch “because they said the road was full of uncooperative crusties and protesters of all kinds littering the road.

“They said there was some risk that I would be egged. And so I immediately asked the faint hearts in my private office, ‘What would Margaret Thatcher do?’

“If she could take the extraordinary risk of sending a task force halfway around the world through tumultuous seas to recapture the Falklands, I think she would have crossed the road to speak at the Banqueting Hall.”

Protesters brought chaos for commuters on Monday, closing down several streets around Westminster, as part of coordinated actions taking place around the world.

More road closures are expected today as a predicted 30,000 protesters descend on the capital.

Parliament Street, Great Smith Street, and Westminster and Lambeth bridges are expected to be heavily affected.

Westminster was awash with colour and buzzed to the sound of steel drums as climate change protesters from across the country once again brought their carnival of civil disobedience to the capital.

Extinction Rebellion activists, many in fancy dress, began what they said was two weeks of planned disruption, adopting similar tactics to their previous protest in April.

So far, the group has staked out 11 sites across the capital and almost 300 protesters have been arrested.

They began by blocking traffic from entering the roundabout at Trafalgar Square – provoking angry beeps from motorists as protesters chanted “Extinction Rebellion” through megaphones.

Two Extinction Rebellion protesters mounted a Land Rover and trailer at Trafalgar Square roundabout, one wearing a gas mask and trench coat and the other with an flag and a sign reading “stop ecocide”.

Other protesters lay under the trailer as police surrounded the vehicles.

By 6.45pm on Monday, 280 protesters had been arrested, the Met Police said.

A 25-year-old teacher from London, who took the week off to join the protests but asked to be named, said: “The plan is to shut down the whole of London.

“The issue of climate change is an issue for everyone, and it’s clear we can’t leave it to the politicians.

“I booked the week off work for this. The school kids are out protesting too.”

“I have a three-year old called Natasha. I look at her and I can’t help but wonder what the world will be like in 20 years time.”

A funeral car was later parked in Trafalgar Square, containing a coffin which read Our Future and its driver was locked to the steering wheel.

The roads behind Downing Street were blocked throughout the day by two groups of protesters, some of whom had erected tents in the street and were sat down singing songs together.

Among the group gathered at the Love Site were two young girls, Esme, 11, and Rafi, nine, who had taken the day off school to attend the protests.

Their mother Laurie, 41, said: “They’ve already done a spelling test this morning, sat down in the street, so we’re not wasting time.

“We’ve talked about the protests at home and the school knows where they are.”

“We’re here because we want the world to still be alive when we die,” said Rafi.

A group of demonstrators dressed in long silver cloaks and bearing Extinction Rebellion head-pieces called themselves the Aged Agitators, from Bristol.

Others, dubbed the Red Rebels, wore red robes and white face paint and lined up in front of a row of uniformed police officers outside the Cabinet Office.

One couple even had a wedding on Westminster Bridge in front of crowds of fellow protesters.

Elsewhere, hundreds of activists staged a sit in at the famous Smithfield meat market in protest at the carbon footprint of the meat industry.

At many sites, activists had stage and sound equipment seized by police before they could set it up.

Some protesters said they planned to set up camp and stay overnight, and called on those sympathetic to come and join them.

“Business as usual, politics as usual, is not going to get us out of this mess. We need system change, and what that requires, as history shows, is massive non-violent civil disobedience. We need to create the biggest movements there have ever been to confront the biggest crisis there has ever been,” said George Monbiot ahead of the protests.

Activists say they expect the protests to be as much as five times bigger than those held in April, which brought major disruption to London and saw more than 1,100 arrests.

Two weeks of direct action have kicked off in 60 cities around the world in what promises to be the biggest collective rebellion for the environment yet.

Over 5,000 people have signed up for the peaceful direct action to call for action now to mitigate the most devastating effects of climate change.

Reducing greenhouse emissions to net-zero by 2025

Members of Extinction Rebellion said police confiscated six vehicles as well as gazebos, portable toilets and bean bags – and have since claimed that the arrests were pre-emptive.

A protest last week saw activists spray fake blood from an old fire engine outside the Treasury in protest at funding for fossil fuels.

Extinction Rebellion is calling on the Government to declare a climate and ecological emergency, to act immediately to halt wildlife loss and to reduce greenhouse gas emissions to net-zero by 2025.

They want to see the Government create and be led by the decisions of a Citizens’ Assembly on climate and ecological justice.

What do the Extinction Rebellion protests want?

In the UK Extinction Rebellion have called on the government to act now to halt biodiversity loss and reduce greenhouse gas emissions to net zero by 2025.

According to Extinction Rebellion: “The purpose of this rebellion is to use mass participation civil disobedience to put pressure on the UK Government to achieve the real emergency action needed to tackle the crisis.  Social movements around the world have shown that nonviolent disruption can create the major changes we now need. This is an emergency.

“Business as Usual is destroying our planet’s capacity to sustain life; humanity faces a growing risk of near term societal collapse due to mass starvation, migration and war. The Climate and Ecological Emergency means the rules must change because the current system – political, social and economic – is killing us.

“We will build pressure on the state to the point where their only option is to respond to our demands for change: for truth, action and real democracy. We want each of the Government departments to outline their actionable plans for responding to the Climate and Ecological Emergency.”

What Extinction Rebellion actions are happening in London?

The group has announced 12 actions around the seat of government in Westminster.

Starting on Monday 7th October, Extinction Rebellion and allied movements aim to peacefully shut down Westminster in Central London and build pressure with satellite actions until the UK Government takes meaningful and decisive action on the climate and ecological emergency. After two weeks around Westminster, we will move offsite and pressure building actions will continue weekly.