Extinction Rebellion protesters are vowing to shut down Westminster as they demand urgent action on the climate and environmental crises. 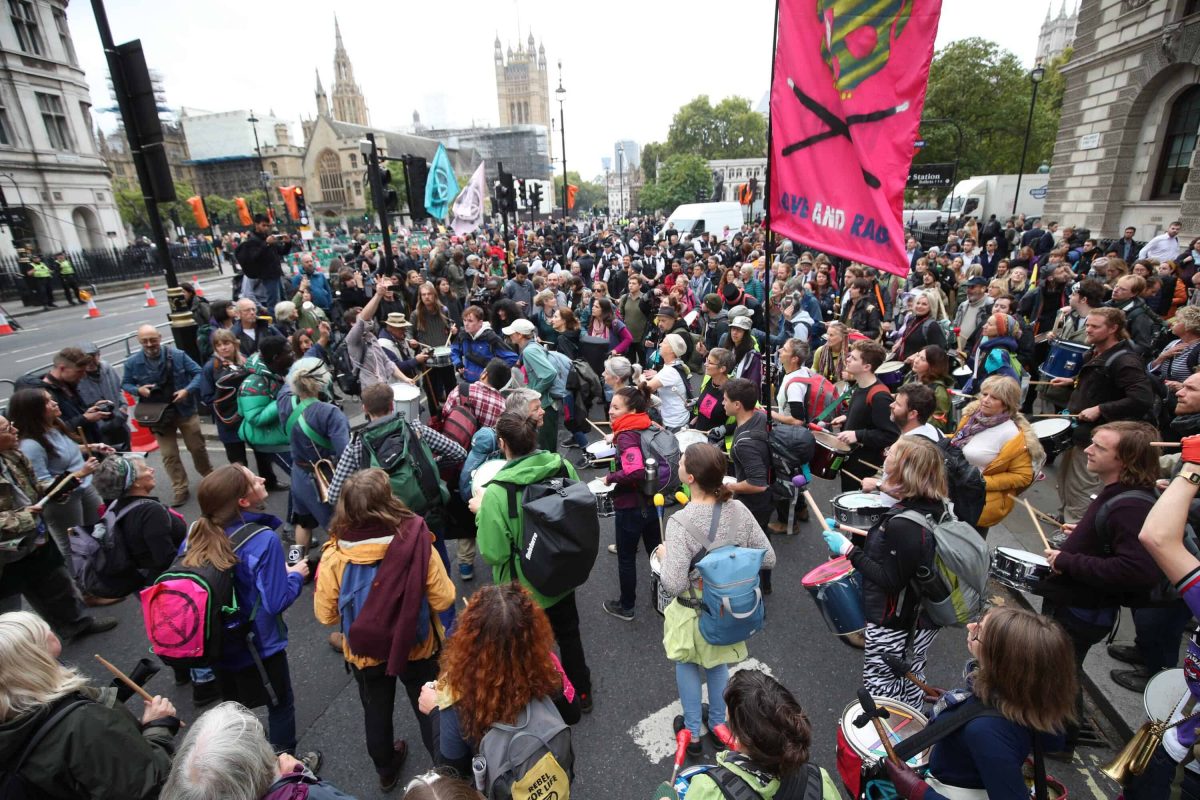 Extinction Rebellion protesters are vowing to shut down Westminster as they demand urgent action on the climate and environmental crises.

Activists say they expect the protests to be as much as five times bigger than those held in April, which brought major disruption to London and saw more than 1,100 arrests.

Two weeks of direct action have kicked off in 60 cities around the world in what promises to be the biggest collective rebellion for the environment yet.

Over 5,000 people have signed up for the peaceful direct action to call for action now to mitigate the most devastating effects of climate change.

Drumming, whistles and chanting rang through the streets as protesters attempted to block the routes into the centre of Government around Parliament and Whitehall.

The Metropolitan Police said that by 8am on Monday, 21 people had been arrested in connection with the protests.

Extinction Rebellion said those arrested included 81-year-old Sarah Lasenby, a Quaker and retired social worker from Oxford, who was part of efforts to block Victoria Embankment outside the Ministry of Defence.

She said: “The whole thing is so urgent that it is imperative the Government should take serious actions and put pressure on other states and global powers to radically reduce the use of fossil fuels, even if this means we need to reduce our comfort at home and so much flying.”

The protests are targeting the heart of Government, as part of an “international rebellion” around the world, with plans to shut the streets into Westminster including Trafalgar Square and Lambeth Bridge.

Protests will also be held outside Government departments, calling on them to outline what their plans are to tackle the climate emergency, along with processions, marches and a sit-in at City Airport.

As protests got under way in the capital, police were seen cutting two Extinction Rebellion protesters out of a car blocking off Victoria Embankment.

Traffic has also been shut down around Trafalgar Square and The Mall. Lambeth Bridge has been closed.

More than 1,000 people attended an “opening ceremony” at Marble Arch on Sunday evening, featuring meditation and dancing as “inspiration” prior to the protests.

“Business as usual, politics as usual, is not going to get us out of this mess. We need system change, and what that requires, as history shows, is massive non-violent civil disobedience. We need to create the biggest movements there have ever been to confront the biggest crisis there has ever been,” said George Monbiot ahead of the protests.

Groups of artists held a procession around Marble Arch as the protesters were told to “surround” the upcoming demonstrations with love.

On Saturday, the Metropolitan Police arrested seven women and three men on suspicion of conspiracy to cause public nuisance.

The arrests came after officers broke their way into the former Lambeth County Court building which the protesters had used to store supplies for a fortnight of protest.

Reducing greenhouse emissions to net-zero by 2025

Members of Extinction Rebellion said police confiscated six vehicles as well as gazebos, portable toilets and bean bags – and have since claimed that the arrests were pre-emptive.

A protest last week saw activists spray fake blood from an old fire engine outside the Treasury in protest at funding for fossil fuels.

Extinction Rebellion is calling on the Government to declare a climate and ecological emergency, to act immediately to halt wildlife loss and to reduce greenhouse gas emissions to net-zero by 2025.

They want to see the Government create and be led by the decisions of a Citizens’ Assembly on climate and ecological justice.

What do the Extinction Rebellion protests want?

In the UK Extinction Rebellion have called on the government to act now to halt biodiversity loss and reduce greenhouse gas emissions to net zero by 2025.

According to Extinction Rebellion: “The purpose of this rebellion is to use mass participation civil disobedience to put pressure on the UK Government to achieve the real emergency action needed to tackle the crisis.  Social movements around the world have shown that nonviolent disruption can create the major changes we now need. This is an emergency.

“Business as Usual is destroying our planet’s capacity to sustain life; humanity faces a growing risk of near term societal collapse due to mass starvation, migration and war. The Climate and Ecological Emergency means the rules must change because the current system – political, social and economic – is killing us.

“We will build pressure on the state to the point where their only option is to respond to our demands for change: for truth, action and real democracy. We want each of the Government departments to outline their actionable plans for responding to the Climate and Ecological Emergency.”

What Extinction Rebellion actions are happening in London?

The group has announced 12 actions around the seat of government in Westminster.

Starting on Monday 7th October, Extinction Rebellion and allied movements aim to peacefully shut down Westminster in Central London and build pressure with satellite actions until the UK Government takes meaningful and decisive action on the climate and ecological emergency. After two weeks around Westminster, we will move offsite and pressure building actions will continue weekly.