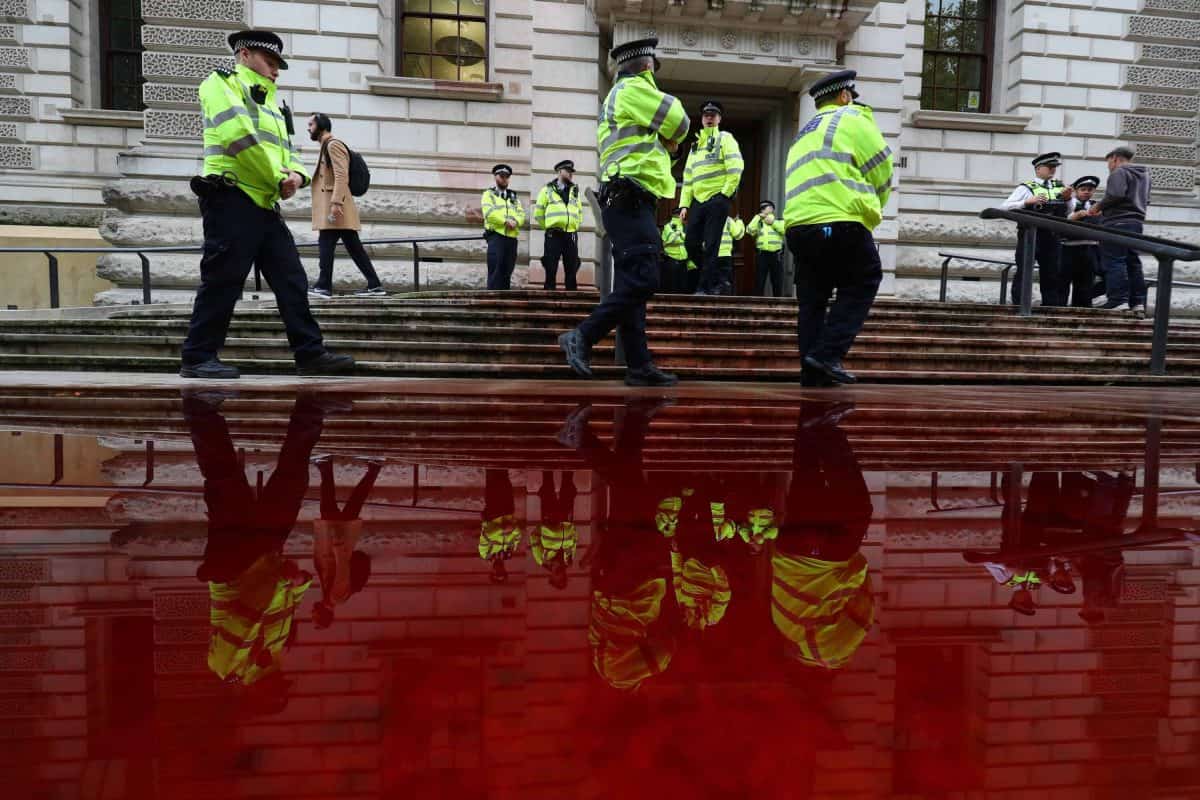 Four people have been arrested on suspicion of criminal damage after climate change activists sprayed the Treasury in central London with fake blood.

Extinction Rebellion demonstrators parked an old fire engine outside the building and a pool of red liquid – said to be 396 gallons (1,800 litres) of water coloured with food dye – lay opposite the entrance.

A police spokesman said: “Police were called at 10.17am to Horse Guards Road. People on a privately-owned fire engine had sprayed a liquid at the Treasury building. No reported injuries.

“Three men and one woman were arrested on suspicion of criminal damage.”

The campaigners said they aimed to highlight the inconsistency between the Government’s insistence that the UK is a world leader in tackling the climate emergency and its funding for fossil fuel exploration and carbon intensive projects.

At least 30 police officers surrounded the fire engine outside the Treasury building in Westminster, which had protesters standing on top of it, including 83-year-old Phil Kingston, from Bristol.

Ahead of the action, he said he was a Christian caring for the Earth as God’s creation and he was fighting “with all my being for my four grandchildren in this situation of existential danger”.

Fellow protester Cathy Eastburn, 52, said: “I’m terrified – as things stand my children do not have a future, and that goes for all children alive today.

“Around the world people are already losing their lives and homes because of climate breakdown – floods, droughts, food shortages, more frequent extreme weather events, and so on.”

And she said: “Decisions being made here in the Treasury right now – including huge subsidies for fossil fuels, financing massive fossil fuels projects overseas, airport expansion – have devastating consequences and are incompatible with a liveable future for my children and all children everywhere.”

The protest comes ahead of next week’s International Rebellion, when Extinction Rebellion protesters will take action in more than 60 cities around the world.

In the UK, Extinction Rebellion activists are urging the Government to “act now to halt biodiversity loss” and reduce greenhouse gas emissions to net-zero by 2025.

They staged the protest at the Treasury in the wake of a report by the parliamentary Environmental Audit Committee (EAC) which said billions of pounds of British taxpayers’ money supporting fossil fuel schemes around the world was undermining the UK’s commitment to tackle climate change.

Following the incident, a Treasury spokesman said: “The UK is a world leader on climate change – having reduced its emissions by 42% between 1990 and 2017, while growing the economy by more than two-thirds.

“In June, we became the first major economy to legislate to end our contribution to global warming by 2050. We will continue to build on this proud record.”