A Hoxton bar from the team behind Happiness Forgets. 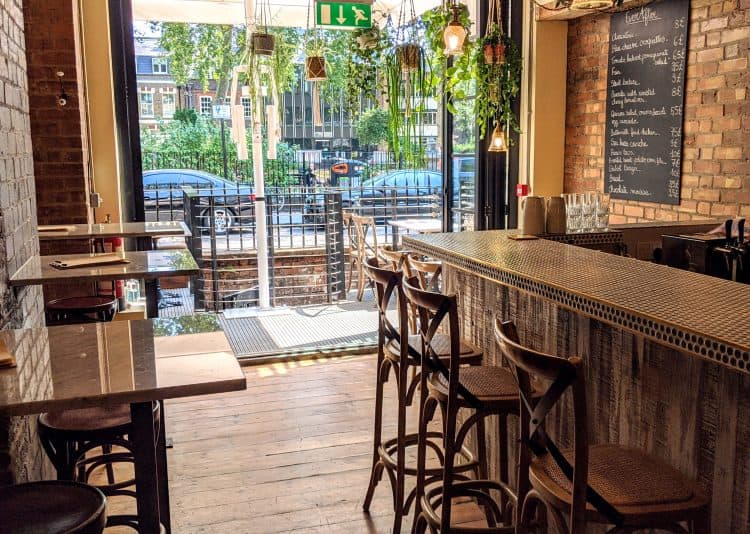 On the former Petit Pois Bistro site, Ever After initially launched last year between lockdowns, before being forced to close for months.

Now celebrating its opportunity to open properly, the cocktail bar and kitchen comes from the team behind Petit Pois and downstairs bar Happiness Forgets.

Styled on the laid-back cocktail bars of Paris, the ground-floor bar is bedecked with soft leather banquettes, bistro tables and bar seating against exposed brick walls and plenty of hanging foliage. The space also has a covered terrace, complete with heaters and blankets as the weather changes.

As for the drinks, Ever After champions both riffs on classics, as well as original serves, such as the Bloody Martini with radish infused vodka, spices and tomato and celery water; or the Negroni Rosa comprising a mix of Cocchi Rosa vermouth, Amaro, aquavit, strawberry and balsamic vinegar. A comprehensive list of non-alcoholic cocktails are also offered, including the likes of Dry Penicillin, using smoked Everleaf Forest, Lapsang Souchong, lemon, honey and ginger.

Classic martinis are a particular highlight at Ever After, with the choice of either Plymouth Gin or Absolute Elyx Vodka with Dolin dry vermouth and Kosertae white tea. They’re pre-batched and poured straight from the freezer, both classically crisp and expectedly elegant. Moreover, at £9 they’re one of the best value martinis in London. Peach Gold Rush, on the other hand, is a complex concoction of fresh peach, lemon and honey which work in harmony with the Buffalo Trace bourbon base.

Following on from Petit Pois Bistro, the food offering at Ever After is also of note, with Head Chef Joni Ketonen, having previously worked at The Fat Duck. Highlights include a chopped steak tartare with pickled onion petals, almond butter and crispy kale florets which add textural interplay and a welcome bite of salinity; and slivers of cured halibut served with celeriac and a lurid puddle of dill sauce. The famous Petit Pois chocolate mousse also makes an appearance: an absolute must-try.

RELATED: Bar of the Week: Lyaness