A rakish new late-night bar in the heart of Soho.

by Kirsty McCormack
in Bars 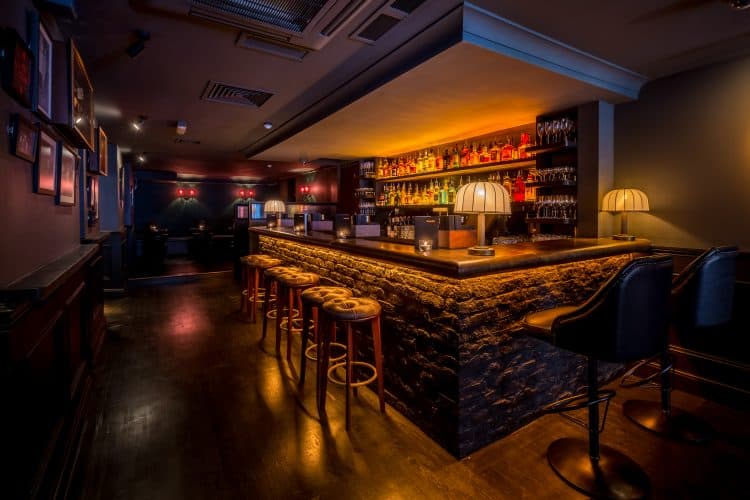 When it comes to drinking in Soho, you’re pretty much spoilt for choice, but there is a new bar that should be on your list for 2022. Louche, Soho is a brand new, rakish late-night drinking den which is finally in full swing, after a slight delay due to lockdown.

Situated on Greek Street, the 260-capacity, three-storey venue features two bars, two stages, and a fantastic cocktail menu. Louche is open six days a week and Happy Hour runs until 8pm Monday to Friday, and from 4-6pm on Saturdays. This consists of two-for-one house cocktails or half price glasses of selected wines, making it an ideal place for after work drinks.

Cocktail lovers will certainly be impressed with Louche’s offerings, including a few classics served with a twist. My personal favourite is the Louche Espresso (£11), which is a fun take on the Espresso Martini, but using rum instead of vodka as well as a topic of banana.

The Heartbreaker (£14) is also worth tasting, consisting of Eristoff vodka, Aperol, peach, passion fruit and prosecco –  it’s fruity and refreshing and well worth the extra few pounds.

Most of the cocktails are priced at £11, such as Green Monk (Green Chartreuse, melon liqueur) and What’s Poppin’ (Jack Daniel’s Honey, popcorn, egg). In fact, the only other cocktail on the list that will set you back £14 is the Pear 75, which consists of Grey Goose La Poire, peach and prosecco.

As well as an eclectic drinks menu, Louche also offers loads in terms of live music and entertainment, and April is jam-packed with various fun nights. For those intent on taking it easy with a few drinks and some music, the ground floor is the best place to be as there’s always a live DJ from 10pm – and before that there’s a general playlist, with plenty of familiar tunes.

Alongside DJ Mr Shiver on April 1st, for example, the House of Burlesque will be performing which sees an array of beautiful burlesque performers usher guests into a world of stockings, feathers and fabulousness. It’s a perfect way to kick off the month.

Upstairs at Louche, there’s plenty of live music throughout April, including soul and funk from Zealots, a party atmosphere conjured by Sharples Project, and the hugely energetic Dynamic Sound Collective.

All-in-all, there’s a bit of everything at Louche Soho. So whether you’re looking to enjoy Happy Hour, or have a full-on night out, this cracking cocktail bar should certainly be on your to-do list.