With restaurants starting to re-open this month, the government has encouraged al fresco dining where possible. 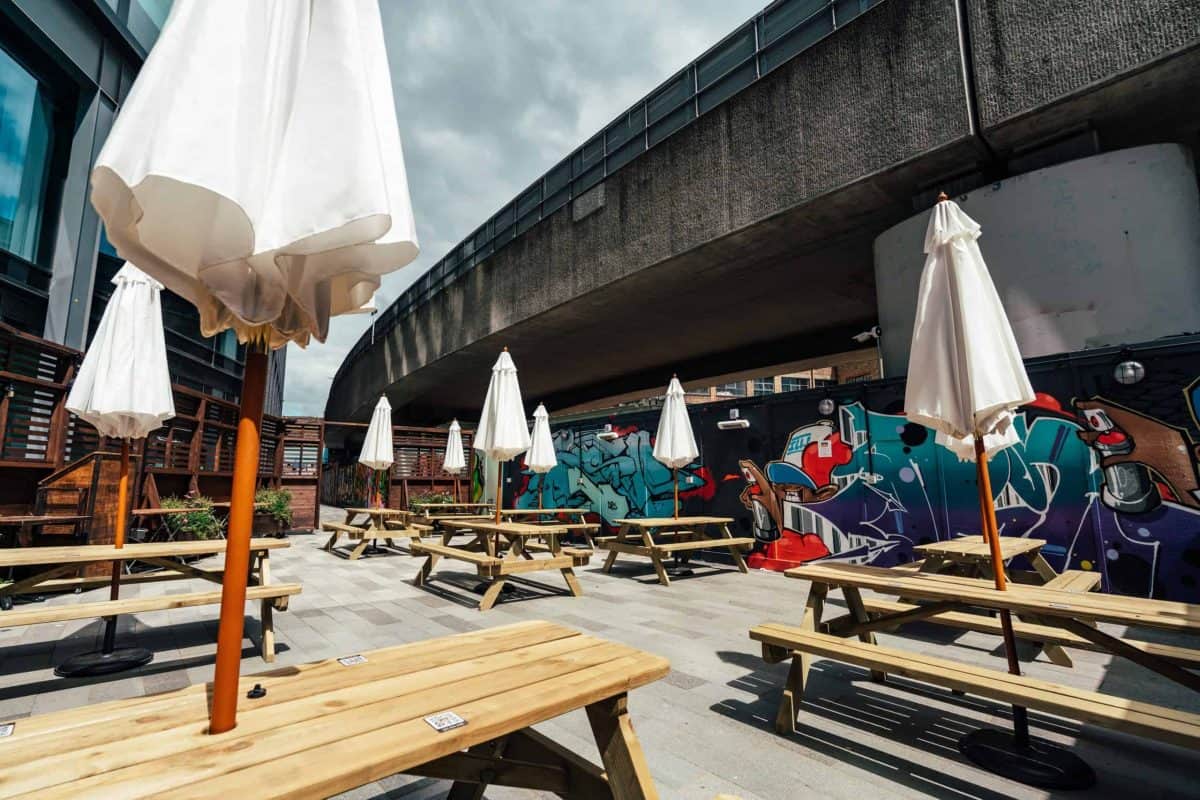 Just over four months ago, UK restaurants (alongside other hospitality businesses) were forced to close following the outbreak of the novel coronavirus. With many having opened since 4th July, governmental guidelines have encouraged outdoor dining as often as possible, with restaurants given greater freedom to serve food and drink outdoors. Hundreds of restaurants are now capitalising on their outdoor seating, or offering guests the occasion to eat and drink outside for the first time. Some restaurants have even gone so far as introducing huge new terraces. As a result, al fresco restaurant dining in the UK is more popular than ever this summer.

Having re-opened following a successful take-away and delivery operation over the past few months, one of London’s best Italian restaurants now operates as a pastifico and deli during the day, while opening as normal for dinner. Additional entrances have been introduced to easily direct guests safely in and out of the restaurant, and al fresco seating is now possible to book. A short lunch menu is available throughout the day, while a set menu is served for dinner and on weekends.

Further information can be found at ombrabar.restaurant.

For the first time since opening in 2016, El Pastor is currently accepting reservations. Walk-ins are also accommodated for the indoor or outdoor seats, with new Perspex screens surrounding the covered al fresco area. While not all staff members wear PPE equipment, hygiene is stressed. Immediately after guests leave, tables and chairs are cleaned and sanitised. A hand sanitiser dispenser is on-hand at the entrance, where diners’ temperatures are taken, as well as contact numbers. For the time being, the restaurant’s menu has also been shortened, though the classics remain available. The ‘Al Pastor’ tacos are a must-order, as are the soft shell crab and Baja fish tacos, best washed down with a Michelada, or one of the restaurant’s ‘Mezcarita’ cocktails. The restaurant’s sister sites, Casa Pastor and Plaza Pastor in Coal Drops Yard have also re-opened, with Plaza Pastor home to a large outdoor space.

Further information can be found at tacoselpastor.co.uk.

RELATED: The “new normal”? A long-awaited dinner at El Pastor

With restaurants on Southwark Street (near London Bridge station) and in Shoreditch, the restaurant famed for its Portuguese food has introduced new measures in order to protect both staff and customers. Moreover, the Shoreditch site has also introduced a brand-new al fresco terrace, with seats for 100. This sits alongside the restaurant, allowing for more spacious dining options. Staples including piri piri chicken and pastel de nata are still served alongside dishes such as batatas fritas, African rice, grilled chorizo, and prawns with garlic and chilli. The drinks menu, on the other hand, features Portuguese-inspired cocktails, such as sangria, port and tonic, and caipirinhas.

Further information can be found at casadofrango.co.uk.

For the first time since opening in 2007, Barrafina are also accepting reservations, while holding back a small number of tables for walk-ins. The Coal Drops Yard and Dean Street sites have already opened, with Adelaide Street and Drury Lane set to follow later this month. For the foreseeable future, the restaurants’ a la carte menus will be slightly shorter to allow for more distancing between chefs in the kitchen, but classics such as milk-fed lambs’ kidneys, arroz de marisco and milhojas will remain available alongside daily specials. Like many Soho restaurants, the Dean Street site has increased al fresco seating, as will the Adelaide Street restaurant. The Coal Drops Yard restaurant will also capitalise on using the outdoor space at its sister restaurant, Parillan.

Further information can be found at barrafina.co.uk.

Launched last year, Parrillan is a sister restaurant to Barrafina, next door to the Coal Drops Yard site. With all seats on the partially covered al fresco terrace. Inspired by Ibicencan restaurant C’an Pilot, Parrillan focuses on high-quality produce which is intended to be cooked by customers on table-top parrillas filled with white hot coals.  The re-opening menu features para picar dishes such as pan con tomate, and AA anchovies de l’Escala prepared in the Barrafina kitchen, plus ingredients such as red prawns, Iberian pork, and milk-fed lambs’ kidneys to be cooked on the parrilla grills.

Further information can be found at parrillan.co.uk.

Having re-opened with new safety measures, the original Rochelle Canteen is currently operating a reservation-only policy, sitting guests outside. Here, Melanie Arnold and Margot Henderson’s hyper seasonal cooking will be available in the walled garden. An urban oasis, if you like. The menu changes daily, but highlights include the likes of rabbit offal with bacon and peas; globe artichoke with vinaigrette; or courgettes with borlotti beans and mint.

Further information can be found at arnoldandhenderson.com.

Oklava has re-opened, with bookings now open for indoor and outdoor seating. First launched in 2015, Oklava sees chef Selin Kiazim draw on her Turkish-Cypriot heritage, preparing a veritable selection of modern takes on classic dishes such as lahmacun; hellim with London honey, wild oregano and lemon; or chilli roast cauliflower with red onion, parsley and pistachios.

Further information can be found at oklava.co.uk.

Ahead of re-opening its King’s Cross site, Lina Stores opened a partially-covered al fresco restaurant outside the site on Lewis Cubbit Square. Adhering to the latest social distancing advice, guests are asked to follow a clearly marked one-way entry and exit path to and from the terrace. Guests will also be able to place their orders through their phones by scanning a QR code label present on each table. Inspired by the piazzas of Venice and Rome, Lina Stores’ 75-seat terrace will serve a seasonal menu focussed on pasta. Highlights include Maltagliati Verdi with spring mushroom ragù; crab linguine with lemon, chilli and garlic; tagliolini with summer truffle and Parmigiano; and veal ravioli with salsa verde. A selection of antipasti is also available alongside classic desserts.

Further information can be found at linastores.co.uk.

Drawing on chef Elizabeth Haigh’s South East Asian heritage, Mei Mei is inspired by the Kopi Tiams of Singapore. Since the coronavirus outbreak, Haigh has had to re-think her business plan, having operated as a Mei Mei Market & Deli over the last month, with a new concept – Bā – also launched. A chef’s table-esque dining experience, Bā offers an eight-piece set tasting menu, launched as a supper club style dining experience. Open every Friday and Saturday evening, with just one sitting from 7pm, reservations are essential, and tickets must be purchased in advance. All seats are also outside. Tasting menu highlights include the likes of Heritage tomatoes with Hainanese chicken broth vinaigrette, spring onion oil, raw onion and herbs; and aged Dexter beef rib with toasted rice, roasted pepper and jus, served with nasi kerabu (blue rice).

Further information can be found at meimei.uk.

Technically, Pop Brixton is not a restaurant. The site is home to a number of exciting food enterprises, available to eat outside at the recently re-opened site with new safety measures in place to protect both staff and customers. Food and drink vendors include the likes of Halo Burger, Sakeya, Baba G’s, Studmuffin, Koi Ramen, Caribe’, Twelves and Eights, Mama’s Jerk, and Other Side Fried.

Further information can be found at popbrixton.org.

One of London’s largest al fresco dining destinations, Vinegar Yard has re-opened with extensive health checks and safety measures in place. The capacity has been capped, tables spaced to facilitate social distancing, and increased hand-washing and sanitation procedures. On-site staff members’ temperatures will also be checked daily, before each shift. In addition to its line-up of street food vendors and open-air bars, two brand-new mezzanine cocktail bars have been introduced.

Further information can be found at vinegaryard.london.

Since re-opening on 4th July, SMOKESTAK has served a slightly slimmed-down menu (as well as serving a new ‘4for10’ menu for August, making the most of the government’s Eat Out To Help Out scheme). While the dining room seating has been reduced by 30 percent, the restaurant’s 60-seat terrace is reserved for walk-ins. An ideal place to enjoy some of London’s best barbecue, inspired by America’s southern states. The brisket is a must-try, as are the crispy pig’s tails with soy molasses.

Further information can be found at smokestak.co.uk.

One the Coal Drops Yard development’s first restaurant openings, Vermuteria is an all-day café and bar from chef Anthony Demetre and designer Michael Sodeau. Inspired by the bodegas and cafes along the cycling Grand Tour routes of Italy, France and Spain, Vermuteria combines the pair’s love of food, drink and cycling. The food menu focuses on what’s described as British dishes with European twists, while over 70 vermouths are served, including a selection available on tap. The vermouth list features 50ml serves priced from £4, championing producers based in Italy, France and Spain, plus Greece and Britain. Since re-opening, all tables have been moved to the restaurant’s al fresco terrace, strategically covered and equipped with heaters.

Further information can be found at vermuteria.cc.

Famed for its focus on quality Argentinian beef, four of Gaucho’s restaurants are joined by charming al fresco terraces. The Richmond restaurant’s terrace is home to one of the oldest Plane trees in London; the Broadgate Circle site has space for 80 covers, factoring in a one-metre distance between tables to facilitate social distancing; the Tower Bridge outpost offers impressive views of the Thames, between London Bridge and Tower Bridge; and the Hampstead restaurant’s terrace has a traditional ‘Asado’ fire pit at its centre.

Further information can be found at gauchorestaurants.com.

Following the launch of a lockdown ‘at home’ experience (which is still available to order), Michelin-starred The Ninth has re-opened. First launched in 2015, the restaurant has become acclaimed for chef Jun Tanaka’s Mediterranean-style cooking, with dishes designed to be shared. Walk-ins are welcome for the main dining room and the al fresco terrace, while the restaurant is currently operating with new opening hours (Tuesday – Saturday 5:30-10pm, Friday and Saturday 12-2:30pm).

Further information can be found at theninthlondon.com.

This article was updated on Tuesday 18th August, 2020.