As well as re-opening with a 60-seat terrace, one of London’s best barbecue restaurants has introduced a new menu, offering four dishes for £10 throughout August. 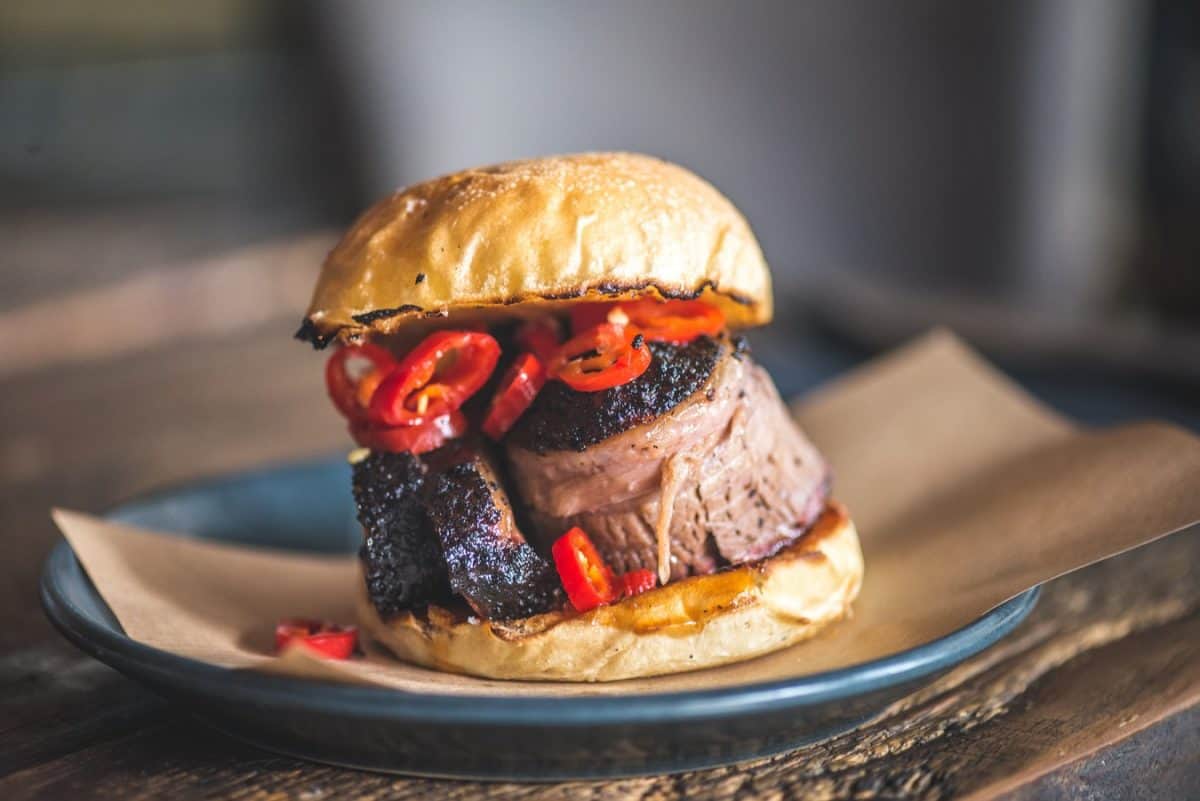 Since the government announced plans to roll out its Eat Out To Help scheme, a clutch of restaurants have launched new initiatives and deals to help customers make the most of the discounts. From Monday – Wednesday throughout August, Bubala – one of London’s best vegetarian restaurants – is opening on Mondays, serving a selection of small plates for £10, while their 10-course menu is also discounted on Tuesdays and Wednesdays. Casual Indian restaurant group Dishoom are ditching the £10 per-person cap, offering 50 per cent off food and soft drinks regardless of the total spend. Shoreditch barbecue specialist, SMOKESTAK, has also launched a new ‘4for10’ menu, serving four dishes for £10.

Following a ‘barbecue pilgrimage’ around the southern states of America, David Carter set up SMOKESTAK as a street food operation, based at Street Feast Dalston Yard. After touring the festival circuit and operating from other venues, the restaurant’s first permanent site opened in 2016. Carter has since teamed up with chef Chris Leach, overseeing operations at Manteca in Soho.

Following the success of its Saturday barbecue takeaway, SMOKESTAK re-opened on 4th July, serving a slightly stripped back menu. Here, slowly smoked meats are the main draw, sourced from Philip Warren Butchers and Swaledale, smoked over kiln-dried English oak for up to 15 hours in a state-of-the-art Ole Hickory smoker imported from Cape Girardeau, Missouri. As for the Eat Out To Help out offering, the main menu is still served, while the new ‘4for10’ menu offers a choice of starter, a meat-filled bun, side, and an ice cream for £10 after discounts, available from Mondays – Wednesdays throughout August.

On taking part in the Eat Out To Help Out scheme,  SMOKESTAK founder David Carter said: “We couldn’t be happier to be back doing what we love and sharing that with our guests. Taking advantage of the government’s Eat Out To Help Out scheme, we’ve created a menu which offers exceptional value whilst also showing support to the industry, in the hope it will encourage people to dine out and help revive the restaurant sector.”

Since re-opening, SMOKESTAK’s dining room capacity has been reduced by 30 percent to facilitate social distancing, and seats at the 60-seat al fresco terrace are available for walk-ins. Inside, the space is loud and dark, with rugged wood fixtures and exposed concrete walls lending an industrial accent that’s charming in its simplicity. Service is also charming: casual yet professional.

One of three starters available on the new ‘4for10’ menu, hunks of deep-fried pig’s tail are cloaked with soy molasses, perfectly complementing the pork fat, with glorious texture, somewhere between chicken wings and baby back pork ribs. Whipped smoked cod’s roe’s flavour is also amped up to 11: a break from the meat-centric offering, served with lightly salted corn chips.

The restaurant’s famous beef brisket buns are a must order by way of mains on the new menu. A signifier of a good barbecue restaurant, SMOKESTAK’s brisket is soft but not overly giving, rampant with fatty pockets and cloaked with a good bark. Here, it’s sliced and served in a white bun brushed with clarified butter, complete with some pickled red chillies which are sweeter than they are hot, lending an overall perfect balance of fat, salt, heat and acid. Even the restaurant’s pulled pork is exemplary, served in a bun with refreshing chilli and ginger slaw. On the side, choices include the likes of fine skin on fries with aioli; and smoky baked beans flecked with small hunks of smoked meat. A side dish greater than the sum of its parts.

To finish, the ‘4for10’ menu’s Happy Endings MALT soft serve is a must-try, served in a waffle cone, while the main menu’s sticky toffee pudding is far from an afterthought. Excessively rich, but considerably lighter than typical, it’s best washed down with the peach Old Fashioned which tastes like a combination of both the classic cocktail and a peach cobbler.

Additional SMOKESTAK menu highlights include nuggets filled with slow-cooked yielding ox cheek – arguably the cow’s greatest culinary gift – with brackish anchovy mayonnaise on the side. The 30-day dry-aged short rib, on the other hand, is relatively small at 300g but expertly executed. The beef falls away from the bone, leaving it clean, and the meat is soft but not cooked to the point of complete submission. An absolute triumph from one of London’s few barbecue restaurants worth visiting again and again.

SMOKESTAK can be found a 35 Sclater Street, London, E1 6LB.