A fun participatory dining experience from the team behind Barrafina. 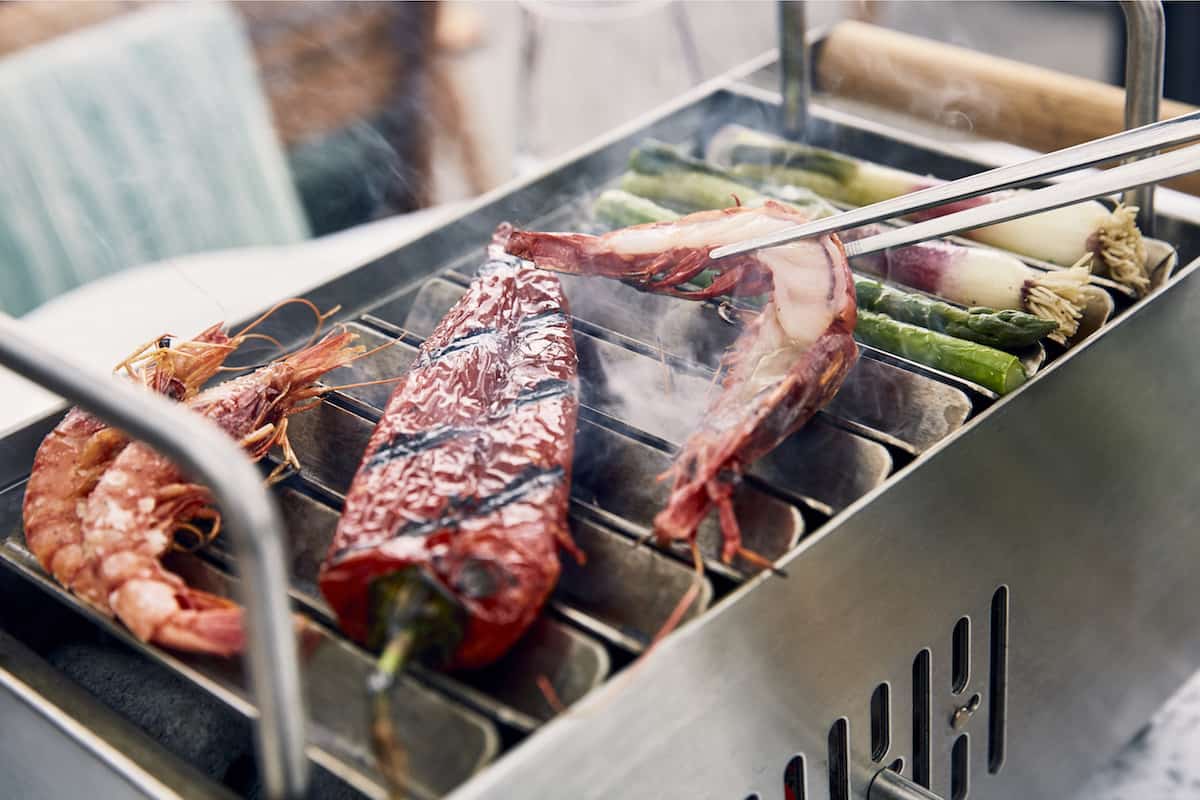 Before joining Barrafina in 2017, Barcelona-born Executive Chef Angel Zapata Martin’s most recent kitchen job was in Ibiza, working as a private chef. While on the Balearic Island, the chef paid regular visits to C’an Pilot, his favourite Ibicencan restaurant – a steakhouse at which guests are provided with a small parrilla (grill) to finish cooking their steak at the table. This participatory dining style, in turn, inspired the concept for Parrillan, a new DIY restaurant completing the Harts Group’s portfolio of restaurants in Coal Drops Yard.

Opened last autumn, Coal Drops Yard occupies a space originally used to handle to eight million tonnes of coal delivered to the capital each year, during the mid 1800s. The new Heatherwick Studio-designed redevelopment sees a parade of Victorian buildings and arches reimagined to home various shops and restaurants, located in canal-side arches fronting on to cobbled courtyards within the original ‘coal drops’ themselves. Joining London’s fourth Barrafina, Parrillan is a semi al fresco space, supplying guests with their own mini charcoal grills in order to cook select cuts of meat, fish and vegetables for themselves.

Designed with a nod towards Mediterranean terraces, whilst staying true to its location on the banks of Regent’s Canal, Parrillan’s pergola structure is minimal and lightweight. Steel beams reference the industrial surroundings, the roof is constructed using technical glass; while iroko wood chairs and banquettes are joined by traditional Mallorcan ikat fabrics and mature olive trees. Waiters fill table-top parrillas with white hot coals and wheel them to the table alongside lengthy tweezers, steadily serving a platoon of produce to be cooked over the grill; happy to answer questions as well as offering brief suggestions for cooking times and techniques.

As for the menu, Parrillan encourages a DIY restaurant experience that’s yet to quite catch on in the UK. The menu is separated, primarily, into small para picar dishes prepared in the Barrafina kitchen, plus plates or boards of produce to be grilled on the table. Compensating for the minimal cooking that goes on in the kitchen, high quality produce is absolutely vital, as is the preparation of certain ingredients: seasoning, marinating, slicing. All of these essentials were executed superbly during a recent visit.

On a typically drizzly summer afternoon, the restaurant’s glass roof and powerful heaters provided a hospitable environment, against nature’s best efforts, as we tucked into a Barrafina’s famous pan con tomate (£4 each) – one of the dishes that arrives at the table ready to eat. A superlative example of the Spanish classic, spryly chewy bread was rubbed with a healthy amount of raw garlic, crowned with vibrant grated tomato lashed with extra virgin olive oil and chives. Also from the menu’s para picar section, escalivada (£8.50) boasted a symphony of smoky roasted aubergine, red peppers and shallot, also finished with chives and olive oil; supplemented with aioli and soldiers of thin, toasted baguette. A parade of AA-grade anchovies (£12) showcased exceptional produce, simply joined by green olives, peppers and a golden pool of olive oil, best washed down with a glass of the Harts Brothers’ own Albariño.

To be cooked at the table, vegetables were helpfully blanched before arriving, including asparagus spears, spring onions and red peppers (£11), all accompanied by a selection of four sauces: most enjoyable of which was the gorgeous almond-based romesco. Thick chunks of yellowfin tuna belly (£14) were served on a skewer, cloaked with a sweet/sticky marinade and a generous smattering of salt; plump red prawns had their heads still intact (£3.50 each); ribbons of pluma Iberica (£10) were heavily marbled, demanding to be cooked in seconds and served medium-rare at most; while slices of beef picanha (rump cap) were aged for 50 days before being ready to eat, snuggled by thick ribbons of cream fat (£16). All glorious. To finish, Parrillan’s play on a Mel I Mató tart (£6) was produced using Mató from Girona, featuring a shallow base and a generous topping of honey and crushed walnuts.

One of the summer’s most interesting new restaurant openings, Parrillan’s DIY approach won’t appeal to everyone, while it’s easy to become over excited and over-order, resulting in a large bill. Otherwise, service is charming, the kitchen showcases exceptional produce, and – most importantly – the restaurant currently offers one of London’s most enjoyable immersive dining experiences.