Words by Chris Sayer There once was a time when drinking coffee from a takeaway cup didn’t come with an obligatory dash of guilt. And many moons ago, taking your weekly shop home in plastic bags didn’t mean shouldering an extra load of shame to your front door.  Yep, modern life now dictates that our […] 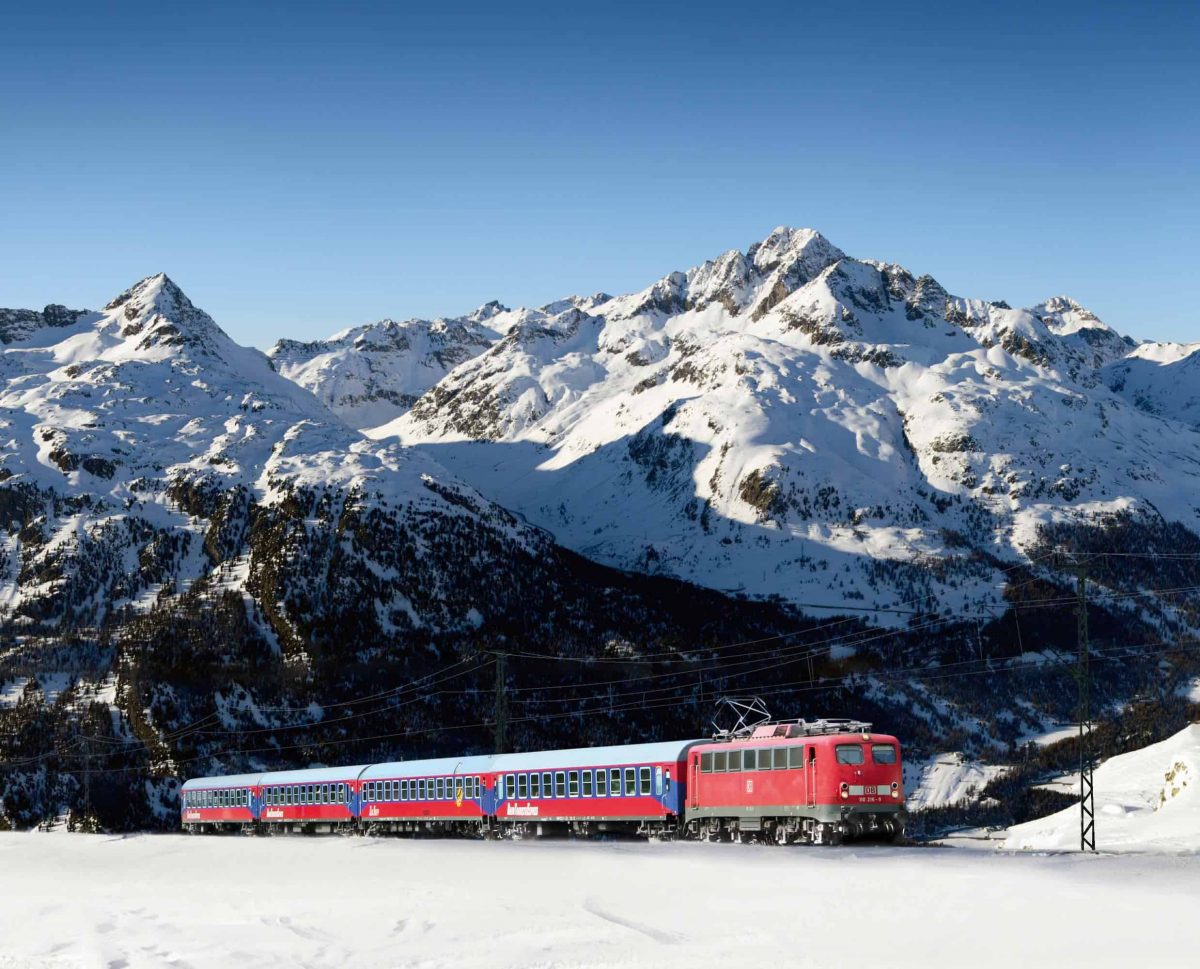 There once was a time when drinking coffee from a takeaway cup didn’t come with an obligatory dash of guilt. And many moons ago, taking your weekly shop home in plastic bags didn’t mean shouldering an extra load of shame to your front door.

Yep, modern life now dictates that our every move is eco-scrutinised by the soft tones of Sir David Attenborough, and the venomous scowl of Greta Thunberg, inside our heads – and rightly so. You only need to cast your mind back to the start of the year, when the planet was simultaneously burning and drowning, to see that our small individual actions – from eating less meat to investing in keep cups and tote bags – are all for good reason.

But what about bigger individual actions? Like our carbon-coughing winter getaways to the slopes? It’s hard to see through the irony that the very snow-capped mountains we escape to once a year are the very snow-capped mountains suffering from rising temperatures and unpredictable weather conditions caused, to some extent, by the aviation fuel burnt to get us there. As well as the chemicals used to create our new on-piste outfits.

I, for one, wasn’t prepared to pay for an extra bag of self-loathing and guilt on my snowboarding trip this winter. A decision that has led me to avoid eye-contact, at all costs, with the gigantic laser-lit conga-line of Dutch folk, currently snaking their way towards me, to the beat of ABBA, down the party carriage of the Alpen Express train.

Nobody said going green was going to be easy.

In a bid to make my precious 2020 snowboarding trip as eco-friendly and shame-free as possible, I’ve shunned low-cost airlines in favour of locomotives. First, the Eurostar from London to Amsterdam, then the past-its-best Alpen Express sleeper, which promises to drop me within easy reach of one of the finest resorts in Austria’s Tirol region in 12 hours. Research by Best Foot Forward – the pioneering eco consultancy that helped London 2012 become the greenest Olympic Games ever – shows that a typical one-way plane journey to a ski resort creates approximately 122kg of carbon per person, whilst the same journey by train will cost just 12kg. It’s a dramatically positive switch that’s seen my carbon footprint go from that of a steel toe-capped boot to a (bamboo) flipflop.

It’s also something I must keep reminding myself of as the quality of cheesy Euro-apres music blasting aboard the party carriage goes from ‘tear-off-my-ears’ to ‘leap-off-this-train’ bad. What’s more troubling, is that I’m sharing my sleeping quarters, the size of a generous boiler cupboard, with three absolute strangers. Still, I try (and fail) to get some pre-ski shut-eye as our carriage screeches and judders around every corner.

Relief sets in as I hear the breaks squeal as we slow for Wörgl, a stop that’s a 15-minute taxi to my final destination of Hopfgarten in the huge SkiWelt Wilder Kaiser Brixental. This snowy network of nine Tirolian villages makes it one of the biggest skiable domains in the world. My sleep-deprived train brain is reinvigorated, not only by a lungful of crisp Tirolean morning air, but on seeing the ski lift to SkiWelt’s snow action is approximately 18 steps from the entrance of the super Das Hohe Salve Sportresort Hotel. And, despite the allure of its comfortable rooms and unbelievably soft bed, all I want to do is stick my head under a shower and run for the gondola.

A gondola, it’s worth adding, that’s run entirely on hydroelectric power. This green, or rather blue, source of energy has been used throughout SkiWelt’s lift system for years and has recently been joined by solar power, which keeps its Sonnenlift, Jochlift and Brandstadel lifts turning too. The use of water in SkiWelt’s production of artificial snow is equally remarkable. Pop your face inside its snow cannons and you’ll find nothing but drinking-quality H2O, no harmful nasties in sight. It’s efforts like these, on top of free charging stations for electric cars and resort-wide facilities run on renewables, that helped earn SkiWelt the title of Environmentally Friendly Ski Resort of the Year in 2018 by skiresort.info (the world’s largest test portal for ski resorts), and Ecological Resort of the Year at the 2017 World Snow Awards. That’s one super clean awards cabinet.

It’s not just what’s on the mountain that’s going green, but what we wear on our bodies and strap under our feet, too. The fashion industry’s filthy (but poorly kept) little secret is the enormous amount of pollution it creates, be it through the chemical dye it all-too-often uses, or the lofty peaks of landfill it contributes to. Couple this with the ‘new season, new jacket’ culture that surrounds snow sports, and us powder-seekers may well blush. And those skis and snowboards? At their core, more often than not, is wood, which means a CO2-sucking tree somewhere has been felled just so we can use it to slide stylishly down the snow.

Changes, though, are afoot. With my old snow coat positively threadbare, I’ve invested in one of The North Face’s Brigandine jackets, a popping green, pro-tested beauty that’s a part of the brand’s new FUTURELIGHT range – game-changing waterproof, durable and sustainable outerwear tech that’s made from 90% recycled materials. My snowboard, too, ticks plenty of eco boxes. The outrageously fun Jones Snowboards ‘Mountain Twin’ I’ve stuck to my soles is crammed with sustainable wins: recycled steel edges, wax made from bio-degradable materials, a top-sheet produced from castor beans, a design created with water-based inks, and a wood core from an environmentally responsible FSC (Forest Stewardship Council) source. In all, if Greta Thunberg were to pull up her goggles and strike up a conversation next to me on this water-powered gondola, I’d be plenty ready.

With the bubble lift doors open, it’s finally time to explore SkiWelt’s slopes. First and foremost, it’s clear this isn’t a destination for gnarly backcountry freeriders – family-friendly on-piste riding is very much the order of play here. And with 90 lifts linking 284km of meticulously groomed corduroy – created with state-of-the-art eco-conscious pisten bully GPS technology  – to get your edges into, you’ll never be left wanting for more. So (rightly) proud is SkiWelt of its pistes that they open them up after hours, too. Night skiing is a must, as I soon discover when the floodlights go up and I come down the largest night-riding area in the whole of Austria, with only a handful of fellow riders to tear up the neat icing-sugar pistes with.

Thankfully, with no late-night falls or spills, the only icing sugar I’m getting a mouthful of is on top of the second gut-busting Kaiserschmarrn of the day. You’re never far from traditional Tirolian fare, like the gigantic plate of smashed-up pancakes with apple sauce in front of me, in SkiWelt –  the resort claims to have a restaurant for every 3.3km of piste, including the stunning rotating panorama terrace of the Gipfelalm Hohe Save at 1829m, the first of its kind in Austria.

Slamming the handbrake on my Veganuary plans, unless I’m to settle for a salad sandwich with fries, I’ve no choice but to revert to my carnivorous ways. With menus of paving slab-sized pork schnitzels, bubbling meat fondues, baths of steaming beef goulash and wieners with skin-snaps loud enough to set off an avalanche, this is one environmental consideration that’s out of my control. But one for which not all hope is lost.

“I made that cheese with my own hands, just up there,” one restaurant owner proudly tells me pointing out the window at her nearby barn, after dropping a plate on my table. “Is it good?” Of course it is I say, casting an eye at a set of giant cheese-churning arms that could do me some serious damage. I soon realise that these locally sourced, small-scale, hand-reared and air-mile-free ingredients are par for the course up here. Animal welfare, no chemicals, minimal surplus – it’s the kind of food production our planet is crying out for. And it’s an unexpected eco-win that I’m happy to raise a toast to at my final table of the trip, with a fiery blueberry schnapps – made by the proprietor with fruit from within reach of her alpine bar’s front window, no less.

Where to stay: Double rooms at hohesalve.at/en from around £135 a night