As school children protest in over 100 countries today for more to be done to tackle climate change, the Swedish girl who started the global campaign has been nominated for the Nobel Peace Prize. The School Strike For Climate movement started when Greta Thunberg, 15, began striking from school and protesting outside the Swedish parliament […] 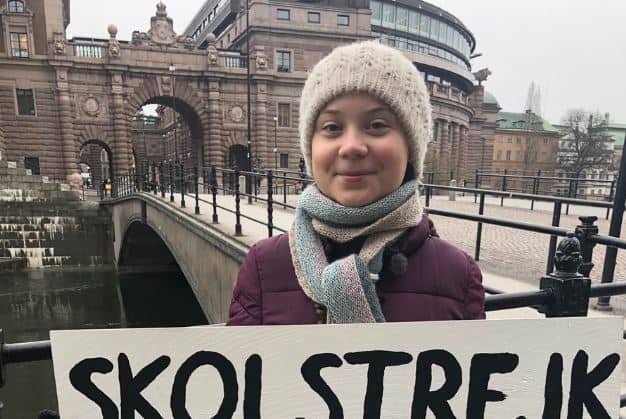 As school children protest in over 100 countries today for more to be done to tackle climate change, the Swedish girl who started the global campaign has been nominated for the Nobel Peace Prize.

The School Strike For Climate movement started when Greta Thunberg, 15, began striking from school and protesting outside the Swedish parliament in Stockholm last year for more to be done to fight climate change.

Her story travelled around the globe, and soon school children were joining her in her school strike every Friday around the world.

Today is expected to be the biggest ever school strike, calling on world leaders to do more to ensure the world children inherit will not be irreparably ruined by man-made climate change.

Strikes are expected in over 2,050 towns and cities in 123 countries, with thousands heading to Parliament Square in London too.

“We have proposed Greta Thunberg because if we do nothing to halt climate change it will be the cause of wars, conflict and refugees,” said Norwegian Socialist MP Freddy André Øvstegård. “Greta Thunberg has launched a mass movement which I see as a major contribution to peace.”

Greta Thunberg said she was “honoured and very grateful for this nomination” on Twitter, vowing to carry on the school strike protest “for as long as it takes.”

Greta Thunberg who is also very open about her Aspergers would be the award’s youngest winner.

Afghan schoolgirl Malala Yousafzai won the Nobel Peace Prize aged 17 for fighting for all children’s right to education despite the Taliban attempting to murder her to supress the education of girls.

A spokeswoman for the Prime Minister said the disruption caused by the climate change walkout will “increase teachers’ workloads and waste lesson time that teachers have carefully prepared for”.

In contrast, Labour leader Jeremy Corbyn backed the walkout, tweeting: “Climate change is the greatest threat that we all face but it is the school kids of today whose futures are most on the line.

“They are right to feel let down by the generation before them and it’s inspiring to see them making their voice heard today. #SchoolStrike4Climate.”

Germany’s Angela Merkel and Ireland’s Leo Varadkar were among many who expressed their support too.