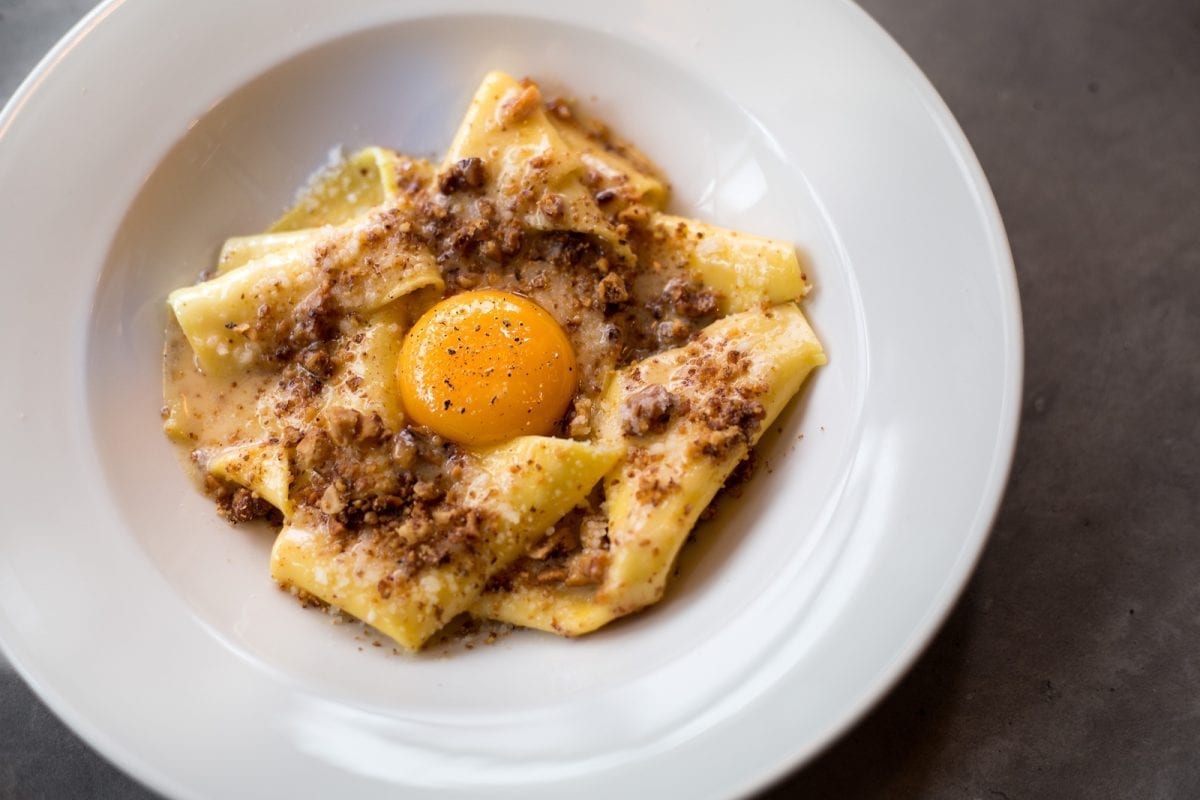 London’s craving for accessibly-priced fresh pasta dishes shows no signs of waning in 2020. This year has already seen the launch of a new Padella – arguably the city’s most popular example of the blueprint, as well as second Pastaio, Lina Stores and Bancone sites that have also opened over the past few months.

Occupying the former Foxlow Soho premises, Bancone Golden Square (actually on Lower James Street) follows the success of the Covent Garden original. Inside, counter seating is still a prominent focus (‘banconi’ literally means ‘counters’, in Italian) with the marble surfaces wrapped around the new 4,000 square-foot restaurant, with counter space for 90. Elsewhere, the considerably larger restaurant also has a basement space with a separate cocktail bar. In addition to the counter seating, some tables are scattered around the ground-floor dining room, positioned around an olive tree that works as the key interior focal point. During a Friday evening visit, the restaurant was sympathetically lit and atmospheric, while loud music played throughout the room. Service was fittingly casual and efficient without being hurried. It’s also worth noting that reservations are accepted at Bancone.

As for the menu, much of the restaurant’s signature pasta dishes have been brought over to the new site, with Culinary Director, Claudio Melis (formerly of Michelin-starred In Viaggio Ristorante), and Head Chef Stefano Cilia having created a selection of new dishes. Bancone’s wine list is also impressive, filled with an extensive collection of European-leaning bottles, with a fair by-the-glass selection.

From the menu’s ‘antipasti’ section, dinner began with a round of dense, cakey focaccia, generously studded with cloves of roasted garlic and slathered with honey – a strong introduction (£4). A dish of hand-picked crab meat was served with a slightly sweet melon sauce and small hunks of grapefruit, whose tartness contrasted the sweetness of the sauce and the crab, bringing balance with the help of some salmon roe (£9). Meanwhile, a ball of fried polenta was filled with molten gorgonzola, dusted with nutmeg and served on a bed of wilted leeks and a whisper of coppa: Italy’s finest cured meat export (£7.50). Another well-balanced dish, far more opulent than the crab.

On to the pasta, it’s unsurprising that the ‘silk handkerchiefs’ have become a particular favourite at Bancone (£9). Thin ribbons of pasta are joined by a thick sauce rampant with butter and walnut, crowned with a perfectly cooked egg yolk – accompaniments that compensate for the very slight overcooking of the pasta itself. Elsewhere, the squid ink tagliolini’s presentation isn’t necessarily for the feint-of-heart, with the hot pasta’s steam forcing the garnish of bonito flakes to shimmy, writhing as though plucked from a 1940’s horror film. The cooking of the pasta was spot-on, however, as was were the hunks of squid, supplemented by some confit tomato, garlic and a hum of chilli (£13).

Best of all, venison ragù featured a generous amount of slow-cooked meat, teamed with a generous fistful of rosemary and garlic, while the sauce itself was somewhat creamier than were typically subjected to in the UK (£12.50). A welcome relief, tossed with ribbons of well-cooked pappardelle and an additional shaving of parmesan. Naturally. A reasonable dessert menu is available, but I’d suggest saving room for another exemplary pasta dish.