“We got eight inches last night,” one girl told me enthusiastically, her friend nodding approvingly. She was, unbeknownst to me at the time, talking about snowfall. This type of ski jargon regularly caught me off guard during my first trip to the slopes. Each time I heard something questionable (‘champagne powder‘ and ‘skinning up’ among them), I’d […] 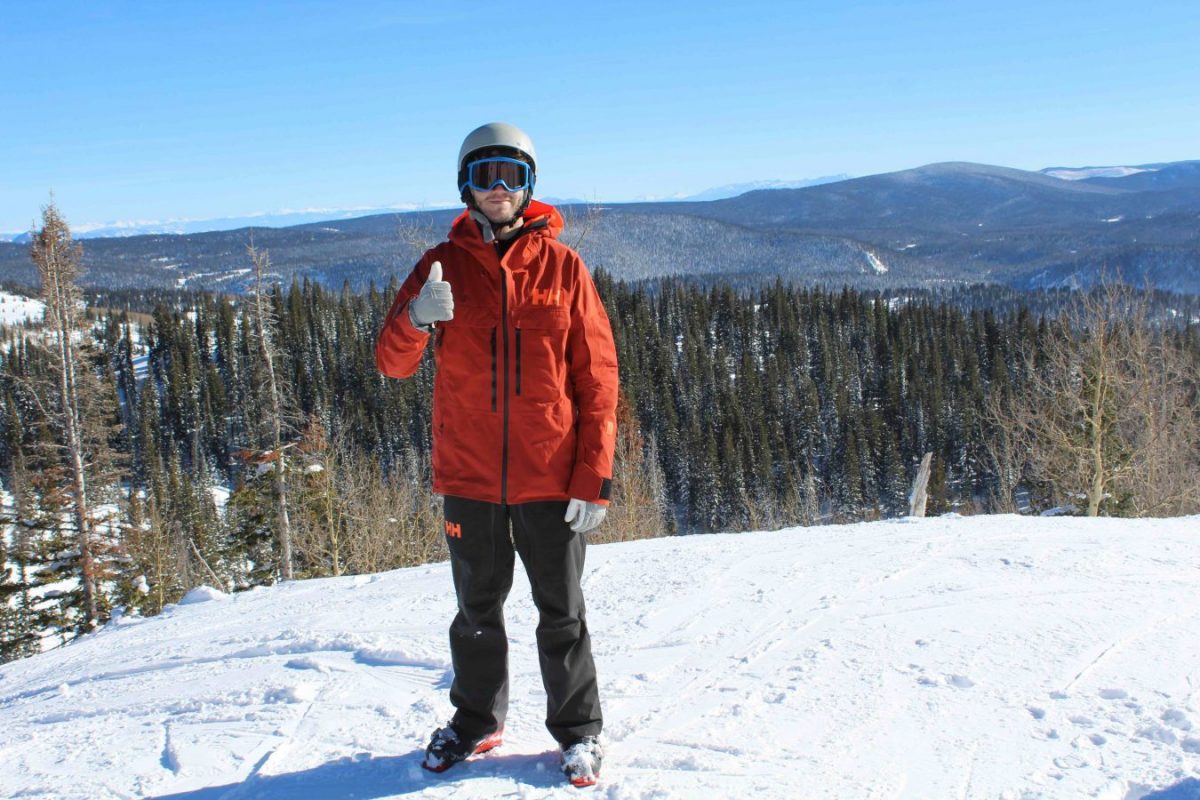 “We got eight inches last night,” one girl told me enthusiastically, her friend nodding approvingly. She was, unbeknownst to me at the time, talking about snowfall. This type of ski jargon regularly caught me off guard during my first trip to the slopes. Each time I heard something questionable (‘champagne powder‘ and ‘skinning up’ among them), I’d turn to the experienced skiers in the group open-mouthed looking for validation.

Day one: Peaking too soon

On my first day on the slopes, I was keen as mustard. I was finally going to learn to ski at 28-years-old. It was always something I’d fancied giving a go, but skiing isn’t something people from Middlesbrough do, at least not people I grew up with anyway. I’d missed a ski trip a few years ago thanks to a chronic chest infection, but finally, this time, I’d made it.

I was at Copper Mountain in Colorado, a short drive from Denver, getting my first ever ski lesson. Soldiers from the Mountain Division used to train at Copper before it became a resort back in the 40s in preparation for WW2. The scenery there was Narnia-like and reminded me that everything always looks more romantic when covered in snow. As for me, I was kitted out head to toe in tangerine orange, cutting-edge Helly Hansen clobber. I had all the gear and no idea. Apparently, the conditions were perfect for learning, so it felt like everything was falling into place. Then, about one hour into the lesson, I began to question why people skied at all.

My hands were frozen to my gloves, the way ice pops stick to the inside of a freezer. My chest was tight from the dry, cold air. The bitter wind cut my face. My ski boots penetrated the front of my legs like a cheap pair shin pads. And, to top it all off, some of the other people in my group seemed a little dim-witted. How on earth could they not make a simple V shape with their skis? Especially when most of them had skied before? The longer they practised, the more bored I became.

Fast-forward two hours and I was mentally signing up to do a ski season. What happened between those two points was the act of skiing. I can honestly say that hurtling down a mountain on two glorified pieces of laminated flooring is nothing but exhilarating. And somehow, against all of the odds, I didn’t fall over once on day one. Not through skill, or finesse, but because I couldn’t turn, or stop.

My technique was to just keep going. So there I was, tearing down the nursery slopes like an excitable 6ft 2” man-child attached to a turbo-charged Scalextric, barely gripping to the track and refusing to stop for any man, woman or child. I was invincible. Jacob, my teacher, with his positivity and reassuring words, had created a monster. I’d only been on skis for less than three hours and honestly thought I was on track to become a winter olympian.

The following day we headed a few hours down the road to Steamboat or Ski Town. A place that’s produced more winter Olympic athletes than any other town in North America (98 in total). “Kids from here ski before they can walk,” a local told me – something I still doubt today. I also met a guy who skied 100 days the previous year. He was 82-years-old. Then to top it all off, at a restaurant one night, a waitress recounted a story of a local lady who went from never having skied before who went on to win an Olympic medal in less than three years. It was all beginning to feel very serendipitous.

It was at Steamboat Springs, a few days later, however, that I was given the slap in the face I needed to shatter my premature Winter Olympic dreams. That blow came in the shape of an errant Slow Down sign. And by errant, I mean a perfectly-placed sign located beside a ski lift. I managed to fall off one of those too. I was reaching for my rucksack as the lift swung towards the landing area, and as I did, I accidentally put one of my skis vertical. It dug into the bank and I tumbled face-first into a pile of the white stuff. The lift, still carrying my shocked but sniggering ski partner, continued over my head before grinding to an embarrassing halt.

Day two: Getting piste off

But let’s focus on the positives. My second day on skis, and my first day at Steamboat started well. I was under the watchful eye of a new ski teacher called Joe – a tall, dainty man with an endearing nature and sincere love of Labradors. After teaching me how to take things to the next level – showing me how to stop, as well as how to perform C turns, J turns and an odd maneuverer he called ‘patting the dog’ (something I’m yet to find in a ski manual) – we went up to my first green run. I didn’t know what it meant at the time, but it felt like progress. We were finally on a proper ski lift anyway.

We bypassed the nursery slopes and climbed the mountain. According to other guests at One Steamboat Place, this is one of the selling points of the resort. It was a bonus, they said, that beginners were able to climb the mountain and mix it with the big boys despite having little experience. I was told if I was in Europe, I’d have been stuck down the bottom with the slow-learner brigade, which would have probably led to me never skiing again. The accommodation was pretty spectacular there too, big European-style chalets with roaring fires, hot tubs and, my favourite thing of all, a hot chocolate station with heaps of marshmallows and whipped cream.

Back on the mountain, after a pleasant journey on my first proper ski lift, Joe began to work on my form, or lack of it. “I want to see big C’s in the snow”. He’d say encouragingly. Then after a little while, he was happy I’d be able to tackle the green slope. I was full of confidence having only fallen over once or twice patting an imaginary dog earlier that morning. But this wasn’t to last long.

The green slopes were more challenging. They were actual hills. The snow felt quicker too. And on my way down people flew past me, the way a Ferrari would overtake a milk float on the M1.

The run itself was wide, like a snowy dual carriageway, only full of well-to-do people on skis. Each time Joe stopped to talk – to point something out or tell me what I was doing wrong – I’d switch off and look at my surroundings. The sky above us was as blue as a Swede’s eyes. The trail cut through an enchanting forest of silver glistening Aspen trees and led down to the resort, which looked like the inside of a snow globe.

My first real ‘wipe out’ knocked me out of this fairy-tale land. The second dented my pride. And by my sixth, I was ready for home. I’d gone from Bode Miller to Eddie the Eagle. Joe didn’t seem concerned, though, so at the end of the day, I told myself that, because I could now stop myself from careering off the edge of a cliff and turn (even though it was only to the right), I was getting better. “I’m just on harder runs”, I’d tell myself on the way down to the chalet.

After a few post-ski bevvies in the fancy residence suite, and a dip in the geothermal springs down the road – which got rid of my aches and pains, placebo or not – I was keen to get back out on the slopes the next day.

I got up early and decided to tackle my first blue run. I say decided, I was forced against my will by more experienced skiers. Some would call it peer pressure, I’d call it bullying with smiles. Either way, as a stubborn, Northern man I couldn’t back down. The run we were to tackle was significantly steeper than anything I’d faced previously. Broad and glimmering a little with a sharp left turn (dear reader, I reminder that I couldn’t turn that way). Not only that, I out, for the first time, without a teacher and something felt different. Without the steady guidance or reassuring words of Joe or Jacob, it felt like someone had taken off my safety harness.

Then, as soon as I began my first descent on a blue trail, I knew I wasn’t ready. Everything I’d learned went out of the window. There I was, desperately leaning back on my heels, trying to get as close to the mountain as I could (not a good idea). I tumbled down the slope like a drunk uncle dropping into a half pipe, blindfolded and on roller skates.

At the bottom, the others re-assured me that I’d done a good job while fighting back smirks and deciding to go off on their own from there on out. I again began wondering why on earth people skied at all.

After perhaps my sixth or seventh consecutive fall, I dusted off the snow from goggles and sat for a few minutes on the bones of my frosting backside. Runaway kids, no higher than my knee, shot down the mountain, with big smiles on their faces, pursued by frantic-looking parents. It reminded me of what I’d enjoyed most about my first experience skiing.

That thrill you get when you first speed down a hill. The adrenaline which kicks in when you come unnervingly close to the edge of a cliff. The mental challenge of picking yourself back up and going again when you’ve fallen. The cold, fresh air which clears your lungs like a course of antibiotics. The mesmerising white-capped mountains sprinkled in trees. The well-groomed, meandering trails that carve their way through thick woodland. The feeling you get when you first kick off your ski boots and realise you don’t have shin splints. The first sip of hot chocolate after a day on the slopes. Sitting in a hot tub when it’s -20 out, your eyebrows frosted, but your body warm.

Or, in my case, the sense of accomplishment you get when you finally learn to stop. This, I decided on the flight home, is why people ski.

Getting there
Return flights with Icelandair from London Heathrow to Denver via Reykjavik from £487 per person during the winter season. www.icelandair.co.uk

Where to stay
Budget: Rooms at Tucker Mountain Lodge from £132 ($173) per night. www.coppercolorado.com

Blow the budget: Four bedroom lodge at One Steamboat Place from (£1,388) $1,816 per night.
www.MovingMountains.com