Having finished eighth in the previous two years, Arteta took Arsenal to the cusp of a Champions League return. 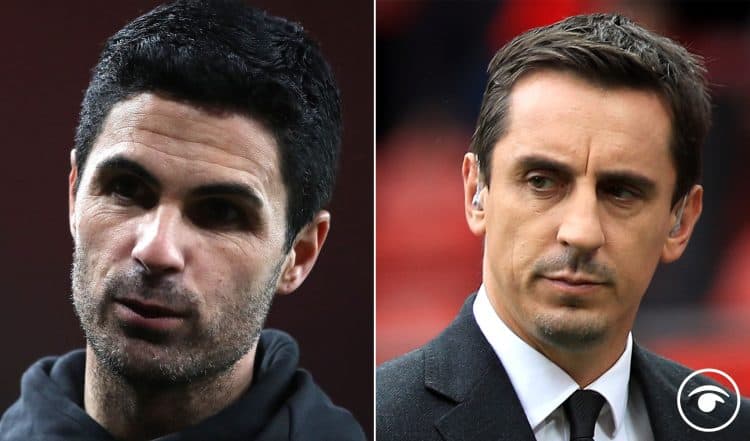 Mikel Arteta is working with the best Arsenal squad of his tenure, according to technical director Edu.

Gary Neville isn’t as confident though, he said “I just worry about the experience in terms of a young manager,’ on The Overlap.

He went on: ‘To be fair, it’s not unfounded, the evidence is there! Last season, Arsenal should have finished in the top four. But, in the end the experience of Antonio Conte, the experience of the Tottenham Hotspur players (meant they didn’t).

‘In that game, Spurs’ experience on that night it was alarming how naive Arsenal were and how short they were. My concern is just purely around (that).

‘I know Chelsea and Manchester United are struggling a bit in terms of where they are and they might both blow up, but I think will both have to happen in order for Arsenal to land in the top four.’

If that wasn’t enough Granit Xhaka called his manager a ‘freak.’

But it’s not as bad as it sounds. Xhaka explains: “He is a freak in a positive way.

“Without him, I would not be at this football club anymore.”

Jamie Carragher is more positive than Neville about Arteta and Arsenal’s chances this season.

In response, Jonny Sharples tweeted: “In a teaser clip for All Or Nothing: Arsenal, Mikel Arteta is shown preparing his side for a trip to Goodison Park by getting them train to the sound of Everton fans booing their own team.”

Related: On this day 23 years ago Arsenal signed Thierry Henry and the rest is history