It has been claimed that Manchester United and Chelsea are both keeping informed on the future of Jamie Vardy. 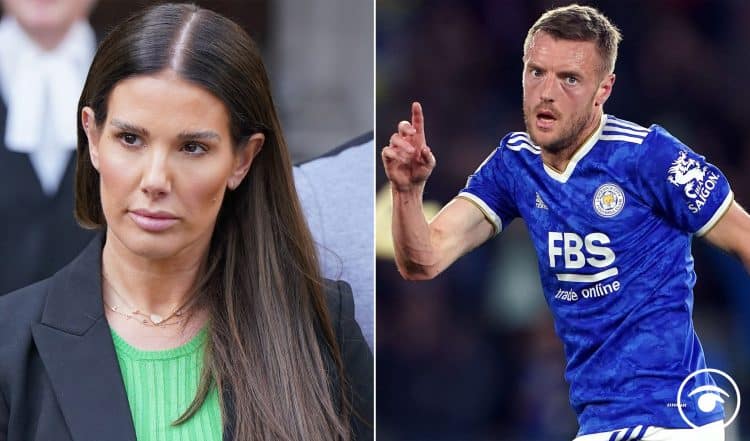 Leicester City’s Jamie Vardy has had a tough time of it lately, but still had time to send a classy message to Kasper Schmeichel.

It comes as his wife Rebekah lost her court battle with Colleen Rooney hit the front pages she opened up in her first interview.

Mrs Vardy opened up to TalkTV’s Kate McCann about how she thought the case was presented in a “misogynistic way”.

McCann asked whether she thought the scrutiny by the media surrounding how she and Rooney dressed during the trial was influenced by sexism, to which Vardy replied: “Totally – the whole thing was presented in such a misogynistic way.”

Vardy also reflected on how it has affected her personally since the original post in 2019, admitting there were points where she felt she “didn’t even want to be here anymore”.

Kasper Schmeichel has completed his move to French club Nice after agreeing a three-year deal to bring an end to his 11-year stint at Leicester.

The goalkeeper joined the Foxes for just £1.5million in 2011.

He helped make history for Leicester, helping them win the title in 2016 and captaining the club to FA Cup glory last year.

Danny Ward is now the club’s No 1, though they are expected to seek back-up for the Wales international.

Vardy shared a picture of the two of them and wrote: “Kasper, it’s been a pleasure mate. All the best.”

It has been claimed that Manchester United and Chelsea are both keeping informed on the future of Jamie Vardy as his Leicester runs down his contract at the King Power Stadium.

He is now in the final 12 months of his current deal in the East Midlands and the prospect of an unlikely Leicester exit is now beginning to gather pace.

Rebekah Vardy shared some abusive messages sent to her and her footballer husband, “You dirty f***ing slag. I hope Vardy’s leg gets broke (sic).”

Ms Vardy said: “It doesn’t matter what people’s opinions are about me, they shouldn’t be attacking my husband or children.

“I draw the line when you subject them to vicious, disgusting hatred, and abuse my husband.

“This has nothing to do with him. It was these threats that got my attention and it is hurtful.

Related: Rodger’s message to Newcastle, Chelsea and Arsenal as they sniff around his stars