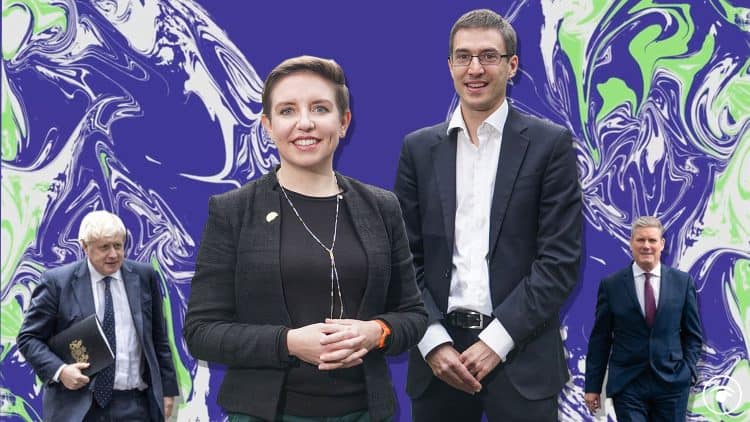 In an assuming conference hall in Birmingham, on a blustery October afternoon, the new co-leaders of the Green Party are introducing themselves to the public. It is less than two weeks until the world descends on Glasgow for COP26, and a few days since Boris Johnson unveiled his plan to reach net zero by 2050. The ground, you’d think, is fertile for green politics.

Carla Denyer and Adrian Ramsay, elected earlier this month, certainly think so. “There has never been a bigger need for the Green Party,” says Denyer, short-haired and bright-eyed. “The chance is there for the taking,” Ramsay, who has a bit of ‘substitute maths teacher’ about him, agrees. Their speech is, truth be told, a bit awkward. They share a lectern, one saying their piece before a carefully-choreographed step-aside to let the other take over, like two undergraduates doing a freshers’ week take on Elton John and Kiki Dee. But delivery aside, it covers a lot of ground.

There’s policy for both the long and short-term. Leading the latter is a pledge to hand struggling households £320 to help them through the winter fuel crisis, a £9 billion proposal funded by a one-off one per cent land-value tax on landlords. Among the former is a carbon tax, which party strategists are so keen to shout about they’ve promised a bottle of wine to anyone who gets it mentioned in the press.

Voters might be coming around. On the morning of the speech, YouGov put the Greens behind the Tories and Labour on 10 per cent – good enough for third, ahead of the Liberal Democrats. A couple of weeks earlier, another put the Green vote in the fabled ‘red wall’ at seven per cent – up from one per cent in 2017 and 2019. The party won 155 seats – 99 of them gains – in May’s local elections, and is now represented on 141 councils.

“That [poll] wasn’t a one-off,” Denyer says, bullishly, when we meet the day after their speech. Ramsay nods. “The climate and ecological emergency is right at the top of people’s concerns, and you do see in different countries that Green support tends to grow with that,” he says. “They know that we’re the real deal on this,” Denyer interjects. “Absolutely,” her co-leader nods again.

The UK is, by and large, very environmentally-conscious. Earlier this year, Brits listed climate change and pollution their second biggest concerns (behind the coronavirus pandemic). More than two-thirds of the public now want to see the country be a world leader on climate change – with agreement across all age groups, regions, genders and political fault-lines.

That may seem like good news for the Greens, but it isn’t that simple. Boris Johnson has just, in the words of a net-zero expert at the Tony Blair Institute, published “the most comprehensive, whole-economy net zero strategy in the world”. Labour last month pledged to spend £28 billion annually tackling the climate crisis, as Keir Starmer vowed to “bring forward a Green New Deal”.

When British politics as a whole has a green sheen, how do Denyer and Ramsay convince voters they need the Green Party in power?

“Over the course of decades, the Green Party has pushed other parties in the direction of accepting that net zero is needed,” Ramsay says. “The question is, are the policies that are in place enough to achieve that? And yes, there are some things in the net zero strategy that move in the right direction. But overall, it’s just woefully short of what’s needed – as is the Labour Party’s commitment.”

“It’s several orders of magnitudes insufficient,” Denyer adds. “It’s woefully, woefully short – in so many areas,” Ramsay agrees. “They’re looking at trade deals with New Zealand – we need to be looking at supporting our farmers to grow the food we need locally.”

While admitting that the heat pumps policy is “going in the right direction, but too slowly”, Denyer is unequivocal that “the Conservatives and Labour are enacting policies that are literally going in the wrong direction” – from supporting airport expansion to “building new dual carriageways instead of walking, cycling and public transport infrastructure”. Johnson, she adds, will “be wanting to swagger about and make the most” of his net zero strategy in Glasgow. “But where’s the substance and the delivery? We will be the party calling that out.”

Are the Greens fit for purpose?

The pair are noticeably more relaxed than they appeared on the conference stage, although Denyer – popping Strepsils to nurse her through a conference cold – has a habit of jumping in and taking over when Ramsay starts to meander. That is perhaps unsurprising for a leadership set-up which, as far as British politics goes, is unusual.

While Denyer and Ramsay were elected by the party’s membership – which hovers around 53,000 – they have little formal power to set policy, causing the pair’s predecessor Jonathan Bartley to warn recently that the Greens are not “ready to meet the opportunity that is there for it”. And, in a political ecosystem dominated by an over-mighty Westminster, it can be hard for anyone who isn’t an MP to get their voice heard.

Denyer insists the Greens are not “held back” by the grassroots nature of the party, but admits “elements of the party’s structure and governance” are “out of date”. She says they want to make the party “more flight of foot” – but that isn’t “code for having more powerful leaders. We’re powered by our members, and we’re very democratic compared to the other political parties. I think that’s a positive.”

In theory, that membership stands to gain from Starmer tacking rightwards. Among those who voted for Labour in 2019, just 78 per cent said they would do so again – with 11 per cent suggesting they would vote Green instead. With a policy platform that includes several notches on left-wingers’ bucket lists – from a wealth tax to a universal basic income – those lefties inspired by Jeremy Corbyn and disenchanted by his successor seem eminently winnable.

“We haven’t gone ‘oh there’s a gap, let’s move left’,” Denyer says. “We’ve always had those policies. If Keir wants the Labour Party to vacate that political space and send a load of voters our way, great – thanks. But that’s not us manoeuvring, that’s being consistent.”

‘Two sides of the same coin’

Just how laser-focussed on the climate crisis the party should be has been a hot topic of late. An article in the New Statesman recently claimed the Greens are “missing their moment”, with the writer suggesting its position “socially to Labour’s left” dilutes and distracts from its climate credentials.

Denyer and Ramsay’s election was triggered when Siân Berry stood down after the party appointed gender critical Shahrar Ali to its front bench. Ali subsequently ran for the leadership was trounced, falling behind not just Denyer and Ramsay but Amelia Womack, the Greens’ deputy leader, and Tamsin Omond – an activist who became the first trans and non-binary person to stand for the leadership of a major UK party. That race was described as exposing “stark internal divisions” within the Green Party.

Asked whether the Greens should be running as a single-issue, environmentalist party, Denyer is withering. “I’m running out of patience for that question, sorry.” With a sigh, she continues: “The Green Party has always had a really full set of policies and a really strong social policy. I wouldn’t have joined if that wasn’t the case.

“The way our policies have been presented in the media over the last couple of decades has been that we’re only about climate change and trees and recycling, but that’s never actually been the case.  It’s just that, until recently, we weren’t getting much press – so the stuff we were getting was clipped to the bits about the environment. Progressive economic and social policies are indivisible for me and for the Green Party. We see social and environmental justice as two sides of the same coin.”

Making that clear will be a priority at COP, she adds. “I’m going to be hammering carbon tax and climate justice and reparations as things we want to see on the table.”

As for the party’s “stark internal divisions”, Denyer suggests their election provides “a strong mandate for trans rights”, adding: “Adrian and I are quite clear that we are firmly in favour of trans rights – but we also recognise that we need a culture in our party and wider society about better understanding other people’s lived experience and their gender.”

Ramsay, after a brief pause, broadly agrees. “We want the party to be a place that’s welcoming and inclusive for everyone,” he says.

For all the positive noises, Denyer and Ramsay are well aware that, so long as MPs are elected under first-past-the-post, it will be tough to make inroads at Westminster. The places where Green parties are either in power – like Scotland – or on the cusp of power – like Germany – both use forms of proportional representation, and are probably unfair comparisons.

Nonetheless, Denyer is unequivocal that she will join Lucas as the party’s second MP in Bristol West, which has long been the party’s primary target seat. “We’ve nearly tripled the number of counsellors we have since 2019.

“When voters have Greens representing them at a local level, as an increasing number of people do, then they know what they’re getting themselves in for and it makes them more likely to vote Green nationally next time. With 24 counsellors in Bristol now – the same number as Labour – it gives people a really good idea of what they can expect from the Greens.”

Denyer and Ramsay ended their conference address with a claim that the Greens – and only the Greens – “have what it takes”: to enact “serious climate action”, “remake our country” and “make our politics compassionate”.

They certainly are not lacking in ambition. Whether that ambition is realised is another matter entirely.