Amelia Womack and Tamsin Omond want to be the next co-leaders of the Green Party. 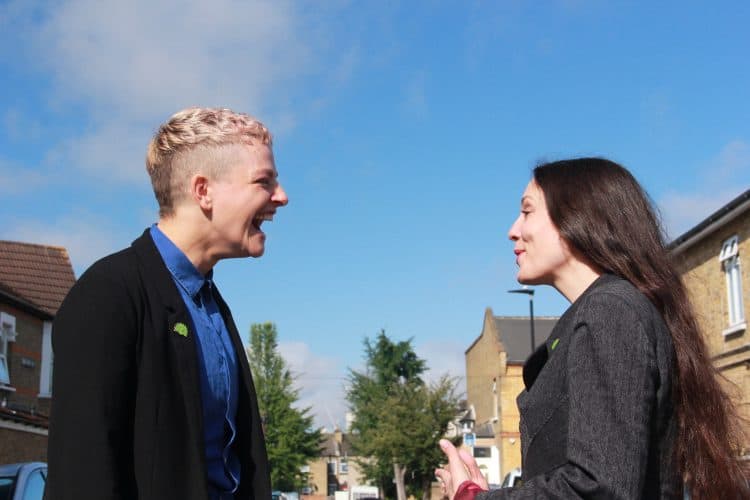 Tamsin Omond (L) and Amelia Womack (R) are standing for the co-leadership of the Green Party. Image: Rob DesRoches

The planet is on fire and Extinction Rebellion is in the streets. If there was ever a time for the Green Party, this is surely it.

Amelia Womack and Tamsin Omond agree. “We’ve got a window of opportunity to address the climate and ecological emergency,” says Womack, the Greens’ deputy leader since 2014. “It’s really important that a Green voice is heard at this moment.”

Theirs, preferably. Womack and Omond, both 36, are standing to be the Greens’ next co-leaders – and they’re bullish about their chances. “These times speak uniquely to the message and offering of the Green Party,” Omond says. “That’s where we see our leadership as particularly inspiring.”

Although the environmentalist credentials of both are impeccable, the duo’s backstories are quite distinct. Womack has been a Green Party member for more than two decades and has served as its deputy leader for seven.

Omond, on the other hand, is a co-founder of Extinction Rebellion, with an activism rap sheet taking in everything from fighting the expansion of Heathrow Airport to dumping manure on Jeremy Clarkson’s front lawn.

But over cups of tea in Omond’s east London flat (oat milk, of course), the pair insist their “unique, complementary union” – which has already won plaudits from George Monbiot and, believe it or not, Cara Delevigne – presents an “almost magical opportunity” to drive the Greens forward.

“Amelia has been building the roots of the Green Party for years,” says Omond, who speaks with the earnest, ear-to-ear enthusiasm of a drama student delivering their first soliloquy. “Whereas I’ve been raising public awareness around the climate emergency through organising movements and creating media narratives; I want to bring some of the broader movement-based organising into the leadership of the Green Party.”

“We’ve been on the outside shouting in for a long time,” Womack, evidently eager to tap into Omond’s organising acumen, says. “Now we’re on the inside – in councils, in Parliament – putting policies in place which will help our generation address inequalities and the climate emergency. But how you win seats is by talking to people, knocking on doors and making sure the Green voice is being heard.”

The Greens should stand to benefit from Labour’s tacking to the centre – and Omond and Womack clearly have lefties disgruntled by Sir Keir Starmer in their sights.

“We’ve got a Labour Party failing to speak out on too many issues,” Womack says. “The Greens have to be that bold voice standing up for those nurses on the frontline of the pandemic and putting policies like a Universal Basic Income in place to ensure we are addressing the biggest issues of our time.”

She believes the Greens are well-placed to make those arguments. “The strength of the Green Party is that our policies don’t change with our leaders. We are clear and consistent election after election. Some people would call our policies radical but at this point in time, quite frankly, they’re just rational.”

Omond, who has been nodding enthusiastically while Womack talks, jumps in. “There aren’t that many people who are doing really well from the current system as it is, are there? That’s why we’re seeing so many people getting in touch and wanting to be part of our campaign – they see in us something that hasn’t been represented to them in British politics before.”

In more ways than one. Omond is the first trans and non-binary person to stand for the leadership of a major UK party. Were they to win, it would represent a watershed moment for inclusion in a political culture often defined by its absence.

Nonetheless, they’re wary about their experience being extrapolated to stand for the entire trans community. “I shy away from talking about trying to represent any gender identity – it’s this thing where if you’re not a cis male, you suddenly have to represent every single person.”

But they admit that “it’s really important for the nation” that trans inclusion has a visible place in national politics. “My gender identity doesn’t exist in law in the UK – and the Conservatives have no intention of allowing it to exist. It matters that I grew up unable to understand my gender expression because I just didn’t see it anywhere.”

That Britain seems to be lagging behind other nations on trans inclusivity clearly weighs on Omond. “My coming out as trans was enabled in many ways by not living in the UK,” they say. “It was living in Berlin – this great queer city – that introduced me to ideas and people whose experiences chimed with mine, and I was given a language about my identity I just didn’t have here.

“I used to have this thing around trans identities being binary trans identities – and I didn’t know about non-binary identities. Then I was in this extraordinary situation of coming home to my body again, just because I had the language to describe my experience and how it’s felt to be in my body for all of this these years.”

Who Omond is and what they represent is leant added edge by the turbulent background to this election. Siân Berry, the Greens’ candidate for mayor of London, quit as co-leader last month – a decision understood to be based on the party’s appointment of Shahrar Ali as spokesperson for policing and domestic safety.

Ali – who is running against Womack and Omond – last year said women should be defined as “an adult human female” who is “genetically typified by two XX chromosomes”, and has called for “a culture of open debate, where the taking of offence is not used as a means to prevent those who do wish to debate from doing so”.

But Womack rejects claims that the Greens are embroiled in a transphobia row.

“The reality is we are a trans-inclusive party that has the best policies on trans rights. But within the party, there are a few loud voices that aren’t representing those values. So it’s not a row, it’s a moment where I think we are the solution to the issue Siân highlighted.”

“Or at least part of the solution,” Omond adds.

“Yes,” Womack agrees. “We’ve moved to that phrase: no conversation about us without us. And with a trans leader, we can really embed that. Siân threw down the gauntlet on this. She posed a question, and we’re here to answer it. It’s the perfect moment to be tackling this head-on.”

“Progress is inevitable,” Omond says. “We’re coming out, we’re taking up more space, and there’s a reaction – but it does feel like it’s going to be for a limited time. It’s a matter of time before the binaries are exploded, which will be great for men, women, trans people, everyone.”

The ground has arguably never been more fertile for environmental politics. It’s less than a month since the UN’s Intergovernmental Panel on Climate Change (IPCC) issued a “code red” warning for humanity, and a summer of flooding and wildfires has made the climate emergency feel more visceral than ever.

Can the Greens seize this moment? Womack and Omond certainly think so. They talk confidently of winning parliamentary seats – Omond believes a second Green MP joining Caroline Lucas, probably in Bristol West, is assured – with the ultimate aim of ten MPs in Westminster in ten years.

You sense that both of them are desperate for the chance to make that happen. “The Green Party is set to achieve more,” Omond says. “The foundations have been built, growth from here is a given. It’s about how we leverage this moment.”

Should they manage it, they believe Britain could suddenly find itself a step or two closer to “a glorious Green future”.