The Green candidate for mayor tells TLE why Londoners should pick her. 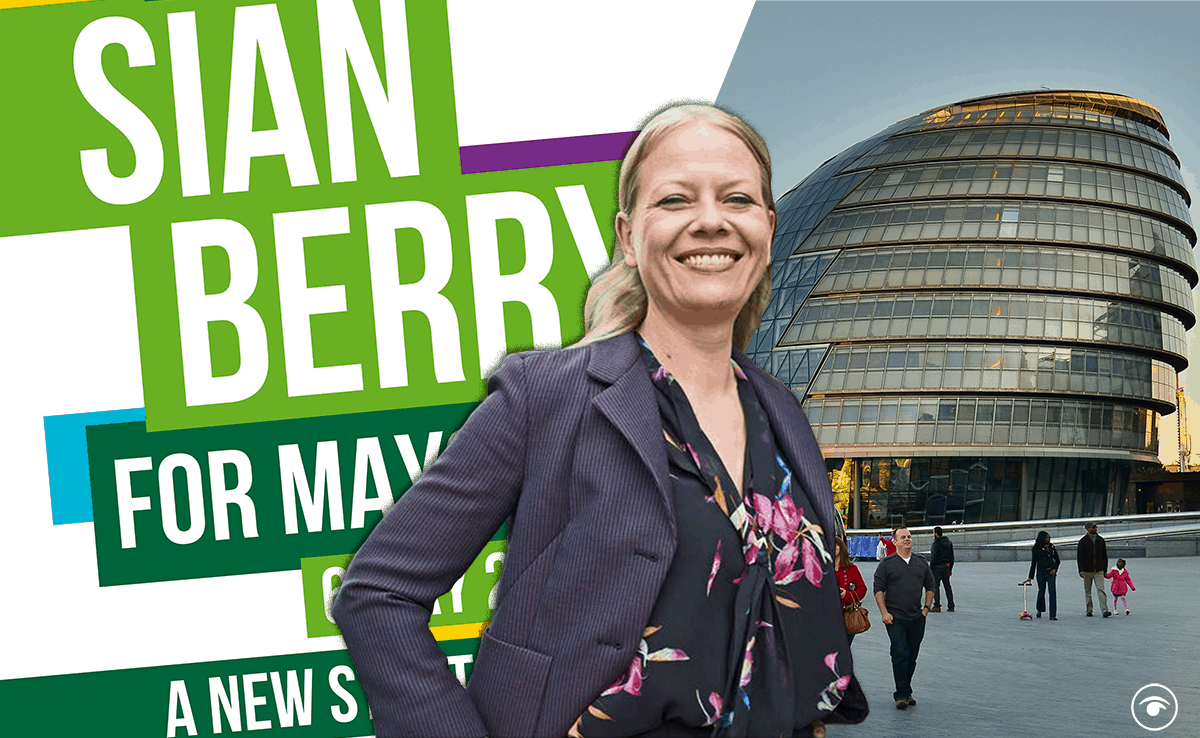 Berrylands is probably best-known for the vast sewage treatment plant that preoccupies visitors’ eyes – and noses – the second you step off the train. An unglamorous neighbour of Hampton Court Palace and forgotten cousin of Kingston, it’s not the sort of place which springs immediately to mind when one thinks of the race to win the mayoralty of London.

But it takes all sorts to make a city – and Berrylands is an unpretentious spot for a campaign stop by an unpretentious candidate: Sian Berry, standing in her third mayoral election for the Greens, a party which seems to have cemented its position as the city’s second-favourite.

In an election where every candidate – even the bloke who drinks his own piss – seems to have a gargantuan battle bus, the 46-year-old Berry is an outlier. She pitched up to Berrylands on the train and immediately set about an extremely on-brand visit to Save The World Club, a community repair and recycle centre filled to the gills with bric-a-brac, from discarded mannequins to children’s books and old teapots.

The Greens won more second-preference votes than any other party in 2016, and they seem poised to repeat the feat this year. Sadiq Khan – who, barring a miracle, will be reelected next week – has said that Berry will be his second preference, urging Labour voters to follow his lead. Many probably will – much to Berry’s frustration.

“There’s a genuine danger that I’m going to get more than 50 per cent of second preferences in this election,” she says. “That would be a real injustice to the programme that we’ve got and the ideas that we have. We should have more people putting us first and saving their second preferences for second best.”

‘The mayor is too timid’

By most metrics, London is a very environmentally-friendly city. A study last year ranked it as the most eco-friendly city to work in on the planet, while an overwhelming number of Londoners are concerned about climate change; more than half feel it has impacted their day-to-day life in the capital.

That poses a conundrum for the Greens. In a city packed with environmentalists, with a receptive Labour mayoralty, how do you convince people that they really need a Green in City Hall?

For Berry, the challenge is proving that Khan can go further. “We’ve seen some progress,” she admits. “But there are gaps, and Sadiq Khan has only taken half-measures in some places.” Berry points to the Ultra Low Emission Zone, which Khan chose not to expand to incorporate the whole of London.

“That’s a lot of what we’ve seen from this mayor – half-measures, the middle option, not wanting to frighten too many people, not wanting bad headlines, just doing the bare minimum,” she says. “We need to go further. We should be the greenest city in the world, but the mayor is cautious and timid about taking any kind of political risk.”

For most, the Greens will remain a single-issue party. It certainly felt that way in Berrylands; one wonders how many recycling plants Berry has been shown round by men in high-vis jackets and sandals.

It was also an afternoon which highlighted the difficulties the Greens face in dispelling the notion that they belong to the political fringe. One volunteer at the centre took me aside to voice his concern about “this Great Reset thing” – a conspiracy which theorises that world leaders orchestrated the pandemic to take control of the economy – and inform me that face-masks are “all about control”. Another proudly told me that he had last week been interviewed by Russia Today, while his colleague wondered “whatever happened to Sputnik”, unaware it has recently been drummed out of the UK after being designated a Kremlin “disinformation weapon” by Nato.

Regardless, Berry’s is hardly a single-issue manifesto. It’s packed with policies that would fundamentally reshape the capital, from closing London City Airport to cracking down on puppy selling. The most eye-catching is a “zero murders” target – which sounds ambitious at best, and utopian at worst.

“It’s all about a change of perspective and where you put resources,” she explains. “If you’re thinking about trying to achieve zero murders, you’re not going to simply do more enforcement or do more stop and search – you will want to prevent them at an earlier stage.”

In that sense, the “zero murders” pledge feels more about instilling a change of perspective in law enforcement than enacting any concrete policy to drastically reduce crime. All of which is well and good, but detail on how a Green administration would actually go about it is sparse.

“When you have a domestic homicide, there’s always a review that looks back at what could have prevented this – and it looks back mainly at public services like social work or when the police were contacted in the past,” she says. “I think we need to do that for every murder, and look further back – what life chances were there for the perpetrator? What happened to them in school?”

Berry cites “things like youth centres” as being important in “giving young people different options” and “raising their expectations of their own lives”. There is little doubt that both major parties are mired in the same old tough-on-crime law-and-order rhetoric as ever, but Berry might consider throwing some meat on those bones.

More intriguing for Londoners returning blinking onto their high streets in the coming weeks is Berry’s proposal for a ‘working rent’ – essentially, caps on what commercial landlords can charge small business.

In the early months of the pandemic, some speculated excitedly that the devastation wrought by Covid-19 on central London eventually lay the groundwork for its rejuvenation. Lower footfall in zone one, the argument went, would reverse its Prêtification; the chains would jump ship, vacating space and lowering rents so a host of independent businesses could move in.

That now feels a little naïve. Some chains and department stores have suffered – but so has everyone else, too. Bigger companies are still in a better position to take up central London real estate than most.

“Setting up a working rent means new businesses can start up and get those premises in the knowledge that their rent will stay the same, so they can plan ahead,” Berry says. She’s adamant that the plan can benefit landlords too. “There’s a lot of landlords at the moment concerned that there aren’t enough people about to pay them rent. If you can secure a lower level of rent for a longer time, that’s a good deal.”

‘I don’t fit the mayoral stereotype’

One issue for parties with a raison d’être as clearly-defined as the Greens is that any attempt to widen their platform risks diluting the original message. But that’s as much a problem with a political culture which still, to a large degree, pigeon-holes Berry and friends as hippy-dippy eco-warriors – ‘bunny huggers’, in the prime minister’s words – as it is with the Greens themselves.

It hasn’t been lost on Berry that, despite the Greens seemingly stand to benefit nationally from Sir Keir Starmer’s Labour tacking to the centre, you’re more likely to stumble across press coverage of Laurence Fox or the aforementioned piss drinker than one of the UK’s major political parties.

“Oh don’t talk to me about that,” she says with a wry smile. “There are more people bunging their £20,000 into the ring – and I’d never tell people not to stand up for their points of view in elections – but it does frustrate me.

“A Green woman doesn’t fit the mould of a mayor, and so my good ideas – the good ideas that the Greens have put together over time, Londoners’ ideas… I’m not seen as a default acceptable spokesperson for those ideas as a mayor because I don’t fit that stereotype.”

We’re getting closer to that stage, Berry believes – though maybe not in London. In Germany, the Greens’ 40-year-old leader Annalena Baerbock has a legitimate chance of succeeding Angela Merkel later this year. “I think the Greens have changed what a strong leader, a strong woman is – but it does frustrate me when any old random, standard bloke puts their name forward and thinks ‘I can do that’ when I’ve put in the years,” Berry says emphatically.

“If you look at my policies, what you’ll see is not only have I got good ideas – but I know how I’m going to do them. You drill into any of these come-lately candidates and they don’t have that depth of knowledge of how to achieve things. And I do. So grrr.”

Berry is keen to remind voters that she doesn’t just go to ground for four years and then resurface come election time. She’s been in the London Assembly, where she’s adamant that she’s “pushed [Khan] to the left” on stuff like rent controls – a nod to the lefties disenchanted by Starmer’s shift rightwards that the Greens are hoping to woo.

Winning over enough Labour voters to make any sort of dent in this race is a Herculean task, though – and Berry is clearly aware of that , despite insisting that she intends to “do tremendously well in this election.”

“I think there’s a genuine chance of pushing Shaun Bailey, the Tory candidate, into third place,” she says. “And that would be the news story of this election – even from Sadiq Khan’s point of view.”

Related: Deliveroo: Are basic rights a fair price to pay for the ultimate flexibility?