The Extinction Rebellion co-founder on where the group goes next - and why civil war could be on the horizon. 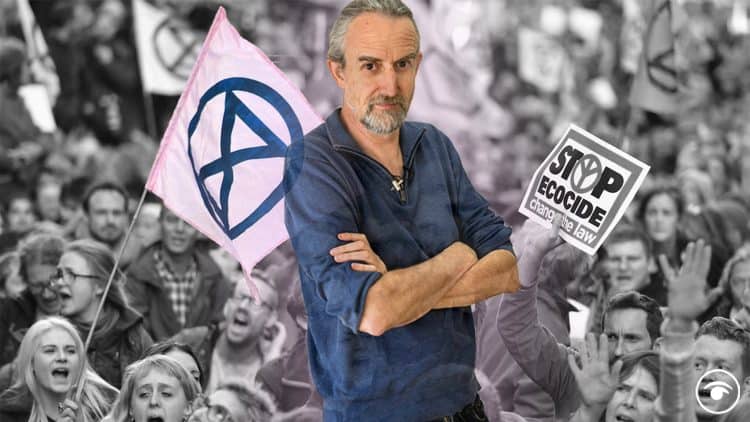 Roger Hallam does not want to be misquoted.

“I talked to a budding young journalist like you about a year ago and we had this nice chat about the morality of not acting on climate change. And I said, ‘if this isn’t sorted, there’s going to be political violence and people will get shot’. Three months later it appears in the paper that I’ve suggested it’s a good idea to shoot people. So don’t do that!”

Hallam, the scraggily-bearded, pony-tailed co-founder of Extinction Rebellion, shakes his head. “Making a sociological prediction is not the same as wanting it to happen.”

We are meeting at a café on the corner of a busy road in south London. Extinction Rebellion’s latest wave of protests – the ‘Impossible Rebellion’ – has just finished. Over the course of a fortnight, the group which Hallam, 55, helped create glued themselves to a branch of McDonald’s, erected a giant pink table in Oxford Circus and splattered banks in paint. More than 300 ‘rebels’, as they fondly call themselves, were arrested in the first week.

How does he think it went? “I think there’s an eerie sort of phoniness about the press reaction to it.” Which is? “That [activists] are all terrible people, blah blah blah. Whereas the reality of what Extinction Rebellion (XR) has been saying is: if you don’t get on with the job, we’re facing the end of civilisation. That’s Oxbridge speak for the biggest shitshow in the history of humanity.”

Hallam’s relationship to XR is a little opaque. Its UK chapter last year stated that he “no longer has any formal role” with the organisation after activists linked to a Hallam-connected offshoot of XR tossed pink paint over the London offices of Greenpeace, Friends of the Earth, Amnesty International and Christian Aid. In letters plastered to each building, they claimed the charities had done “fuck all that was meaningful”.

“XR is a movement, not a hard membership organisation,” Hallam says. “I don’t have any formal role in it, but I’m still part of the movement.” Later, he hurriedly issues a disclaimer. “I’m talking in a personal capacity – I always forget to say that. Put that in the front of the article, because I’ll get in trouble with the top.” You said there was no top, I suggest. “There isn’t,” he replies. “But…”

It’s an interesting time for XR. Britain broadly agrees that climate change is here, it’s bad and it needs to be fixed. More than half of Londoners – whose lives XR spent last month “disrupting” – believe the climate emergency is already impacting their daily lives. Cop26, looming on the horizon, has thrust environmentalism to the top of the political agenda. When there is something approaching consensus, what’s the point of XR? And does it need to spell out, in detail, exactly what it wants?

Hallam is adamant: no. “I think there’s something slightly cowardly about people saying they agree we’re facing the biggest existential crisis in the history of humanity, and not going into rebellion against the government. What that tells me is people are still in chronic denial, or they’re cowards.

“The issue isn’t what XR is doing,” he continues. “It’s what the people of London are doing about their responsibilities to the democratic project, to their children and to the future of the world. The real question is: why the fuck isn’t the government acting?”

XR, then, isn’t about embarrassing the government into building a few more wind turbines. It’s a response to, as Hallam puts it, “a crisis of the whole system”. The solution? Overturn it. “If there’s a crisis in the whole system, then everyone in that system that has their head screwed on has to change that system,” he explains.

Hallam’s revolutionary zeal is hardly shared by everyone who took to the streets with him in August. Most XR rebels interviewed during the two-week ‘rebellion’ seemed concerned, above all else, that the government wasn’t moving fast enough. One friend told me of someone he knew who took a week’s holiday from a civil service job to join the protests. It doesn’t exactly scream down with the establishment.

And XR’s smash-the-system approach doesn’t seem to resonate much with the public either. The group’s first ‘wave’ of disruption – those two weeks in November 2018, when bridges were blocked and a 15-year-old Greta Thunberg addressed thousands-strong crowds – was popular. But its second, when tweed-jacketed protestors prevented largely working-class commuters from getting on the Tube at Canning Town, was backed by just 13 per cent of Brits.

Hallam isn’t bothered. He points to Martin Luther King, Nelson Mandela and Gandhi – “hated like hell, then loved again when [the public] realises they were right all along”. XR is “replicating the same process,” he insists. “XR is not going to stop because 70 per cent of the British public don’t like it. The British public needs to get its shit organised and realise it has responsibilities to its children.”

On the consequences of the British public failing to “get its shit organised”, Hallam is ominously clear. “So,” he says, exhaling. “Here’s how political history works.” The first scenario involves the establishment being “intelligent enough to make the rapid political and economic changes that are necessary”, by which he means an urgent, wholesale decarbonisation of the economy.

The second involves the “elites” being “so stupid” that they refuse to “confront the corporate fossil fuel class”. In that instance, Hallam explains, the establishment “facilitates the collapse of capitalism” and destroys itself “because of hubris”. What that looks like, he says, is 20,000 people on the streets of London for four or five weeks within the next three or four years – “and the political class collapses under the weight of its own contradictions”.

At the third, Hallam hesitates. “You can tell me, because I don’t want to say.” Eventually, he says with solemnity: “Civil war and endless social collapse.” Within twenty years, he suggests, the “scientific consensus” is that the global average temperature will have exceeded 2°C of its pre-industrial level. “Two degrees is global social collapse. Anyone who doesn’t understand that has zero analytical intelligence.”

What happens then? Before telling me, Hallam is keen to stress that – “at the moment” – XR is “a bunch of profoundly lovely people. They’re the most beautiful people in this country. They are warm-hearted, caring, public-spirited, retired doctors and nurses. You couldn’t wish for a nicer group of people.” But, he says, “in ten years time you’re gonna have body parts on the street.”

He’s keen to distance XR – and, indeed, himself – from the coming carnage. “I’m not gonna want it,” Hallam says. “But go and read some history. Once people get hungry, that’s it. Every revolution is propelled by broadly the same phenomenon – people who haven’t got any food in their stomachs.”

It’s the press, not politicians, who he believes will be the first to go. “The first people to die are going to be journalists,” Hallam says. A bit shocked, I ask why.

“You haven’t thought it through, have you? The group with the most to lose from the climate crisis is journalists. They’re the people who die the most because they’re out there getting beaten up and shot,” he says, citing last summer’s Black Lives Matter protests and the Taliban’s takeover of Afghanistan.

“You haven’t thought it through,” he repeats. “The press is committing suicide by not exposing this absolute crisis.

“In three to four years, everything is going to be fucked. Locked in. You can’t stop the Arctic from melting. The ball has rolled down the hill. And you’re going to spend the next ten years reporting on body parts in the streets of London.

The only thing that can save us, Hallam believes, is mass civil resistance – or “prophetic leadership”. He says repeatedly that I should be speaking to Tory MPs about the climate emergency instead of him – asking them “what would Churchill do?”, “don’t you give a fuck about this country anymore?” But, he laments: “There’s no Churchill on the back-benches.”

In his absence, XR will roll on – beyond the ‘Impossible Rebellion’ and into its fifth, sixth, seventh waves. At the moment, Hallam says, the intensity of the group’s disruption is “about four out of ten”. What’s ten? “10,000 people in London for three weeks, with 8,000 arrests and 1,000 people in prison. It is going to happen – for the sake of everyone.”

These sort of conversations often end with a note of optimism, or a wistful reflection that humanity can overcome any challenge. But not this one. Finishing his orange juice and glancing at his watch – his next engagement is a meeting of XR splinter group Insulate Britain which, this week, blockaded the M25 three times – Hallam sums up.