If a deceiver deceives a deceiver, does one of them eventually end up telling the truth? 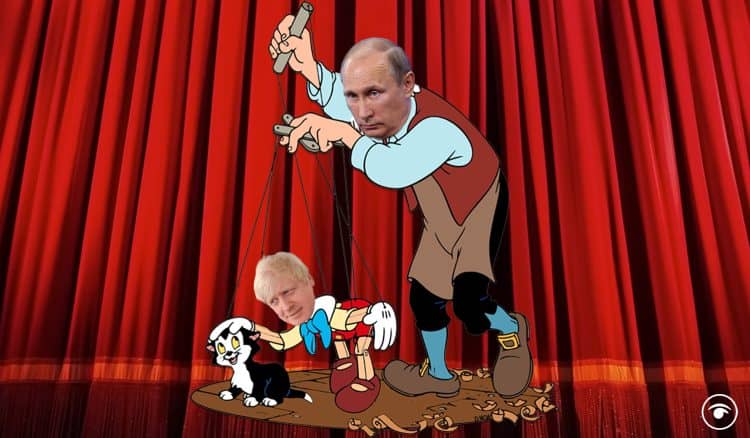 There are times when the lies and deceit are so obvious that you have to double-check that they were actually uttered out loud.

Today, it started with the prime minister blaming Labour for the energy crisis. It’s been 12 years since Labour were in power, their political battery drained away in the noughties.

So what would Johnson do about the increase in household bills? Sir Keir Starmer demanded a windfall tax on energy firms.

The PM let out the air on that, telling the Labour leader that companies would simply respond by upping their prices further. The reality of predatory corporate capitalism laid bare.

That said, he and Stamrer both seemed to be welcoming nuclear power with open arms, which is bad timing as it was reported that Chernobyl could be 48 hours away from leaking radiation during today’s PMQs.

So what of the government’s response to the humanitarian crisis in Ukraine?

Johnson was asked to waive visa requirements and let Ukrainians in. He rubbished the idea (that all EU countries have adopted) and told the House: “It would not be right Mr. Speaker to expose this country to unnecessary security risks.” This is from a PM who dismissed warnings from MI5 not to hand a peerage to the son of a Russian oligarch and ex-spy.

But what does the Russian state make of the UK’s reaction to the invasion? Well, the PM said that the Russian state has singled out Britain for being the lead nation on global sanctions against them. Because as we all know if the Kremlin says something, it must be true…

And this is where we get stuck in a misinformation loop, is the PM just making that up? It was only a day or so ago the Centre for Financial Crime & Security studies at the Royal United Services Institute said the EU and US ‘have moved faster in individuals’ when it comes to sanctions. If a deceiver deceives a deceiver, does one of them eventually end up telling the truth?

Philosophical arguments aside the PM then, with a straight face, told the house that no Ukrainian has been turned away from the UK border, but that simply isn’t true. Ronnie Cowan MP even used the last question to tell the PM  that a couple in their 80s, whose daughter lives in the UK, were told to come back on 22nd March to a Visa site in Hungary. So who do you think is lying in this case…

It was noticeable that Priti Patel was nowhere to be seen and failed to turn up for an urgent question in the Commons yesterday.

The new role of refugee Minister for Ukrainians has been handed to the levelling-up department. You wonder if he is going to send these desperate people on fruit picking duties.

As much as it pains me to say I am going to cut the underfire Home Secretary a bit (ok a tiny morsel) of slack.

She has spent all her time bringing in the Nationality and Borders bill, basically an attempt to stop as many people coming here as we can. Now her department has been told to welcome refugees with open arms, the wheels of civil service bureaucracy can’t do a complete 180 in a matter of days.

However, it still doesn’t explain why there is no visa centre in Calais (or Lille for that matter)? You fear that this is a political decision, not down to human error.

Could it be that they are concerned about non-Ukrainians claiming they are from that country? Or will it at least encourage more people to jump into dinghies as the UK now appears to be welcoming refugees?

‘Is my war zone not as important as that one’,  they might be thinking as they cast their rickety craft into the menacing waves of the Channel.