"Our car is our home now. We're hoping the visa will be approved." 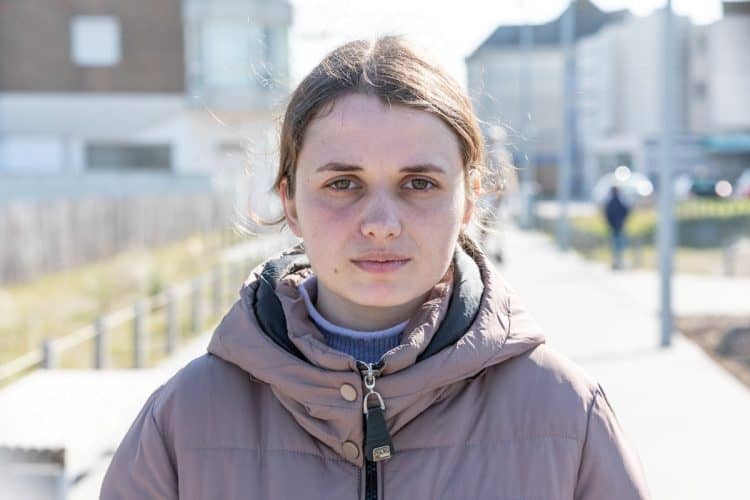 A Ukrainian woman stranded in Calais with mum and brother has warned that her family may return to their war-torn home if their UK visa is rejected.

Tetiana Osadchuk, 26, is facing a nerve-wracking five-day wait to discover the fate of her application to join dad Vladmir, 54, who works in construction in Reading.

But she fears that authorities will block her, mum Lecia, 48, and brother Victor, 16, as her dad has only lived in Britain for two years and has a pre-settled visa status.

Tetiana warned that her family may be forced to return to their hometown of Chernivtsi in western Ukraine, near the Romanian border.

Tetiana, a medicine student, said: “My mum doesn’t want to go anywhere else. Her only foreign language is English.

“She will go back to Ukraine if she can’t get in. At least there we can speak Russian and Ukrainian.”

Speaking on the Calais seafront near a youth hostel where around 130 Ukrainian refugees are staying free of charge, she called for the UK to streamline its controversial visa process.

Tetiana, whose grandmother and extended family are still in Ukraine, said: “It all takes so long and still we don’t understand if we can cross into the UK.

“We are helping lots of people in the hostel with their forms because they can’t understand English and the forms aren’t translated.

“The UK government needs to simplify the process so that others can apply without problems.”

Tetiana, who arrived in Calais on Saturday, visited the visa application centre in Paris yesterday (Tues) and was told to wait five days for a decision.

She said that authorities in Romania, which she initially crossed into from Ukraine, told her that visas would not be an issue and encouraged her to drive directly to Britain’s border in Calais.

Outside the hostel, another young family also faced a nervous wait as they loaded three pet guinea pigs into their estate-style Ford ahead of a 190-mile drive to the visa application centre in Paris to give fingerprints for biometric tests.

The beloved rodents – two tanned and one white – have been transported on a six-day car journey from Kyiv with owner Anna Bolotina, 17, her mum Galina, 40 and dad Andrey, 47.

Anna, a schoolgirl who has never visited England, said the family are hoping for permission to cross into the UK to join her grandma, who has lived in Worcester for ten years.

She said: “We’re nervous but at least we don’t have Russian planes in the sky.

“Our car is our home now. We’re hoping the visa will be approved.”

Anna said the family would stay in France if their visa application was rejected.

They spoke on a bright and crisp day in Calais where locals appear to have continued their lives around the hostel that has become a makeshift humanitarian shelter.

One resident living opposite the hostel joked: “We’re used to this situation here in Calais.”

Refugee charity Care4Calais, which already provides aid for hundreds of migrants living in tents around the French city, said that it is also helping some Ukrainian refugees.