Never in the field of human conflict has someone been so proud of doing so little. 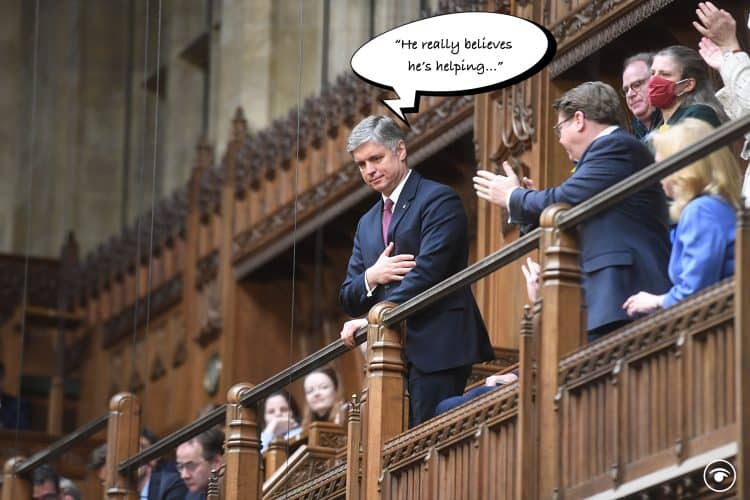 It started with a standing ovation for the Ukrainian ambassador, Vadym Prystaiko, watching on from the public gallery. It was against Parliamentary protocol, but that was ignored, quite rightly.

But what support can these MPs give Ukraine, or indeed want to, he might have thought as he looked down at the Commons’ representatives.

The prime minister clapped for the NHS then went inside his house to party, after all (OK, let’s wait for the Sue Gray report…)

There is a strange mix of no-fly zone jingoism and also Tories like Sir Edward Leigh who said they have done enough for eastern European refugees lately.

Surely you can’t have both, allowing World War III to break out over their land but not let the few survivors in as they flee.

Or perhaps the ambassador looked over at Kevin Foster MP who offered Ukrainian refugees to pick fruit on British farms.

Don’t get me wrong there are many Tory MPs horrified at the conflict, but the problems go all the way to the top, not just some nutty Tory backbenchers spouting off.

The PM was asked numerous times to waive all visa requirements for those fleeing the conflict (as the EU has) but he refused. Beware, he said ‘theatre of war’ three times today, so expect to hear that a lot more from his gob.

So the visa thing hasn’t happened, but what about chasing the money of the oligarchs? Well, the PM dodged questions on Roman Abramovich, who he claimed, wrongly, had been sanctioned last week.

He ignored Labour MP Bill Esterson when he asked the prime minister if the Conservative party will take its £2 million of Russia-linked donations and hand the money over to Ukrainian humanitarian causes.

Then he looked visibly annoyed when Chris Bryant listed a few Russians who have not been sanctioned.

It turns out that the number of rich Russian individuals being chased by the EU is larger than in the UK. We also seem to have given them weeks before anything will hit them. Plenty of time to shift their assets somewhere else, possibly to a British-owned tax haven?

But we have done a lot in Britain to show our disdain for Vladimir Putin. Councils have stopped getting energy from Russian sources, Everton kicked out their Soviet investor, even BP acted, the list goes on. The outpouring of public support has also been deafening.

However, the government remains tone-deaf, as with the pandemic, they have been slow and cumbersome. So again businesses, councils and the public have made a stand off their own backs.

So why can’t we sanction these apparatchiks now, the PM was asked by Starmer? Johnson told the House that it can’t happen overnight. I don’t know about you but how many times have you gone over your overdraft, been refused the money, and got hit with a charge for the pleasure of it?

You could argue that this is really naive and too simplistic, or maybe it is just common sense. Cut off and follow the money, as the Meerkat would have said (if the adverts hadn’t been pulled from news bulletins about the war)… simples.

The Labour leader also wanted to know why the Economic Crime Bill, which is to be voted on next week and will likely pass, gives an 18 month grace period before shell companies of luxury London properties have to reveal who they are really owned by.

Is the problem that if the government lifts the lid on Russian oligarchs it will also uncover all the other dodgy money and true owners of large swathes of our capital city? You wonder how many MPs, with fingers in the till, on the benches were squirming in their seats at the idea of this.

Expect a lot of upscale properties appearing on Zoopla in the next year or so, only problem is the only people who can afford them are other crooks with even dodgier money.

Maybe the Lviv mayor is right and we should put up Ukraine refugees in Oligarchs’ London mansions.

We have known about the dirty money washing through London for years so hasn’t it been dealt with before? This has been years in the making, it is like trying to use a cricket bat to divert a comet now.

Perhaps it’s because a cottage industry of bankers, lawyers, PR teams, accountants and most importantly direct access to the highest echelons of Government, that welcomed the huge sums of dodgy money, have enabled them. This point was mentioned by a number of MPs on all sides of the house.

In terms of the build-up to the Russian onslaught, the PM was keen to bang on that we knew about the attack first and ‘we did SWIFT and Aeroflot.’ Beware it is the new ‘Vaccines and He Got Brexit Done’. Never in the field of human conflict has someone been so proud of doing so little.

So why if we were sure Putin was going to carry out these monstrous acts did they not have a sanction list or a refugee plan ready?

Could it have been that the government was in stasis over partygate and had ground to a halt as the Russian tanks began to grind into action?

As he looked down at our elected officials the Ukrainian ambassador could be forgiven for thinking…. ‘with friends like these who needs enemies?’