Labour leader Sir Keir Starmer has now called on the pair to resign. 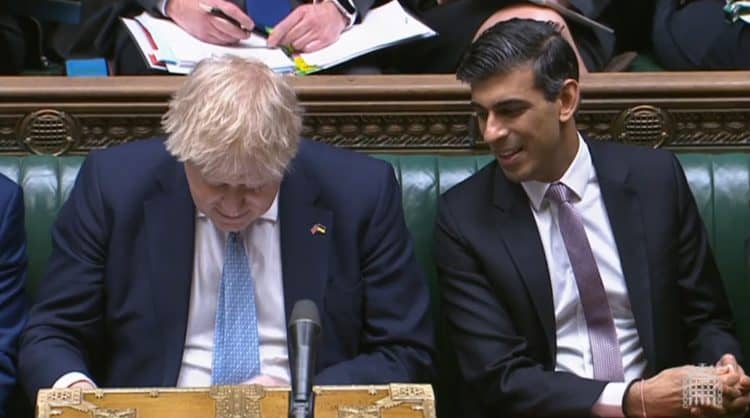 Boris Johnson is to be fined for breaking the law by attending an illegal event when lockdown restrictions were in place.

The prime minister and chancellor Rishi Sunak are among a tranche of 30 more fixed penalty notices dished out by Scotland Yard today.

A No10 spokeswoman said: “The Prime Minister and Chancellor of the Exchequer have today received notification that the Metropolitan police intend to issue them with fixed penalty notices. We have no further details, but we will update you again when we do.”

The PM has yet to publicly acknowledge that the fines being issued by the police are evidence of law-breaking by senior figures in his Government and Whitehall.

Labour leader Sir Keir Starmer said the announcement of at least 30 more fines relating to the Partygate saga has “blown the prime minister’s defence out of the water”.

Speaking during a campaign visit in Glasgow today, Sir Keir said: “He claimed to the country that all the rules were being obeyed in Downing Street – where he lives and where he works – that there had been no parties.

Now Labour’s Sir Keir Starmer has told the pair: ‘Boris Johnson and Rishi Sunak have broken the law and repeatedly lied to the British public.

‘They must both resign.

‘The Conservatives are totally unfit to govern. Britain deserves better.’