The BBC was blocked from Sunak's event in Darlington - but his pricey PR photographer wasn't. 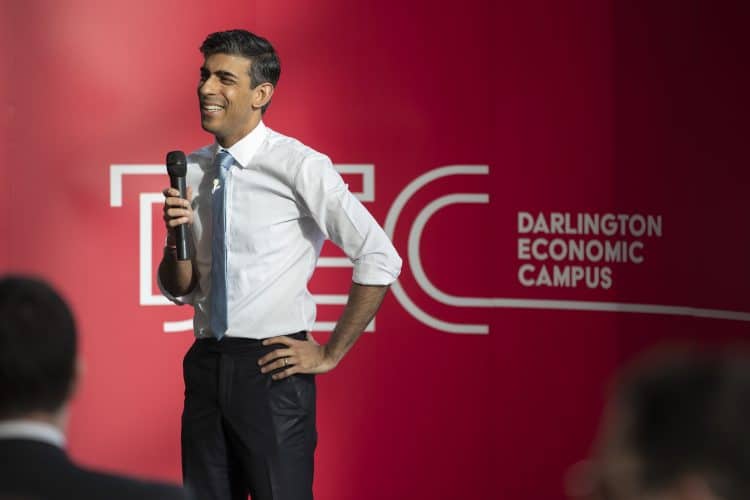 Rishi Sunak has been accused of trying to dodge scrutiny over his family’s tax affairs after broadcast media were blocked from an event in the North on Monday.

The embattled chancellor faced claims he is hiding from the cameras after appearing at Darlington College on Monday, following days of criticism over the tax affairs of his non-dom billionaire wife Akshata Murty.

It has emerged that, while advisers refused access to the BBC and other broadcasters, Sunak was accompanied by his £60,000-a-year taxpayer-funded photographer.

The chancellor has denied being out of touch with the British public, even as Keir Starmer accused him of “just not getting” the extent of families’ cost-of-living struggles.

Reporters who were allowed to the Darlington event were reportedly told not to ask about the non-dom saga – and Sunak refused to be drawn on either his wife’s tax status or claims he held a US green card while serving as chancellor.

Another source who attended the event said Sunak’s advisers tried to shield him from tough questions when he appeared on stage with Tory mayor for Tees Valley Ben Houchen.

They told the paper: “Usually you can’t move for cameras when the mayor has ministers in town but this time the news media seemed about as welcome as a letter from HMRC on Rishi Sunak’s doormat.

“They clearly wanted maximum control as the chancellor even chaired the panel. During the Q&A, the Treasury events team with microphones didn’t even wait for the chancellor to point out who would ask the next question as if they had been vetted in advance.”

After Starmer questioned whether Sunak “can relate to the very real struggles that people have and the cost of living crisis”, the chancellor insisted he was aware of the pain experienced by poorer families.

“I want to make sure that we can do, and I can do, everything we can to get through what are some challenging months ahead.

“People are looking at what is happening around them and seeing prices go up and of course people are worried by that.

“I want them to be reassured that me and the government are on their side and doing what we can to ease the burdens that we are facing.”