“The Prime Minister lives only 50 metres away; is he blind or deaf? Come here and face me,"said protestor Dhan Gurung. 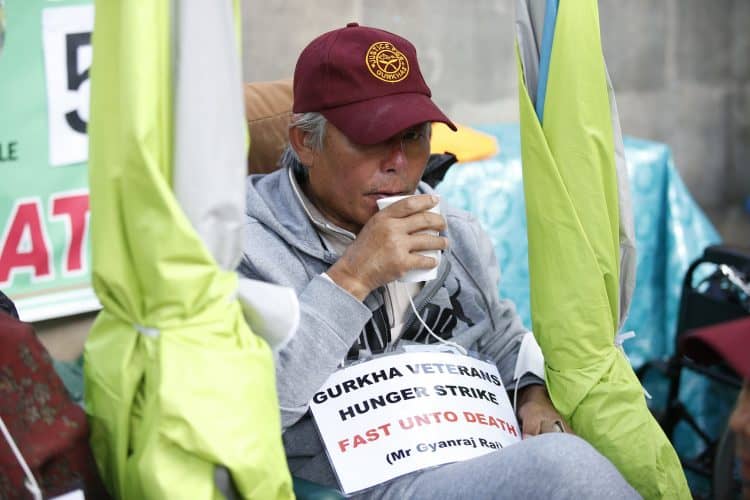 Gurkhas on a hunger strike opposite Downing Street have said more will join their protest if calls for pension equality go unanswered.

The group is campaigning for equal pensions for Gurkhas who retired before 1997 and are not eligible for a full UK Armed Forces pension.

The Support Our Gurkhas protesters, who reached their fifth day of not eating on Wednesday, say they have been “harassed” by police officers who took down their gazebos.

Dhan Gurung, 59, from Basingstoke, who has been protesting from his wheelchair in Whitehall near the gates to Downing Street, told the PA news agency: “When I retired from the British Army, my pension was £20 a month, whereas my British counterpart received £400 or more.

“What a trick by the Government; it makes me hurt still.

“There are 5,000 veterans in Nepal living in poverty. They are working in dangerous, difficult and dirty jobs to feed their families.

“It’s been difficult here, last night the police came here and said we could not do this. It’s harassment again.

“They came and harassed another time and dismantled all of our gazebos and pushed the ladies here, my wife, holding them and grabbing them – it’s unacceptable.”

The Gurkha men, recruited from the rugged Himalayan country of Nepal, have a reputation as hard and loyal fighters, and are known for the trademark curved kukri blades they carry sheathed on their belts.

Around 200,000 Gurkhas fought in both world wars, also serving in places such as Hong Kong, Malaysia, Borneo, Cyprus, the Falklands, Kosovo, Iraq and Afghanistan.

The change was brought in after a change in immigration rules in 2007, backdated to July 1997, meant that more retired Gurkhas were likely to settle in the UK on discharge, whereas the previous pension scheme had lower rates as it had assumed they would return to Nepal where the cost of living was significantly lower.

Mr Gurung, who served in the Army, called for fair payment, saying: “We will keep coming back here, we want to continue our hunger (strike) until death.

“We don’t care about sacrificing our life.

“The Prime Minister lives only 50 metres away; is he blind or deaf? Come here and face me.

“The Gurkha soldiers saved this country, if they don’t save the country, what will happen? Can anyone imagine?

“In every war the Gurkha soldier is in the frontline, how many have been killed in every war?”

Mr Gurung went on to say that “thousands” could join the protesters outside Downing Street if his demands go unanswered.

“Maybe if they don’t want to address this, next week more will be coming here.

“Not only the Gurkhas, British people are ready to come here and want to sacrifice with us.

“Let’s see how many people join, maybe they think ‘get the police to come here harass and they’ll give up’. Never.

“It’s better to die than be a coward, the Gurkha solider will never be a coward.”

A Metropolitan Police spokesman, said: “At approximately 9am on August 10, police attended a demonstration on Whitehall after a group of protesters had erected a gazebo and camping equipment in breach of local bylaws.

“Officers engaged with the crowd and the gazebo was removed. No arrests were made.”

Related: Charity launches film with Bear Grylls to educate people about the Gurkhas