AN INTERNATIONAL charity has launched a film to educate people about the history of the Gurkhas with the help of adventurer extraordinaire and television personality Bear Grylls. The Gurkha Welfare Trust, which is based in Salisbury, has made the three-minute film entitled ‘Who are the Gurkhas’ to educate the public about the elite Nepalese soldiers […] 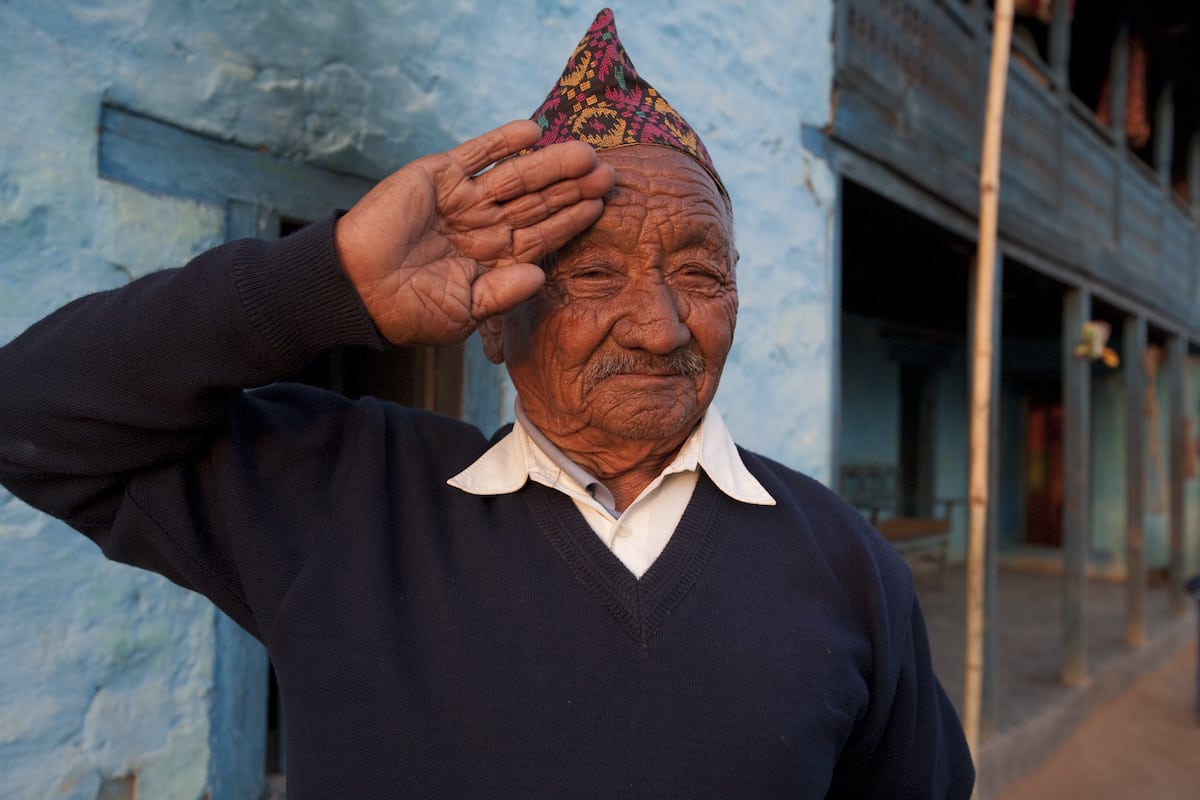 9686, GWS, GWT, Nepal, Tahalsing Rana, Tansen, Tutung Palpa village, WP, Welfare Pensioner NAME:TAHALSING RANA.RANK:RFNARMY NO:9686DOB:1924.REGT:2/8GRSERVED:1940 ñ 46.AWC:BUTWAL ñ TANSEN.VDC:NAYARNAMTALESWARD NO.:7West Nepal.DISTRICT:PALPA..Life History:..Tahalsing Rana was involved in heavy fighting in the Middle East and Italy. .He is a widower with one married son. He has handed over all his property to the son and has kept nothing for himself. He shares the house with the son but relies entirely on the pension to sustain. The pension allows him some degree of independence. He is suffering from high blood pressure. It takes him three hours walk to AWC to collect his WP and his life saving medicine.

AN INTERNATIONAL charity has launched a film to educate people about the history of the Gurkhas with the help of adventurer extraordinaire and television personality Bear Grylls.

The Gurkha Welfare Trust, which is based in Salisbury, has made the three-minute film entitled ‘Who are the Gurkhas’ to educate the public about the elite Nepalese soldiers who have a reputation as being some of the toughest and bravest on earth.

The animated film is narrated by Bear Grylls a friend of The Gurkha Welfare Trust who is well placed to appreciate the tough selection process and training which these men have gone through to become Gurkhas.

The film explains Gurkhas are traditionally recruited from the hill people of Nepal, who trace their roots right back to an 8th century Hindu warrior, Guru Gorakhnath. They first encountered the British in 1814, when the British East India Company fought against them during the Anglo-Nepalese War. British forces admired the Gurkhas’ military abilities and honourable tactics. The Peace Treaty that ended the war in 1816 enabled the British to officially recruit Nepali Gurkhas – and so began Britain’s relationship with Nepal.

Since then Gurkhas have served with distinction throughout the world, fighting in 30 major conflicts and earning an incredible 13 Victoria Crosses for acts of extreme valour, along with countless other medals

Adam Bentham, who works for The Gurkha Welfare Trust as a Marketing and Communications Manager believes the film is vital for people to fully understand who the Gurkhas are and their long history to understand why the trust exists and how crucial the work it does is.

Adam said: “We know if you were to stop people in the street and ask them about The Gurkha Welfare Trust they have usually heard about us and can tell you a little bit about Gurkha’s but they rarely know the history or really understand what these soldiers have done for Britain and why we owe them so much.”

In the late 1960s, following the end of various Eastern conflicts, there was a significant reduction in the number of serving Gurkhas in the British Army.

And it became apparent, many Gurkha soldiers and their dependants or widows in Nepal faced destitution in old age. Many of these soldiers had served in the World Wars. However, they had not served the 15 years needed to qualify for an Army pension and unlike their British counterparts they could not rely on the welfare state in old age, as it does not exist in Nepal.

In 1969 recognition of the country’s debt of honour to these soldiers, a public appeal, led by eight great wartime Field Marshalls raised £1m to establish The Gurkha Welfare Trust.

Now the charity ensures Gurkha veterans, their widows and their wider communities can live their lives with dignity. This is done with the provision of financial, medical and community aid in Nepal.