The nuclear blast was so big its impact was felt... 200,000 light years away, say scientists. 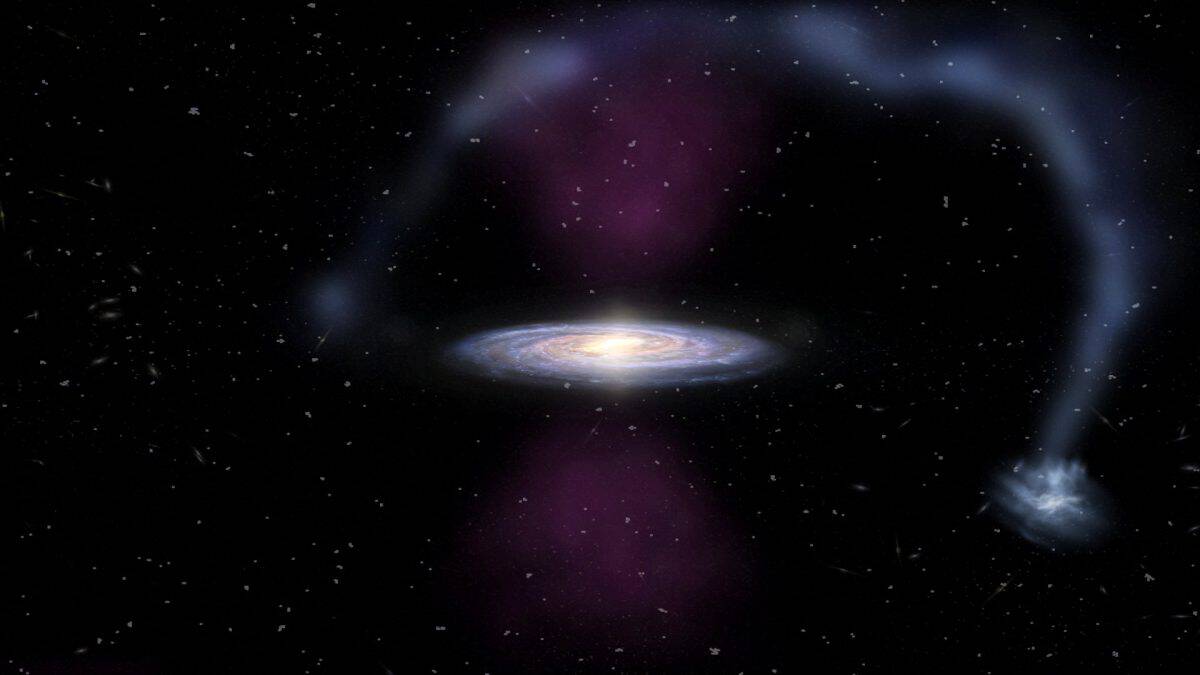 A supermassive black hole at the heart of the Milky Way exploded 3.5 million years ago… as our earliest ancestors roamed Earth, according to new research.

The nuclear blast was so big iits impact was felt 200,000 light years away, say scientists.

The cataclysmic cone shaped flare travelled though both poles of the galaxy – into deep space.

Study leader Professor Joss Bland-Hawthorn, of the University of Sydney, said: “The flare must have been a bit like a lighthouse beam.

“Imagine darkness, and then someone switches on a lighthouse beacon for a brief period of time.”

His team at Australia’s ARC Centre of Excellence for All Sky Astrophysics in 3 Dimensions (ASTRO 3D) describe it as a “titanic, expanding beam of energy.”

They have also likened it to both a ‘sleeping dragon’ or ‘sleeping beauty’ that has suddenly awoken.

Astronomers have long suspected such an event happened – and now they have finally dated it.

In galactic terms, it is astonishingly recent. On Earth at that time, the asteroid that killed the dinosaurs was already 63 million years in the past.

And our ancient ancestors, the ape-like Australopithecines, were already afoot in Africa.

Prof Lisa Kewley, director of ASTRO 3D, said: “This is a dramatic event that happened a few million years ago in the Milky Way’s history.

“A massive blast of energy and radiation came right out of the galactic centre and into the surrounding material.

“This shows that the centre of the Milky Way is a much more dynamic place than we had previously thought. It is lucky we’re not residing there.”

The phenomenon, known as a Seyfert flare, created two enormous ‘ionisation cones’ that sliced through the galaxy.

They began with a relatively small diameter close to the black hole – expanding vastly as they exited into inter galactic space.

The blue flare was so powerful it impacted on the Magellanic Stream – a long tidal tail of gas that extends half way around the Milky Way and lies 200,000 light years from it.

The explosion was too huge to have been triggered by anything other than nuclear activity associated with the black hole, say the researchers.

Named Sagittarius A, or Sgr A*, it is about 4.2 million times more massive than the Sun.

Orbited by a swarm of stars, it has been known about for decades. Evidence has been building of a real cataclysm in the past.

This is an extremely short period in galactic terms, said Prof Bland Hawthorn whose findings are to be published in The Astrophysical Journal.

The paper follows research reported by the same team in 2013 that first suggested SgrA* has sporadically burst into life.

Co author Dr Magda Guglielmo, also of the University of Sydney, said: “These results dramatically change our understanding of the Milky Way.

“We always thought about our Galaxy as an inactive galaxy, with a not so bright centre.

“These new results instead open the possibility of a complete reinterpretation of its evolution and nature.

“The flare event that occurred 3.5 million years ago was so powerful it had consequences on the surrounding of our galaxy. We are the witness to the awakening of the sleeping beauty.”

The latest work firms up SgrA* as the prime suspect in the spectacular explosion. But how black holes evolve, influence and interact with galaxies “is an outstanding problem in astrophysics,” added the researchers.

Black holes are just about the strangest objects in the universe. They are the power stations of galaxies, shaping them with powerful winds that sweep away inter galactic matter.

Even light can’t escape. That is why we cannot see them directly. We only know they exist from the odd behaviour of the stuff near them.

For example, gases swirl around them at nearly the speed of light, giving off lots of high energy radiation.

Recent research has also suggested the radiation they emit also has the potential for sustaining life – and can even facilitate photosynthesis.

The ‘biggest’ star in the universe has been unveiled by astronomers