The Prime Minister bottled it as his minder used the “F” word live on morning television show Good Morning Britain. 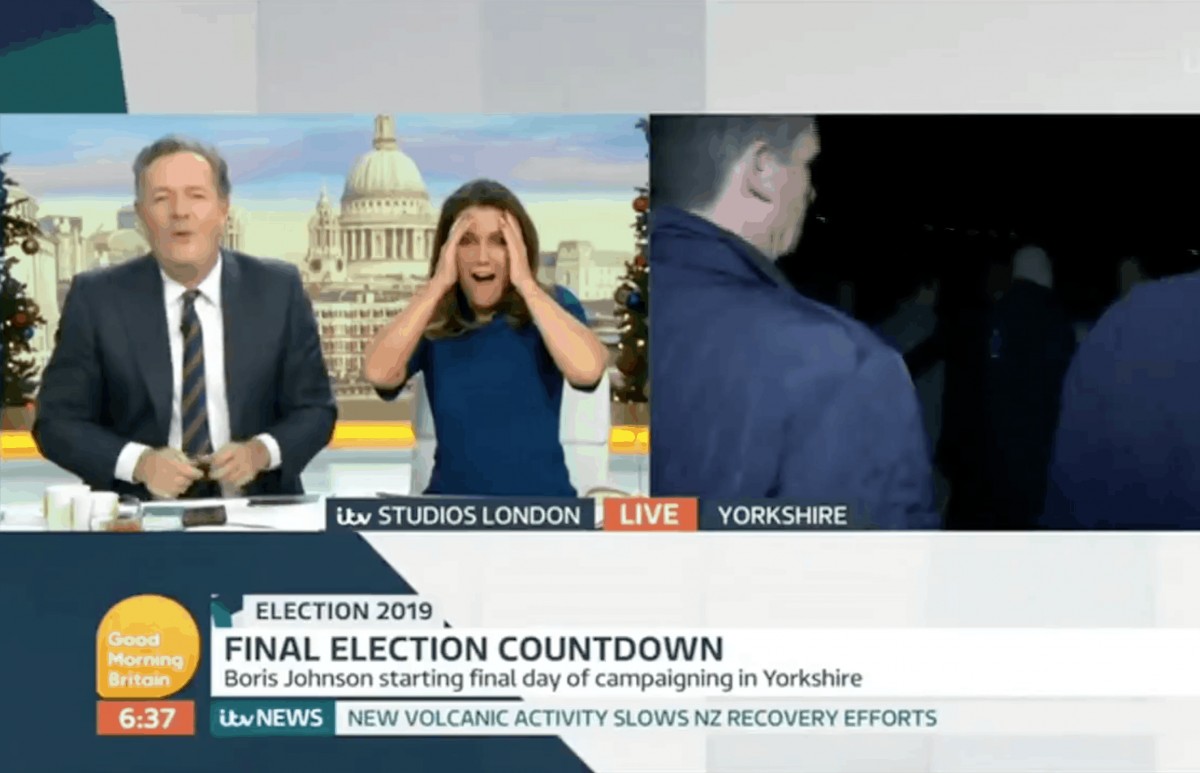 Trying to avoid any hard questions that might make him look foolish, this morning Boris Johnson got up early to pretend to be a milkman at Greenside Farm Business Park in Rawdon, West Yorkshire, rather than face the hard-edged political questioning of Good Morning Britain.

Hosts Piers Morgan and Susanna Reid were gobsmacked as the Prime Minister bottled out of his promise to appear on their show while pretending to be on a milk round.

Reporter Johnathan Swain asked the PM  if he would “deliver on your promise to talk to Piers and Susanna”.

Minders pushed reporters back as Boris Johnson could be seen hiding  behind stacks of milk crates and disappearing into the large fridge at the dairy depot.

The reporter was forced to remind the Conservative Party leader’s head of press: “Do you want to tone your language down as well because people are watching this this morning.”

“Cowardice is never a good look,” tweeted Piers Morgan after the bizarre behaviour.

The host later said that Mr Oxley called in to the show to complain that he did not assault the reporter.

The Conservatives said that the Tory aide was not swearing at the reporter. Reports have emerged that they are threatening to make a complaint about Good Morning Britain. Other complaints the party has made after Conservatives have been empty-chaired and embarrassed for chickening out of interviews and TV debates have not been upheld by TV regulator Ofcom.

To be fair, GMB has managed to expose how Tories’ election promises didn’t add up when his colleagues appeared on the show. The early morning light entertainment show hosts taught both Matt Hancock some maths when his figures on replacing the police officers Tories had cut didn’t add up,  and Nicky Morgan was schooled in maths when she tried to defend the flagship Tory manifesto promise on adding new nurses that didn’t quite add up either.

Good Morning Britain is not the first time Johnson has avoided scrutiny.  He was much derided for avoiding the democratic tradition of his own constituency hustings and even Sir David Attenborough called him “shameful” for swerving questions on failing to act on climate legislation on the leaders’ climate debate.

And of course an exasperated Andrew Neil had to detail the questions he would have made the PM squirm with had he turned up for an interview as all the other party leaders had.

Boris Johnson throughout the campaign has preferred ridiculous photo opportunities and empty soundbites about “oven-ready Brexit” to asking hard questions about whether that’s going to be a no-deal Brexit – which he refuses to answer – or the Tories’ record in office – with official figures revealing the UK’s economy is at its worst since the global crash.

Other questions he was perhaps avoiding while his minder was swearing on live TV today may have included his callous attitude to the public – using the London Bridge tragedy as an “opportunity” for political point scoring according to a bereaved dad who accused the Tories of lying that they had expressed any remorse to his family; or refusing to look at a photo of a 4-year-old with suspected pneumonia forced to lie on a pile of coats on the floor of an overstretched Leeds hospital with the NHS “imploding” with record waiting times still rocketing since they entered power in 2010 – an NHS that official documents reveal is being readied to be carved up with US firms vying to charge much more for medications.

Or perhaps his offensive views that have emerged that would have seen him suspended had he been a Labour MP under rules brought in under Jeremy Corbyn – who the Tory leader has repeatedly accused of not doing enough to stop antisemitism.

One book he wrote managed to fit in racist tropes about Jews, Muslims, immigrants and the British black community as well as using language such as “coon” and “half-caste”. His writings have also shown contempt for working class people as “feckless” and “unemployed” and working single mothers and their children too – though the PM refuses to say how many of those he is responsible for… Another awkward question that will probably remain unanswered.