'Our NHS is under the biggest threat ever of its life' 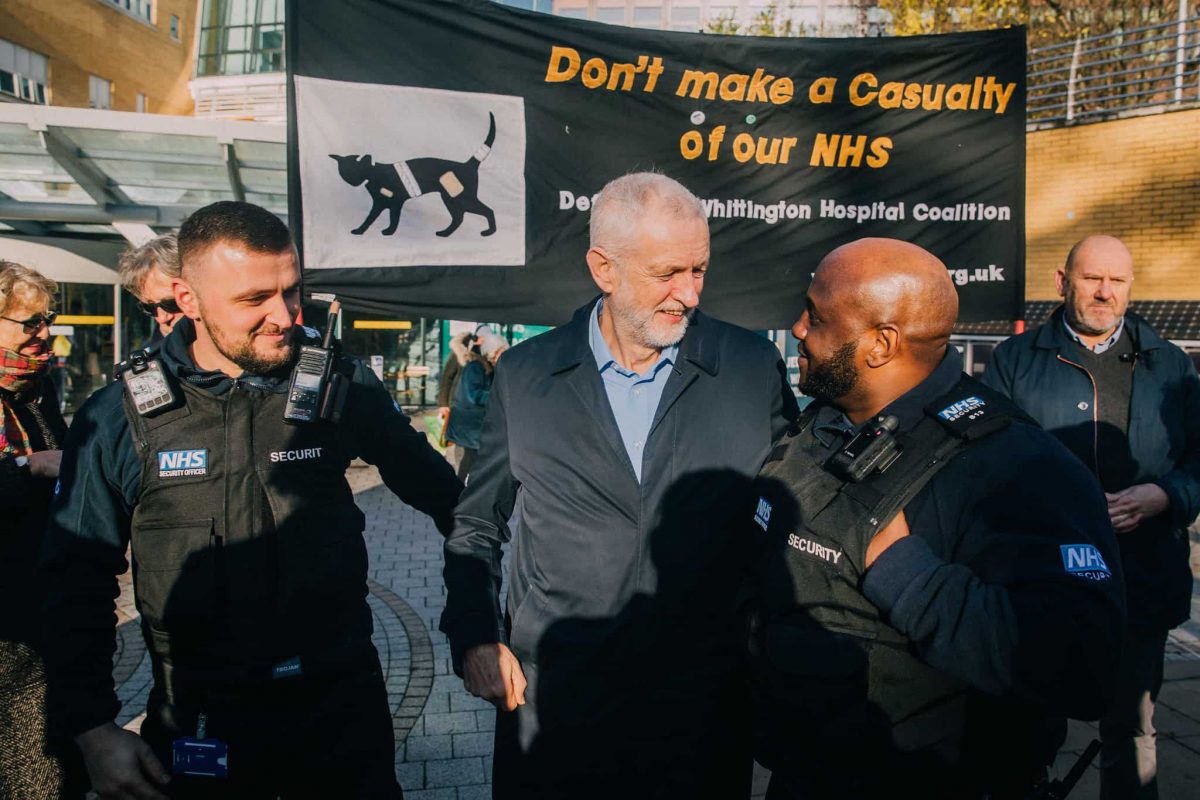 While dashing around the country campaigning to win the December 12 general election, Jeremy Corbyn made a stop at a North London hospital in between campaigning in Falmouth and Yorkshire.

On Monday the Whittington Hospital is facing a multi-million pound legal action in the High Court by Ryhurst, a subsidiary of Rydon, a company that worked on cladding Grenfell Tower in Kensington, west London before the 2017 blaze.

The cash-strapped NHS trust had been forced to turn to Ryhurst in a property development deal which was put on hold after the Grenfell tragedy, then ditched in June 2018 when the hospital was bailed out financially.

Next week as Britain prepares to vote, the corporation is set to pursue the hospital for millions in compensation, money that could be spent in the NHS trust’s acute wards, paediatrics or its maternity suite.

Jeremy Corbyn and other North London Labour MPs Catherine West and Emily Thornberry have long campaigned against cuts for the North London district and general hospital and against this corporate law suit.

The London Economic caught up with the Labour leader as he turned up to stand up for the hospital and delivered  a hair-raising speech on the plight of the NHS. A vital speech that you won’t see covered on the news or in most papers.

Jeremy Corbyn told me the Labour party had been “very disappointed” by “the bias of most of the country’s mainstream media during this election campaign.” And equally disappointed by the TV news media’s one-sided coverage during such an important election.

Yet Corbyn’s speech is a vital one and well worth a watch  as he outlined succinctly the threats the NHS faces this week.

‘Our NHS is under the biggest threat ever of its life’

As the Whittington’s lawyers defend the hospital against a private contractor in court, Corbyn said he hoped people around the country would turn up and vote to defend the NHS from a Conservative Government that is already discussing deals that will make it harder to afford to treat patients.

Referring to the internal documents of the UK/US trade deal discussions he had revealed, Jeremy Corbyn warned: “our NHS is under the biggest threat ever of its life.”

He began by explaining how vulnerable NHS trusts are to lawsuits by private companies seeking a piece of the NHS. – A situation that will become much, much worse if the UK health market is opened up to competition in the ways discussed in the US/UK trade dossier that Labour revealed last week.

“The fundamental issue is the underfunding of the National Health Service that means they go down this terrible road of bringing private contractors in to run services,” explained the Labour leader. “And then those contractors who don’t necessarily get the contract sue the NHS for not getting the contract.

“Well this is the height of absurdity.

“And now our NHS is under the biggest threat ever of its life with this Trump trade deal with the United States.”

Turning to the negotiations between UK and US officials that Labour have uncovered, Jeremy Corbyn said: “There are 500 pages of these documents the Government refused to release and what these documents show quite clearly is a number of things were put on the table by the US and then sent away for writing into treaty form by the officials.

“And they were one: the US pharmaceutical companies wanted access to our health market.

“Secondly, they wanted patent extensions on the medicines, because Donald Trump has said it himself many times – that medicines outside the USA are too cheap. And he objects to the power of NICE – the clinical excellence commission which can negotiate cheaper prices for medicines and obviously once the patent is through they can be manufactured and sold in the generic form.

“And then they also said that there could be no reference in any trade deal with the USA to the greatest issue facing the planet which is global warming and the climate emergency.

“All of that was designed to be secret. All of that we’ve no blown out into the public domain.

The Labour leader said a Labour government would “properly fund the NHS” and he promised: “We will end the privatisation of the NHS. We will end this nonsense of private companies suing the NHS.”

The Labour leader also details measures that could make medications cheaper and used the case of Luis Walker as an example. In 2018, the nine-year-old cystic fibrosis sufferer asked then Prime Minister Theresa May to help him access the life-changing drug, Orkambi. But, after having no luck, Luis wrote to Jeremy Corbyn,  who vowed to take on the fight for the expensive drug to be made available.

After the Labour leader’s intervention, this year the NHS reached a deal with pharmaceutical giants, Vertex, allowing the drug to be made available to UK patients too. Patients like Luis, who has designed Jeremy Corbyn’s Christmas card this year.

Corbyn praised NHS staff and referring to the Whittington Hospital that he has long defended from cuts along with local patients groups and campaigners Corbyn added: “this hospital is something that is very personal and precious to me and this campaign shows that our NHS came because people campaigned for it.

“Our NHS survives, because as Aneurin Bevan [who led the establishment of the NHS] said, it will last as long as there are folk around to fight for it. We fought for our hospital and won and we are going to fight for our NHS on December 12 and win then.”

Jeremy Corbyn took time to speak to hospital staff, guards, supporters, locals, including the homeless outside the hospital before he left on his whirlwind campaign to bolster the Labour vote on December 12.

On Monday, the High Court will consider Ryhurst’s claim “in excess of £4 million” from the Whittington Hospital.

For more about the case: read this.

How the NHS would fare against multinational law suits after the sort of Trump – Johnson trade deal to open up our NHS revealed by Labour last week doesn’t bear thinking about.

Something to consider on December 12 indeed.