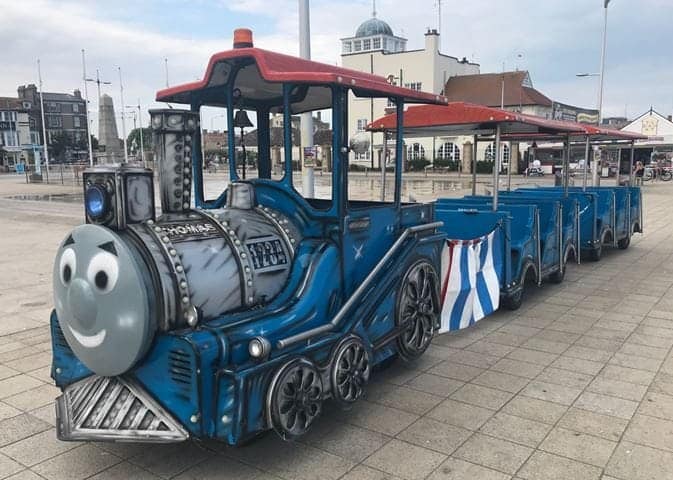 A man has been arrested on suspicion of stealing a seaside Thomas the Tank Engine from a coastal promenade.

The Thomas the Tank Engine train, which is popular with children and families, usually runs up and down the South Beach promenade on the seafront at Lowestoft, Norfolk.

The land train has a distinctive blue “locomotive” with a Thomas the Tank Engine face, an orange canopy and two passenger carriages.

Darren Weavers, a friend of the owner, said, “A large lorry with a crane would have been required to move it.

“We have reason to believe it is on its way to Scotland. It was parked up around 4.30pm on Tuesday secured in the container.”

But members of the public struggled to understand how thieves had managed to cover their tracks.

Mum Shannon Cooke, 36, said: “It’s an enormous train, how does someone steal that in broad daylight without anyone noticing?

“It’s not as if you can smuggle it under your jacket, is it? Surely someone knows what’s happened o it.

“We’ve been joking it’s the next Great Train Robbery!”

Her pal Donna Matthews, 34, said: “We just can’t really understand why someone would want it. There’s not much you can do with it!

“It must be someone who really loves trains – or Thomas the Tank Engine, I suppose

“It’s a shame for the kiddies as they loved seeing it go up and down.”

Carl Andrews added: “Shouldn’t be to hard to find! Unless they repaint it red and call it james lol.”

And Marion Fowler said: “What on earth would you do with it? Hardly unnoticeable.”

The slow-moving land train was introduced to Lowestoft seafront in 2016 as the first of several new beach activities.

It was hoped it would encourage visitors to the town following the completion of a £3.5 million coastal protection scheme.

The new venture was part of an economic regeneration plan developed by the Lowestoft Coastal Community Team called Seafront Strategy.

The Thomas train was free to ride but donations were welcomed.