Lily said: "It was really funny. The people behind me saw him delivering it and the mood changed." 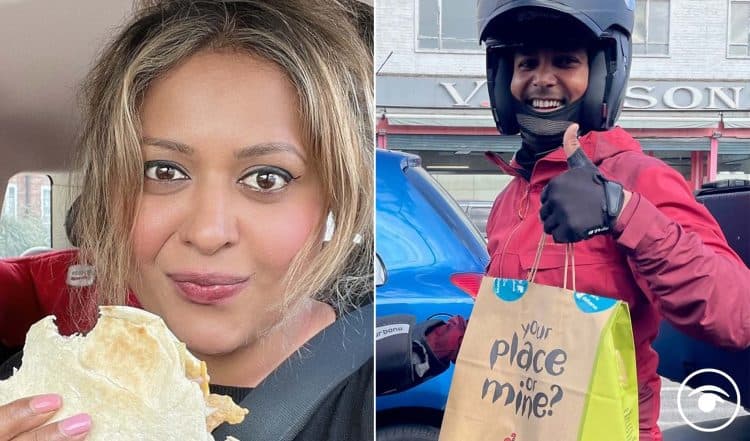 A hungry driver forced to wait two hours to get fuel left fellow motorists in hysterics today (tues) after she ordered a NANDO’S to be delivered directly to her car.

Lily Potkin, 40, found herself trapped in “the mother of all queues” as she tried to fill up her car on Tuesday lunchtime amid the ongoing fuel crisis.

But the mum-of-three quickly got peckish as she waited, prompting her “genius” idea to order a Nando’s chicken wrap and peri-peri chips from Deliveroo to her car.

Lily said: “It was really funny. The people behind me saw him delivering it and the mood changed.

“Everyone was really aggy and then I could see all the people behind me cracking up. They were just in hysterics.”

Lily also got a visit from her aunt, who lives down the road and brought her more snacks as she waited in the queue in Kingsbury, northwest London.

Lily added: “I joined the queue just before lunchtime. My car was on zero and I’ve got to do the school run.

“Everything in me was saying ‘go home you idiot’ as I was sat there getting so hungry.

“It took me an hour to get around one side of a roundabout.

“I sat there and I thought about what my husband was having for lunch and got really hungry.

“The traffic was moving so slowly so I thought I could get a Deliveroo where I was.

“I put the delivery pin a little bit further down the road and he just pulled up right outside my window.”

Lily, who works at a tech firm, documented her Nando’s delivery in a Twitter thread, where she dubbed herself a “genius” for getting a Deliveroo.

Other social media users praised Lily as an “absolute hero” and thanked her for brightening up their days.

Helen Carr said: “You are an absolute hero! Well done on the Nando’s, your lovely aunt, and the petrol x”

Lily, who works at a tech firm, said that the petrol station was “absolutely mental” when she finally arrived two hours after leaving her home.

She could only fill up with £35 of fuel due to new restrictions and even got stuck behind someone who had put the wrong fuel in their car.

Lily said: “It’s like the hunger games. The forecourts are filled with people with their fuel canisters.

“There are normal people marshalling others around the station.

Related: Brits are flogging petrol on Facebook for quadruple the pump price