Sarah Crossland, 32, found the note posted through her car window after picking up essential supplies for a friend during her own weekly shop 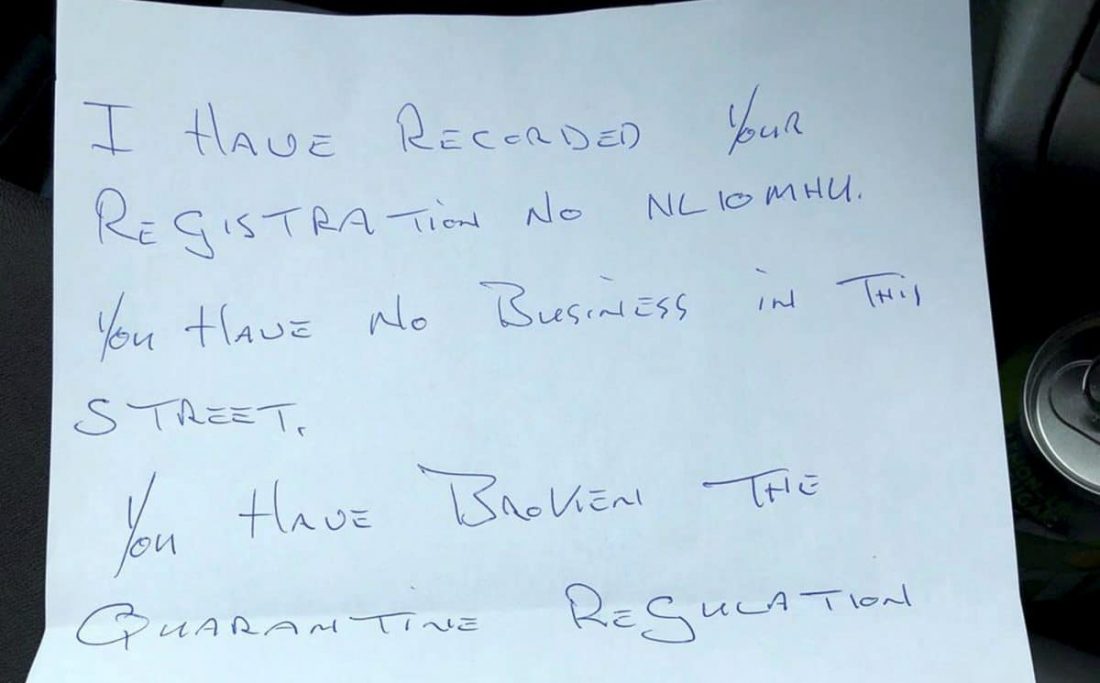 A Good Samaritan was shocked to find an angry note in her car as she delivered food to a vulnerable friend who could not got shopping during the lockdown.

Sarah Crossland, 32, found the note posted through her car window after picking up essential supplies for a friend during her own weekly shop.

The project manager said she had been following government guidelines and dropped the food at her pal’s doorstep and stepped back two metres.

She said she had a brief chat with her friend who paid her for the shopping and was there for no longer than five minutes.

Government advice recommends that those who are vulnerable or self-isolating, ask friends, family and neighbours for help during the lockdown.

But when she returned to her car, she noticed a “passive aggressive” note on the drivers seat that had been pushed through her window, which was slightly open.

The note, written in block capitals, reads: “I have recorded your registration. You have no business in this street.

“You have broken the quarantine regulation lockdown.”

Sarah, a mother of three from Leeds, West Yorks., said she was shocked and annoyed to find the note on the driver’s seat of her black Renault Modus.

She said: “The thing that really annoyed me is that they could have spoken to me and asked me what I was doing.

“I would have explained and I could have reassured them.

“They could have spoken to me from two metres and kept us both safe.

“But actually by placing a note through my window they could have contaminated my car.

“I’d left the window open because I was only going to be there for five minutes and it was very warm.”

Sarah, who is self-isolating with her husband and three children, follows government advice and only leaves the house for a weekly shop or thirty minutes of exercise.

She visited her local ASDA on Thursday (8/4) and offered to pick up essential items for a friend who cannot go shopping herself.

She added: “My friend is a single parent of two children and one of her kids has a chronic lung issues.

“She can’t leave her children with her parents while she goes shopping during the lockdown so relies on delivery slots.

“She has been struggling to get one and was low on food and was desperate, so I offered to pick her some bits up while I was doing my weekly shop.

“When I did the shopping, I followed government guidelines at all times.

“I left the bags at her doorstep, knocked on her door and stood back two metres.

“We had a little chat as she collected her shopping, but I was two metres away at all times and I was only there for five minutes.

“I didn’t go into her house and we never made contact.”

Sarah said she was initially shocked at the “judgemental” note, but now feels sympathy for the person who left it.

She added: “At first I thought ‘oh my god, you curtain twitcher’.

“I thought ‘is there actually people doing this?’ I was really surprised.

“I was annoyed because they didn’t bother to come and ask me what I was doing so I could explain myself.

“The shopping bags should have been a giveaway though.

“But I do understand they were probably just scared of what is happening and they’ve seen me on the street.

“They’ve probably put two and two together and got five, so I have actually got a bit of sympathy for them.”