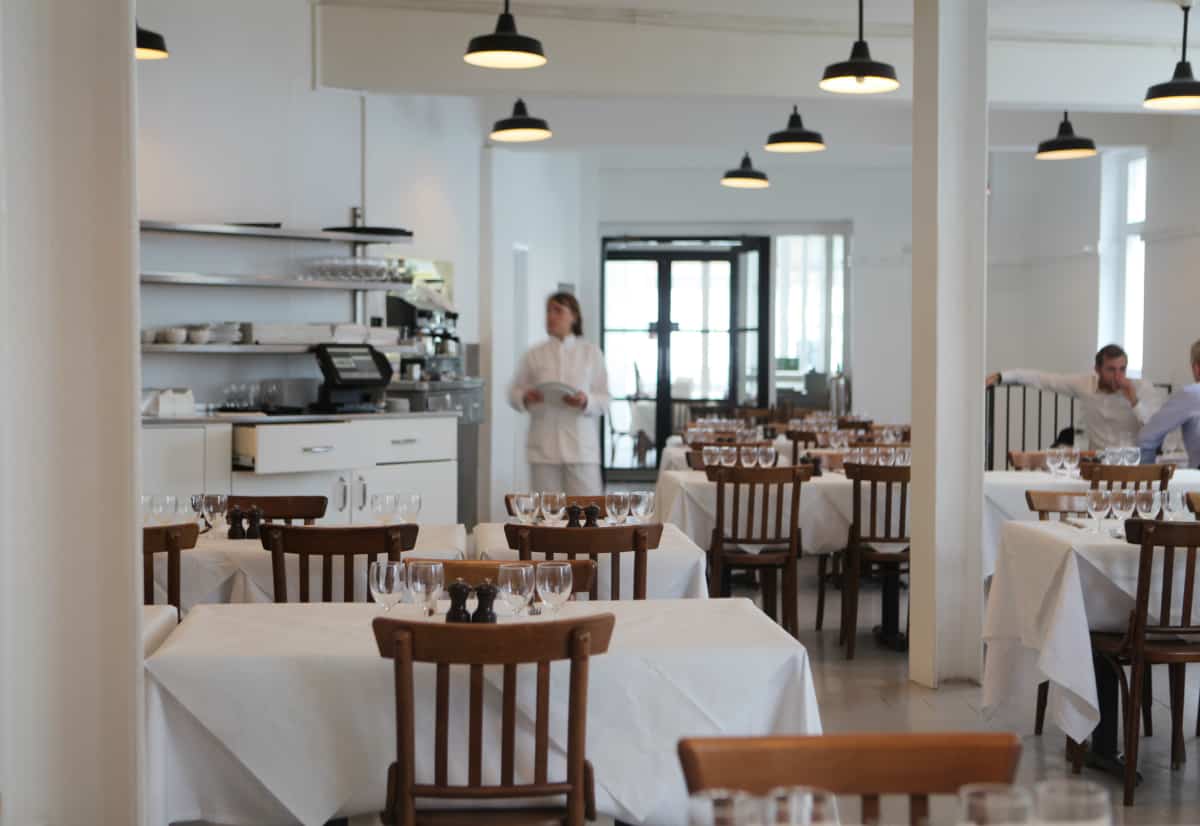 For almost 27 years, St. JOHN has played an instrumental role in shaping the way we eat. Even if you’ve never eaten at the Michelin-starred Smithfield restaurant, or one of the few offshoots (Bread & Wine, et al.), you’ll have almost definitely eaten something from a chef intrinsically inspired by the cooking of Fergus Henderson and Trevor Gulliver. Even if indirectly. From the world-famous bone marrow salad to the nose-to-tail ethos which permeates much of the menu, St. JOHN is an unapologetically classic restaurant, but still somehow manages to stay ahead of the curve. Trends come and go, then come back again, but St. JOHN has remained practically unchanged for the past quarter of a century. And that’s part of the appeal.

At St. JOHN the kitchen celebrates everything great about modern-day British cooking. ‘British’ cooking is typically whitewashed as bland, stodgy, and unexciting, which is very often the case when talking about the ‘white British’ cooking of our parents and grandparents’ generations. But British cooking at its best takes countless influences from afar. As well as enriching culture and society, immigration and sharing of knowledge has profoundly enhanced British cooking and ultimately made it great. From the Italian simplicity of highlighting produce, generally limited to no more than three or four core ingredients; to pickling fish and vegetables; confident spicing; and the entirely French wine list – those influences are stamped all over St. JOHN’s menu, even if they’re not always obvious. It’s a celebration of years of both immigration and Europe’s influence on British cooking, yet approached delicately without appropriation.

The future of eating out

Since restaurants were forced to close during the first lockdown, the future of Britain’s hospitality venues has remained uncertain. Even though a fragment of government support has been extended, many independent restaurants continue to briskly tread water, fighting to stay afloat. I continue to worry about the future of eating out, but have been particularly concerned about the livelihood of my favourite restaurants.

Earlier this year, St. JOHN launched a selection of meal kits for the first time ever in anticipation of being able to open during the spring. But with no outside seating, the restaurant was forced to wait until Monday 17th May to re-open for the first time in six months. I’d hoped to visit on opening day, to eat my first restaurant meal of the year, but couldn’t get a table at a reasonable hour until a Sunday afternoon weeks later. Walking from Smithfield Market car park, I was still concerned the restaurant would be quiet, struggling to regain momentum.

After checking in, we were led up to the main dining room. Walls are white-washed and the space is without art or music. Wooden chairs sit at tables dressed with paper table cloths which lend a canteen ambiance, rendering the space a blank canvas for the food to stand out. Service is polished yet equally down-to-earth, and there’s also a refreshing ‘no portable telephones in the dining room’ rule. I was shocked and elated to see every (socially distanced) table full. It didn’t even matter that we had one of the worst tables in the restaurant, up against the wall and barely capacious enough for the amount of food we were about to order. As is customary, we ate like Tudor kings.

At St. JOHN, meat dishes are particularly championed, with whole carcasses bought in and butchered onsite, leaving the kitchen plenty of offal to play with. Prime cuts are cherished, but lesser-loved components are particularly eminent, also allowing the restaurant to charge reasonable prices. Mains rarely surpass the £25 mark.

Meat isn’t the be-all and end-all, however. The menu changes daily, with a prominent focus on seasonality, and apart from dishes such as the bone marrow salad, Eccles cake, and Madeleines, there’s always something new on the menu. You could literally visit every day and eat something different. Yet there are some essentials for first-timers and regulars, alike. Bone marrow and parsley salad is a must-order, at least for the table.

Four bones from the middle of the calf’s leg are roasted and served on an ordinary white plate, towered like the Ferrybridge power stations. They’re served with a lobster pick as a tool for scraping the oily marrow onto slices of toast, topped with a simple salad of “disciplined” parsley, capers, shallots, and lemon juice. Finally, a pinch of salt is recommended as one final piece to the puzzle. it’s a concerto of corresponding flavours, perfectly balanced without bullying. Like everything else on offer at St. JOHN, it’s served without a shred of wanton wankifery.

A tranche of lightly pickled mackerel followed, also joined by some pickled carrot and radish, sandwiched between a slab of rye bread and a quenelle of crème fraiche which worked to slightly tame the dish’s acidity – enough to slice through the fish’s oiliness like a chainsaw through butter. Elsewhere, a seemingly simple salad of endive, watercress, and roasted shallots was studded with shards of brittle pig’s skin in place of croutons, enough to make a life without complex carbohydrates seem manageable.

Another fish dish harboured a fillet of pollock crowned with crispy skin, convoyed by slow-cooked violet artichokes and a dollop of vibrant yellow aioli. Best of all, a hunk of braised mutton had a profound depth of favour, spiked with anchovy and served in its cooking liquor alongside a generous fistful of broad beans. Simple seasonal cooking at its absolute best. Like the bone marrow salad, Welsh Rarebit is another essential extra to accompany mains, offering a whack of umami, irrigated with Worcestershire sauce.

To finish, one the restaurant’s famous Eccles cakes was served with a wedge of Lancashire cheese, as it should be, while plump madeleines were transcendent as ever, served fresh from the oven. We ordered another dozen to take away, fighting the urge to eat them on the way home.

Waiting for the bill, I booked another table for what was supposed to be known as ‘freedom day’. Lockdown restrictions would be eased, life would be back to (almost) normal, and I’d be free to go almost anywhere; but there are few places I’d rather be than at St. JOHN.