With his new novel Sweet Song, Bitter Loss, author Paul Hencher has delivered a superbly crafted crime thriller filled with twists and turns that will leave you gasping. Part of its appeal lies in its unusual setting –the rustic Abruzzo region of Italy, which he has called his home for the past 15 years. Here, he explains how the idea for his novel came about, and why the scenic beauty of Abruzzo works so well for a tale of despair and death. 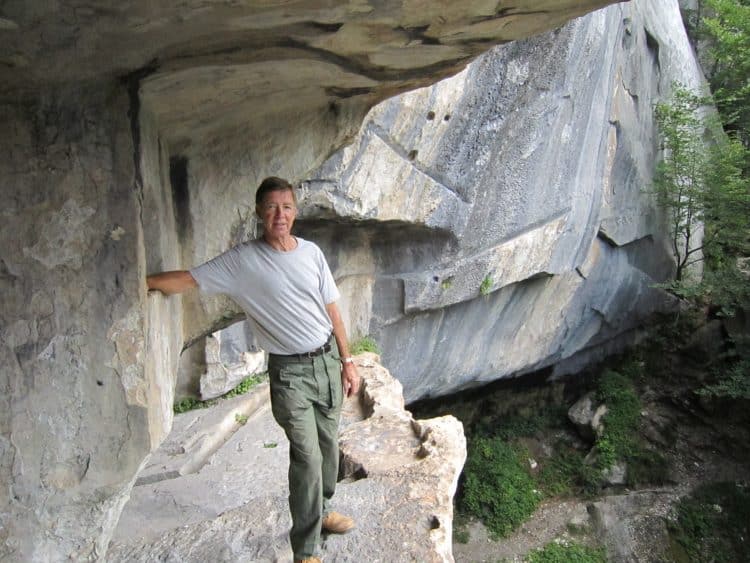 It has been said that if iconic crime fiction author Agatha Christie is to be believed then the most dangerous place on the planet to find yourself is the British countryside.

For behind the rustic charms, quaint customs and rosy cheeked smiles of the local villagers, murder most foul was invariably taking place, with amateur detective Miss Marple always on hand to solve the mystery.

I can’t profess to being a devotee of Christie but there is something in that discrepancy between a charming location and despicable deed that resonates with me, and which I have explored in my own crime writing, which replaces the British beauty spots with something more Mediterranean.

Murder was the last thing on my mind when I have first moved to rural Italy, back in 2007. In fact, my relocation from the brooding skies of Northumberland to the sun-drenched climes of Abruzzo was as much to do with pragmatism as chasing the Italian dream.

My wife, Maggie, had reached retirement age and, while we still had part of our mortgage to pay off, we calculated that if we sold our house, we could use the equity to buy more cheaply in Italy.

Furthermore, if we held some of the money in reserve, we could manage to live frugally, grow some of our own food, and use the income of a single pension wisely to enjoy retirement together.

Thus in March 2007, the month of my 57th birthday, towing a trailer tent for accommodation, we arrived on the outskirts of the Abruzzo village of Filetto to take possession of a derelict stone cottage with three hectares of land, mainly comprising deciduous woods.

The next few years were spent renovating the house and clearing some of the land, including a sizeable vegetable plot, but we still found time to enjoy walking in the nearby Apennines with our newly-acquired rescue dog, and savouring the friendly, relaxed lifestyle afforded by rural Abruzzo.

And once the hunters were banished from our land, we soon came to appreciate the spectacular birdlife, including species such as golden oriole, hoopoes, bee-eaters and various different types of woodpecker.

We also discovered a wonderful range of woodland animals. We once spotted a pine marten peeping through our living room French window, doubtless confused because the living room had enclosed a patch of land where a mulberry tree had formerly stood!

By 2013 the hard work was completed, and now blessed with time to enjoy life at a leisurely pace, I retrieved from a bedroom drawer the manuscript of an historical novel I had written some 15 years earlier while still living in Northumberland, but which I had never shared with Maggie.

I tentatively asked if she would like to read it, then waited nervously for the verdict.

“It’s not bad,’” she said enigmatically, which in Maggie-speak I took to mean “It’s pretty good”.  This interpretation was confirmed when she went on to declare, “You should get it published”.

After some unsuccessful submissions to literary agents, I self-published the novel, The Leopard of Dramoor, at virtually zero cost.

The story of a freeman caught between competing powers of Church and earldom, a pawn inconveniently in the way of bishop and knight, it was later republished professionally by Matador under a new title, Shackles of Loyalty.

Encouraged by the response of readers, including none other than Liz Franklin, the author of so many excellent cookery books, I wrote a follow-up, split between the time of Shackles of Loyalty – i.e. 12th Century Northumbria – and the present.

I sent the manuscript to my small band of willing beta-readers, but received a lukewarm response, so that novel, Bridge of Destiny, was scrapped. You can’t win them all.

The urge to write a new book, however, wouldn’t fade.

“I want to write about my impressions of life in Abruzzo,” I declared to Maggie.

“Interwoven to a crime story,” I ventured. Pause. “Oh …,” came the response. I think Maggie felt it was a bit of a stretch to imagine hardened criminals ensconced in our friendly, peaceful corner of rural Italy.

That was, until I reminded her that the nephew of someone who lives a few kilometres away had been murdered in a Mafia-style killing. Motives for violence can affect anyone, anywhere, while the tentacles of criminal activity can reach even the most tranquil communities.

The germ of an idea for a book took root and grew. Although I possess few accomplishments, two that I can fairly confidently boast are a vivid imagination and ability to observe.  I find I am frequently mulling the question, ‘What if?’

Sometimes, the thought process takes me to dark places where it would be better not to go, yet it was pondering a ‘what if’ scenario that prompted the plot for my gritty crime novel, Sweet Song, Bitter Loss.

And although I wasn’t conscious of the fact at the time, I realised in hindsight that Giovanni, the boy who goes missing from his family home in the story, is actually part autobiographical.

I spent some of my formative years living in Cyprus, an idyllic childhood in which I explored both countryside and sea. I was a free spirit who learned to love nature in all its forms, and I probably never fully re-adjusted to life in Britain.

With the story coming together, I needed a protagonist upon which to hang it. Thus Major D’Angelo of the Arma dei Carabinieri (one of Italy’s police forces) was born. A physically imposing and brusque yet kind and thoughtful individual, he takes charge of the search for poor Giovanni, uncovering criminal activities far more dangerous and complicated than anyone could have imagined, including a people-trafficking gang.

Since the novel’s release earlier this year, I have been thrilled to see how well it has been received. Intended as crime fiction with a flavour of Italy, it has kept readers glued to their seats.

I feel my writing has been greatly helped by many years of enthusiastic involvement in amateur theatre. While writing, I try to live within the minds of the characters while recording their words, thoughts and reactions.

There are several threads running through Sweet Song, Bitter Loss, but there are nevertheless points of connection.

The characters vary in type, from victims of exploitation to a senior politician, from young to elderly, and from a range of different circumstances.

I particularly like to create strong female characters, the most notable in Sweet Song, Bitter Loss being Sergeant Teresa Rossi, Major D’Angelo’s trusted colleague, who travels to England in pursuit of a lead. Other strong female characters include Laura, Giovanni’s sister, who searches for her brother, and Maria, a young Vietnamese girl who defies her captors.

Enthused by the positive reaction to my novel, I now envisage a trilogy of Major D’Angelo Mysteries.

The second book of the series, which I am close to completing, will see D’Angelo searching for clues to the brutal killing of a young mother, a refugee from the conflict in Syria.

Hopefully, readers won’t have too long to wait before they can once again revisit Abruzzo, enjoying the Italian scenery as they follow Major D’Angelo and his team in their pursuit of justice.

Sweet Song, Bitter Loss by Paul Hencher (Matador), is available on Amazon or via the publisher in paperback and eBook editions, priced £9.99 and £3.49 respectively. For more information, visit www.PaulHencher.com.