The Mercedes EQC is the German brand’s first foray into the luxury EV market. How well does it hold its own in the class? 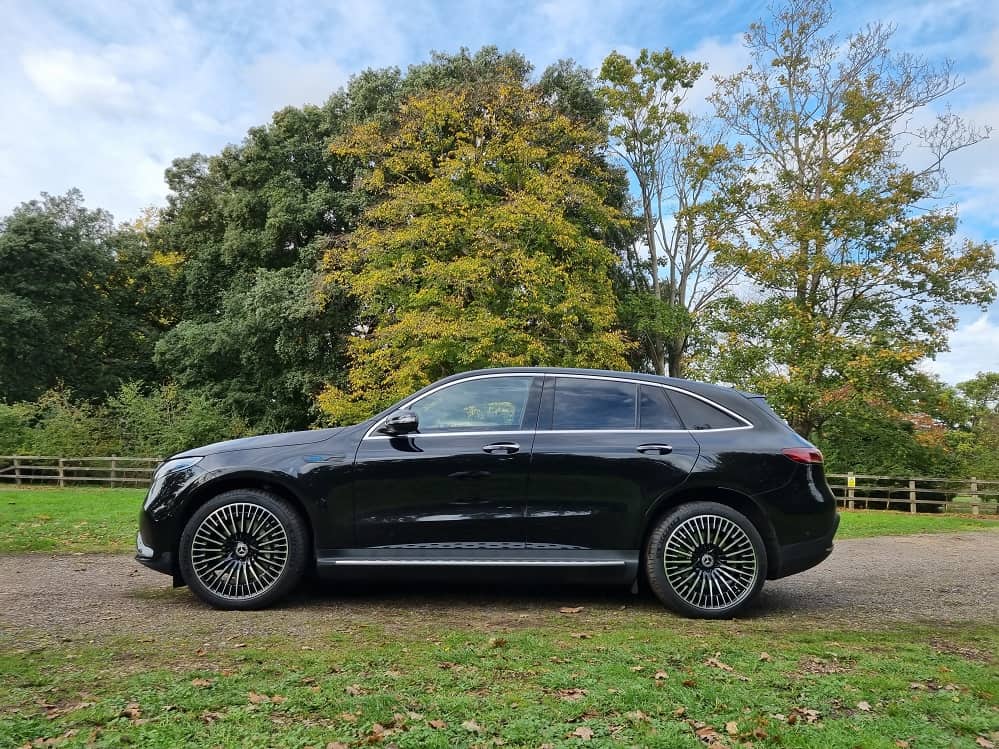 Will we miss the noise of internal combustion engines once they are fully eradicated from our lives? In some cases, absolutely. The roar of a naturally aspirated V8, the growl of a V10 or V12, the scream of a highly strung flat six. Those noises are part of the automotive landscape and will be pined for by romantics long after the 2035 ban of the sale of ICE cars in the UK. Those engines, however, are the exception rather than the norm. In luxury circles, manufacturers have spent a lot of time and money excluding the noise of their powerful engines from the cabin. This crossed my mind when driving the Mercedes EQC, because it’s silent. Turn the radio off and you hear absolutely nothing.

Now, I’m one of those romantics who will be bemoaning 40 years from now to my grandchildren that they don’t make cars like they did in my day. Which is what my Dad is saying to his grandkids already. Yet I found the solitude afforded by the Mercedes EQC comforting. On a meandering drive through the English countryside down to Rye for the weekend, it slotted me, wife, two children and brother in-law, plus all of the associated luggage in no problem. Then we just serenely set sail.

In hammering rain on the way back, it was a rather nice place to be. Kids asleep, Five Live keeping me up to date with the football; I’d rather have been in the Mercedes EQC than a supercar. It’s supremely unfussy and just quietly carved its way through the back roads of Sussex. It felt like a Mercedes should feel.

Luxury and refinement are clearly the order of the day and that best be your primary motive for wanting one, because things get a bit out of shape when you lean on it. The Mercedes EQC is not a B-road basher. Weighing as 2425Kg before the addition of five people and luggage, it doesn’t take much to prompt a bit of understeer. The body leans into corners, very much encouraging you to embrace the calmer side of its personality.

Stick Classic FM on or something. Roll with it. I guess you already knew that a 2.5ton+ car might not mimic a Toyota GR Yaris down a country road.

In a straight line, however, the Mercedes EQC is well capable of flexing a bit of muscle. The dual motor set up (one for the front wheels, one for the rear) kicks out 404hp and 760Nm of torque. The backend hunkers down and 0-60mph is ticked off in just 5.1secs. It might weigh the same as a small planet, but the Mercedes EQC will match the GR Yaris off the line.

I prefer SUVs that don’t try to be something they’re not. If you want a supercar, why not, you know, buy a supercar? Super SUVs can be impressive to drive, but also fatally compromised and confused. The Mercedes EQC offers no such juxtaposition. This is every inch a luxury car, offering a refined ride in a well-appointed cabin.

On the motorway it excels. Many EVs lack midrange punch, but there’s enough in the Mercedes EQC to keep you progressing. So, what it may lack in thrills and spills, it more than makes up for in comfort and refinement. You wouldn’t take one on a track day anyway.

Practicality in the Mercedes EQC

The only thing to keep an eye on is the range. The claimed WLTP range is c.255 miles but the car never even pretends to offer that. On a full charge before heading off to Rye it claimed 197 miles were available. Now, this does take into account how the car has been driven over its lifespan. Bear in mind this is a press car, so it will have been driven in a multitude of ways by a multitude of drivers.

I drove steadily across 284 miles and achieved 2.6 miles p/kWh. With an 80kWh battery capacity, this equates to 208 miles of range. So, the predicted range in the car is pretty accurate, which is a big tick in the box versus some other EVs.

This meant that the 150-mile return journey to Rye was easily ticked off without anything in the way of range anxiety. Which is just as well, because public charging down there is almost non-existent. To help you out when it does arise, however, the satnav will suggest charging stops along your route when going further.

Getting everything in the Mercedes EQC wasn’t too bad, either. The 500-litre boot is only 50-litres down on the Mercedes GLC, upon which this car is based. Batteries tend to rob you of a lot of space compared to their ICE equivalents, but Mercedes have got around this rather well.

Taking stuff for a baby meant a lot of space was already accounted for, but the high loading space made getting everything in straightforward enough. An adult could even fit comfortably between two kids’ seats in the back. So, for everyday family use, the Mercedes EQC works perfectly well.

When exploring the spec sheets and prices prior to the Mercedes EQC arriving on my drive, I was sceptical. You can get a Mercedes GLC AMG Line for £51,000. The Mercedes EQC 400 AMG Line starts at £74,000. Add options such as fancy wheels and Burmester sound system and that price ticks up further still. Could the EQC really justify the hike in price?

To my surprise, it does. It proved me wrong. Luxury SUVs are so well suited to electric powertrains. You don’t miss the thrum of an engine because this isn’t a car that would ever really encourage you to run through the gears manually. It stays in its lane, offering refinement throughout.

Now, that can undoubtedly be construed as dull, but such cars aren’t designed with thrill seeking in mind. I came to like the Mercedes EQC for that. It is well capable of puffing out its chest away from traffic lights, but there’s no sense of a car trying to be something that it’s not.

The only irritation was the sill around the outside of the car. It’s too low to step onto when entering the car, yet it protrudes so much that you brush your leg on it if you don’t. Given it rained all week when I had it, this meant wet trousers. First world problems in extremis.

That was the only thing that irked me. A sill. Everything else is superbly thought out and put together. It feels every inch a premium product, from the material used right down to the perfume in the glovebox that’s used to scent the cabin. So, it even smells good in here. A platform well suited to electrification, the Mercedes EQC hits the right notes.