A great GT car should stir the soul, a perfect companion for any journey and any occasion. Meet the Lexus LC500 Convertible 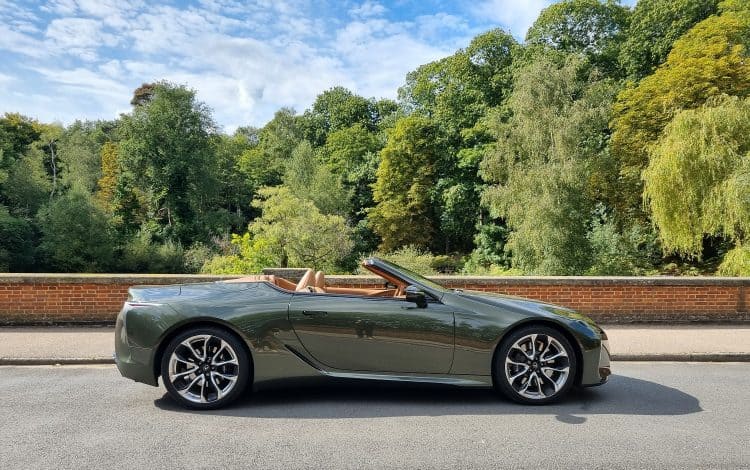 Electric vehicles are here to stay. There’s no getting away from that fact, no matter how much you may wish it were not the case. We’ve reviewed a run of them recently and some of them been outright fantastic. The future isn’t as bleak as some would have you believe. But yet… they undeniably lack a certain je ne sais quoi. What better way to break from the monotony of instant torque hits inducing silent but violent acceleration than with a V8? More to the point, Lexus’s naturally aspirated 5.0ltr V8, as fitted to the rather majestic looking Lexus LC500 Convertible. Whilst it will get beaten off the line by a well-heeled Kia EV, it makes you appreciate that there’s so much more to driving besides.

We’ll miss engines and cars like this when they’re gone. Whilst they don’t make up a major chunk of car sales (when was the last time you saw a Lexus LC500?), these ultra-rare birds of paradise are automotive wonders. They look superb, first and foremost. Sleek lines and an aggressive gait, several a head turn was induced by the model tested. If the visuals didn’t capture much attention, then the audio certainly did. Whilst the V8 fitted to the Lexus LC500 Convertible isn’t the most aggressive V8 unit you’ll find, it emits a rumble full of purpose and intent.

It’s omnipresent in the driving experience, always there to guide you along and provide a firm shove when one is required. There’s so much to commend the Lexus LC500 Convertible, yet the engine takes centre stage. We reviewed the Lexus LC500 last year and the opportunity to review the convertible was an opportunity to experience that engine once again. I’m out of reasons to get my hands on one next year now, though.

As you can probably tell, I’m rather taken with the powertrain. It produces 458bhp and 540Nm of torque, enough to send the Lexus LC500 Convertible from standstill to 60mph in five seconds. Whilst that sounds pedestrian by today’s outrageous standards, the build up of the power and the engine note as it rises through the revs is what will plant a smile across your face.

It also helps to deliver a remarkably smooth driving experience. Progress is swift and serene, with the V8 a guiding hand in your back. From mid-range speeds, pick-up is more than enough. The only barrier, at times, is the 10-speed gearbox. Once settled into a cruise the Lexus LC500 Convertible just does its thing, but when you ask for a sudden burst of acceleration, it can confuse itself on downshifts, not always picking out the best gear. Bring the paddles into play for overtakes and it makes life easier, the gearbox instantly drops down several cogs to offer up more power.

It also makes the engine growl with real intent. Drop it down the gears and let the engine arrive at 5,000rpm and upwards, and you can really enjoy the ascent to the crescendo of the redline.

This audible sensation is made all the sweeter by having the ability to remove the roof. Whilst the convertible is heavier than the coupe at a smidge over two-tons, the Lexus LC500 is very much built with long distance cruises in mind. This isn’t a car you’re going to seek out track days in. The available power is very much a reassuring background presence rather than an in-your-face aspect of the car.

Okay, so I did give it a run down a few of my favourite local B-roads. The Lexus LC500 Convertible picks up pace smoothly and audibly. For more spirited runs, using the paddles to change gear is definitely the way to go.

The steering, inline with the rest of the setup, is relaxed and refined rather than supercar sharp, very much in keeping with the rest of the car. It’s perfectly accurate, though, and placing the car along twisting roads is confidence inspiring enough. The drive modes, selectable from a rotary dial on the left of the dashboard, run through eco and comfort to sport and sport+. There’s no discernible change to the steering, although the Lexus LC500 Convertible does hold a lower gear and respond more keenly to throttle inputs. It’s easy to forget to change it back to comfort or eco, though, such is the similarity in characteristics. The major upside of this is that you still get plenty of theatre from the V8 even in eco mode.

In corners and under heavy breaking, there’s no hiding the kerb weight. Being RWD, applying too much power out of corners does swivel the backend round, but never to an alarming degree. Everything is calm and composed, which is the aim of the game here.

Take the roof off, bring the stunningly good Mark Levinson audio system into play and just enjoy the environment – this is a car to be experienced and that’s the Lexus LC500 Convertible’s USP. You could drive it for hour after hour and still want to keep on driving. It never gets boring and always leaves you wanting more.

Living with the Lexus LC500 Convertible

Practicality isn’t the strong suit here. Making space for the retractable roof, which takes around 20-seconds to lower or raise at speeds of up to 31mph, leaves the Lexus LC500 Convertible with a paltry 149-litres of boot space. That’s not much more than you get in a McLaren 720S. Fear not, however, for the rear seats in the 2+2 layout aren’t really suitable for human beings, so stick you excess weekend luggage in the back and crack on.

There is ISOFIX in the rear seats though, which increases the Lexus LC500 Convertible’s usability if you need to pop out with a child. My son moaned about having the roof down, however, as he deemed it too noisy.

I’m unsure what he was moaning about, as even with the roof down, the cabin in the Lexus LC500 Convertible is remarkably still. Turn the neck heaters on, deploy Lexus’s Climate Concierge and you’ll be warm and snug, enjoying the open air on any dry day of the year.

The quality of the cabin is exceptional, too. Everything feels expensive, nice to the touch and well thought out. It makes you feel good about the car from the first time you get in it. I’ll mention the Mark Levinson audio system again because, if you’re getting a Lexus LC500 Convertible, get one with it fitted. It’s remarkably good, offering exceptional sound quality even with the roof off at 70mph.

The seats are supremely comfortable, heated and ventilated, and you can find a comfortable position with ease. A superb head-up display keeps you informed of all the important bits, and you can really settle into a cruise.

So, what’s the drawback?

As with the Lexus LC500 Coupe, it’s the tracer pad for operating the infotainment. Having used it before, I didn’t find it as utterly infuriating second time around, but it is still annoying. A quick press of the accelerator is all that’s required to forgive and forget, however. You can get used to a mousepad in return for getting used to that noise.

Another minor irritation is the headlights. They do a superb job of illuminating the road, but the auto full beam function can be a bit dim-witted at times, to the annoyance of oncoming traffic. Even without the full beams deployed, the Lexus LC500 Convertible can irritate others. The sight line of the headlights is just a bit too high, so expect to get flashed by those who think you’re cruising around with your full beams on. Having looked this up on a couple of owners’ forums, it’s a common cause for complaint and you can only lower these manually, too. There’s not option to do it as you drive along, so you’ll need your screwdrivers and a manual.

The vast majority of cars are supremely competent these days. Yet they can also blend into an amorphous lump of an experience. Writing about them can be challenging. It has, er, seats, and, er goes forward and round corners… The Lexus LC500 Convertible wilfully breaks the mould in almost every respect.

A £108,000 gas guzzling V8? It’s hardly one for the future. It’ll also get left behind at traffic lights by hot hatches. Such luxury GTs are soon to be redundant, in this classical format at least, but this is a hell of a way to bid them their inevitable farewell.

A good GT should stir the soul, being about the experience of reaching a destination. The 82ltr fuel tank will keep you stocked for a journey from London to Edinburgh and you won’t ever want to stop. Such a journey would even afford you time to work out how to use the tracer pad thing.

The Lexus LC500 Convertible is an impossible car to dislike. It flows like fine wine along the road, it looks majestic, it sounds magnificent and it’s a treat to experience. Lexus has set this car on its own path and it’s all the better for that. Not being obsessed by 0-60 times and how fast they can get round that circuit in Germany has enabled them to produce something memorable and unique. GTs aren’t supercars or sportscars, they’re for savouring journeys rather than savaging them. The Lexus LC500 Convertible encourages just that.