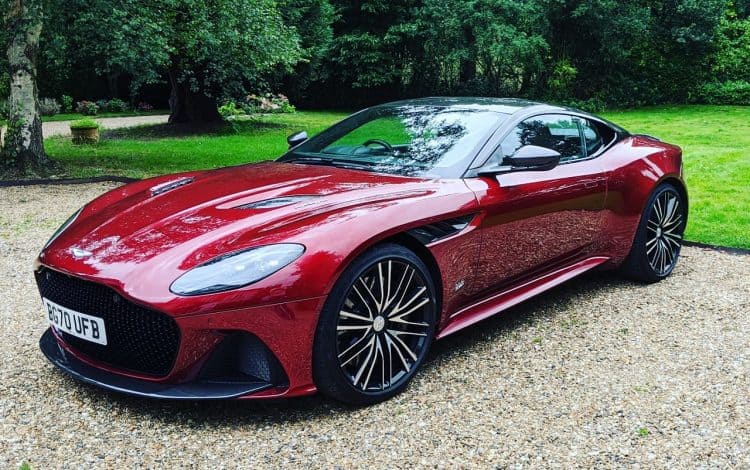 The role of the grand tourer has always been to bring together style, luxury, sophistication, aesthetics and performance into one package. The ultimate expression of driving? They just may well be. There’s undoubtedly a romanticism that lingers on the genre; not as uncouth as a supercar nor as slovenly as a limousine. Yet, somehow, straddling both borders. That’s why cars such as the Aston Martin DBS superleggera attract such admiring glances.

The first thing you’ll notice is the striking looks. The Aston Martin DBS superleggera looks sensational. It’s a masterpiece of motoring aesthetics and I didn’t know whether to stare at it or drive it to begin with. It delivers as much joy sitting on the drive as it does when opening up the tubthumping 5.2-litre twin-turbo V12 out on the open road.

What’s the Aston Martin DBS superleggera like to drive?

You can judge the looks for yourself, but there’s only one question on that front: is there a better looking car in production right now? The answer is no. So, with that settled, it’s onto the driving dynamics.

The numbers are intimidating. The Aston Martin DBS superleggera is fitted with that 5.2-litre twin-turbo V12 engine from AMG. 715bhp all delivered through the rear wheels. 900Nm of torque. 0-60mph in 3.4secs. 0-100mph in 6.5secs. That translates to the driving experience, too.

It’s arguably a little too powerful. Application of full throttle results in the DBS squirming beneath you, the traction control light flickering manically. You’d need a death wish or lots of open space to switch that off.

With a lighter touch, it still isn’t what you’d describe as slow. A gentle nudge of the right foot and it gathers speed at a still alarming rate. With so much torque to call upon, the acceleration is savage and unrelenting – when you want it to be.

The Aston Martin DBS superleggera is as smooth as silk and as violent as a Mike Tyson uppercut – and everything in between. It’s all things to all drivers. Running it through the gears in manual is a supreme experience. Peak torque is delivered between 1800 and 5000rpm, so upshifts deliver a swift blow to the back and the acceleration keeps on coming. In fourth gear, 50-100mph is dispensed with in 4.2secs. On a continent crossing adventure, the DBS will show almost anything a clean pair of heels.

Out on a flowing B-road there’s plenty of traction to work with and the steering is precise. In Sport and Sport+ you can run it through the gears and enjoy the symphony of the quad exhausts burbling, popping and banging behind you. It enlivens every sense at once when you start to push it.

Away from the savagery the Aston Martin DBS is perfectly amenable. At 70mph on a motorway cruise the engine works away at around 1500rpm, the double glazing keeps things quiet and you can enjoy the Bang & Olufsen BeoSound upgrade that was fitted to this model. You can also enjoy the admiring glances of fellow road users. The DBS draws plenty of attention. If you don’t like being looked at or talking to strangers at petrol stations, this isn’t the car for you.

Through towns, the Aston Martin DBS is smooth. Speed bumps and potholes are handled surprisingly well and the three ride settings (GT, Sport and Sport+) offer plenty of options to cater for how you to wish to drive. I left the ride in GT mode most of the time, Sport and Sport+ were a little too firm for our bedraggled roads here in the UK, but hit a decent autobahn or track and firming up the ride is a good option to have.

You can also operate the powertrain and ride individually. So, you can have the most aggressive power delivery, Sport+, combined with the GT ride setting. You can be both a hooligan and comfortable at the same time.

The engine will also start up in different ways. A quick press of the starter button and it clears its throat aggressively. A longer press and it’s a bit softer. You won’t ever escape in silence, but your neighbours might appreciate the thought at least.

Living with an Aston Martin superleggera

The Aston Martin DBS superleggera is unlikely to feature as anyone’s daily driver, but it could do the job. It has Isofix in the rear seats and handles commuting well. I drove it up to Richmond in south west London in rush hour (admittedly during school holidays) and it was very comfortable. I was worried that it would feel constrained by traffic, angrily demanding to be freed from the leash, but it was relaxed. Heated and airconditioned seats help, as does that upgraded audio system.

The boot is a little small and the rear seats, really, are for auxiliary storage. I did get my son in the back but had to have the front passenger seat all the way forwards to accommodate him. There’s also a bit of a shortage of storage space, with a small entre console and shallow door bins.

I do like the interior a lot. Obsidian black and Lord’s red compliment the diavolo red paintwork. The seats are comfortable, the squared steering wheel is a nice size and all the important controls – what sort of power delivery and suspension setting do you want? – are found there. The rest of the controls – stop/start, forward, reverse and park – are found on the centre console but are within easy reach. The abundance of physical buttons for the HVAC are also useful. You could live with this car on a daily basis quite happily.

I had, perhaps obviously, been rather excited about having a few days with this car. It didn’t disappoint. And that, perhaps, is the biggest negative of the Aston Martin DBS superleggera. Everything thereafter is going to seem mundane. Will anything ever be the same again?

Almost everything about this car is addictive. It’s looks, it’s performance, it’s sound. There’s something here for everyone. It’s not perfect, but then nothing is. The infotainment is weak. It could do with a wee bit more storage space. You’ll be stopping frequently for high octane fuel (17.4mpg over 400 miles as tested). Show it any disrespect and it will try to kill you.

Aston Martin refer to the DBS superleggera in their marketing bumph as a ‘brute in a suit’. That seems apt. It’s suave and sophisticated when you need it to be, but it can also be like James Bond gobbing off at a Russian spy over a poker table in Monte Carlo after a few too many Martinis. At once it’s refined, relaxed, raucous and rowdy. The DBS summons both Tchaikovsky and Tyson in one stunning package.

You’ve probably gathered by now that I rather fell in love with the Aston Martin DBS superleggera. The super GT is a curious beast and a genre that produces intoxicating cars. If you’re looking for supercar speed, limousine comfort and stunning aesthetics, these cars are all things to all drivers. The Aston Martin DBS superleggera is, quite possibly, the best of the lot.