The Porsche Cayman GT4 is a driver focused mean machine, designed to deliver thrills and spills to all comers. Does it justify the hype? 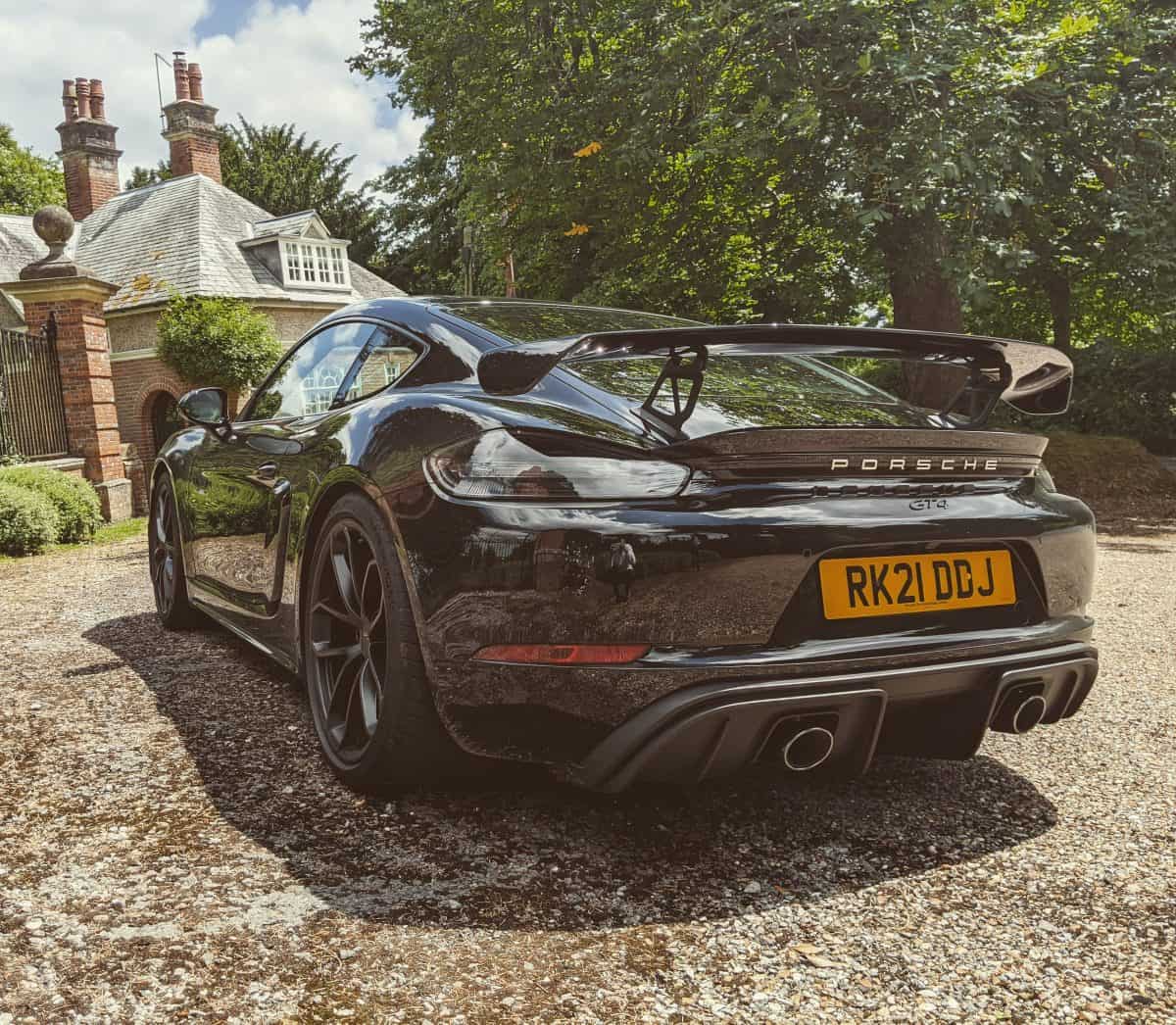 The English summer is an unpredictable beast. Sure, it’s a bit warmer once March cedes to April, but sunshine can remain an elusive concept. When lining up cars to review, there are some that you arrange then sit back and say a quick prayer that it will be one of those days when the weather plays ball. You just can’t get the best out of some cars in the rain. At least not on a public highway.

It was with some relief, therefore, that the weather around Berkshire and Wiltshire bestowed sunshine upon us the day I had the Porsche Cayman GT4. A rear wheel drive, 414bhp, 4.0-litre flat six that sends you from 0-60mph in 4.4secs is certainly a car that you want a nice day for. So competent is it, however, that I’m sure it’s absolutely fine in the rain as well. It’s just, you know, everybody loves the sunshine. Roy Ayres was right.

Porsche designed the Cayman GT4 to fill a gap vacated by its own 911. The 911 used to offer an attainable target to get into a well heeled sports car, but it has become a supercar in its own right, in most of its guises, in recent years. The price tag has risen as a result.

So, Porsche had left a gap in its own market. The Cayman has proven to be a popular model in the Porsche range since its first launch in 2006, so a step up to fill the elite sportscar driving brief made sense. Equipping the Porsche Cayman GT4 with the tub thumping naturally aspirated 4.0-litre engine offers the atmospheric conditions you’d want to accompany the performance, too.

The aggressive rear wing, front splitter and 718 Cayman GT4 exclusive wheels immediately signpost this car’s intentions. The model tested was completely blacked out, from the interior to the paintwork, to the wheels and even the brake callipers. It certainly impresses on first viewing.

You’d be forgiven for thinking that it’s an outright hooligan. It is to an extent, but there’s an inherent usability to the Porsche Cayman GT4 as well. There’s no escaping the engine noise when you’re out on the road, with it sitting just behind you as you chug along. Press the button to open the exhaust valves, pin the throttle and it emits a wonderful burble. Drop it down a couple of gears and do the same; it positively roars.

Chasing the redline, which arrives at some 8,000rpm, is a hazardous activity out on the road. As you’ve probably read elsewhere, second gear is rather long and it will, apparently, do 85mph in second gear. That’s not to say it puts you off cycling through the gears, which is a pleasant experience with the manual gearbox. Second, third and fourth gears offer their own character in terms of progression. Second, obviously, being the most aggressive, with third and fourth offering increasingly smooth delivery of those 414 horses. None of them is dull.

Driving the Porsche Cayman GT4 on the road

I only had the Porsche Cayman GT4 for a day. Collecting it from Porsche’s Reading HQ, you don’t have to drive too far to find appropriate roads for a car like the Cayman GT4. The M4, with its incessant average speed cameras owing to the installation of a ‘smart’ motorway, offered a relaxed setting in which to familiarise myself with the buttons and functionality. Plodding along at 60mph, the Porsche Cayman GT4 was surprisingly relaxed. I was expecting it to be a bit like a dog straining on the leash, desperate to run free, but it was perfectly amenable.

The M4, however, was not what was this car was designed to tackle. Peeling off towards Lambourn, the B4000 immediately felt like a more natural environment for Porsche Cayman GT4. From there, the B4001 towards Wantage really offered a chance to see what the GT4 can do, being a mix of perfectly scenic and having an imperfect road surface. Even on the scarred surface, the Porsche Cayman GT4 was never anything less than totally composed.

From Wantage across to Ashbury, the twisting, undulating roads were the perfect opportunity to put the handling to the test. The first thing that leaps out is the steering. The steering wheel reacts in your hands to every bump in the road, offering a real sense of connection with it. Prod the throttle on the exit of tighter corners and the back end slips out to straighten the car.

It never feels out of control or unmanageable, just perfectly precise. When the road straightens, there’s plenty of power to call upon and approaching the next bend, the brakes are easy to modulate as well. With the seemingly unending series of twists and turns provided by the B4507, the Porsche Cayman GT4 makes you feel like a good driver. The model tested also came with the manual gearbox. It’s nice and precise, with great feel through the gears. The auto-blip feature, which rev matches on downshifts for a smoother change, works superbly. If you’re a fan of heel and toeing, this can be disabled at the switch of a button, but it certainly did a better job than I could have done!

Living with a Porsche Cayman GT4

There’s storage space in the rear and a front boot, too. You’d get your weekend bags in and probably a cricket bag. Practicality isn’t the name of the game, but if you have a Porsche Cayman GT4, you’ll make it work simply because you’ll want to drive this thing at every available opportunity.

There are storage compartments beside the windows and a couple of nooks and crannies within the cabin to accommodate your phone and wallet.

Where the Porsche Cayman GT4 impresses in this section is the range of its use cases. A car so focussed on the driving experience could reasonably be expected to be a one trick pony, but with distinct suspension settings you can relax the ride and smooth the imperfections of the UK’s roads. In ‘sport’ setting the ride is too firm for use on most roads, becoming jarring, but for those track days you’ll certainly be doing, it’s perfect.

The cabin is comfortable, too, decked out in alcantara. The infotainment is straightforward to use and there’s a stereo that I didn’t turn on because I only had the Porsche Cayman GT4 for a day and I got lost in the music of the engine.

Whether you’ve driven sports cars for many years, or this is your first rodeo, you’ll be able to get a level of enjoyment from the Porsche Cayman GT4 that will put a smile on your face every time you drive it. There’s something here for everyone at all levels. It’s easy to see why this car is unanimously loved.

Porsche have put a lot of effort into the steering and the overall feel of the Cayman GT4 and you’re immediately aware of that. The simple act of placing it through a bend is a delight and then when you push it further towards the limits of its grip, it seems to win its battle with physics and deliver traction levels beyond anything you might expect. The fact Porsche hasn’t made it intimidatingly fast helps, too. That’s not to say it’s slow, because it really isn’t, but the power that is available is usable in a real-world setting and you can just enjoy it.

It’s a car that demands to be driven and that reacts to your every input. It certainly fills the gap vacated by the Porsche 911 and you’ll make any excuse to drive it. A superb, well balanced sports car, the Porsche Cayman GT4 is Porsche at its very best.