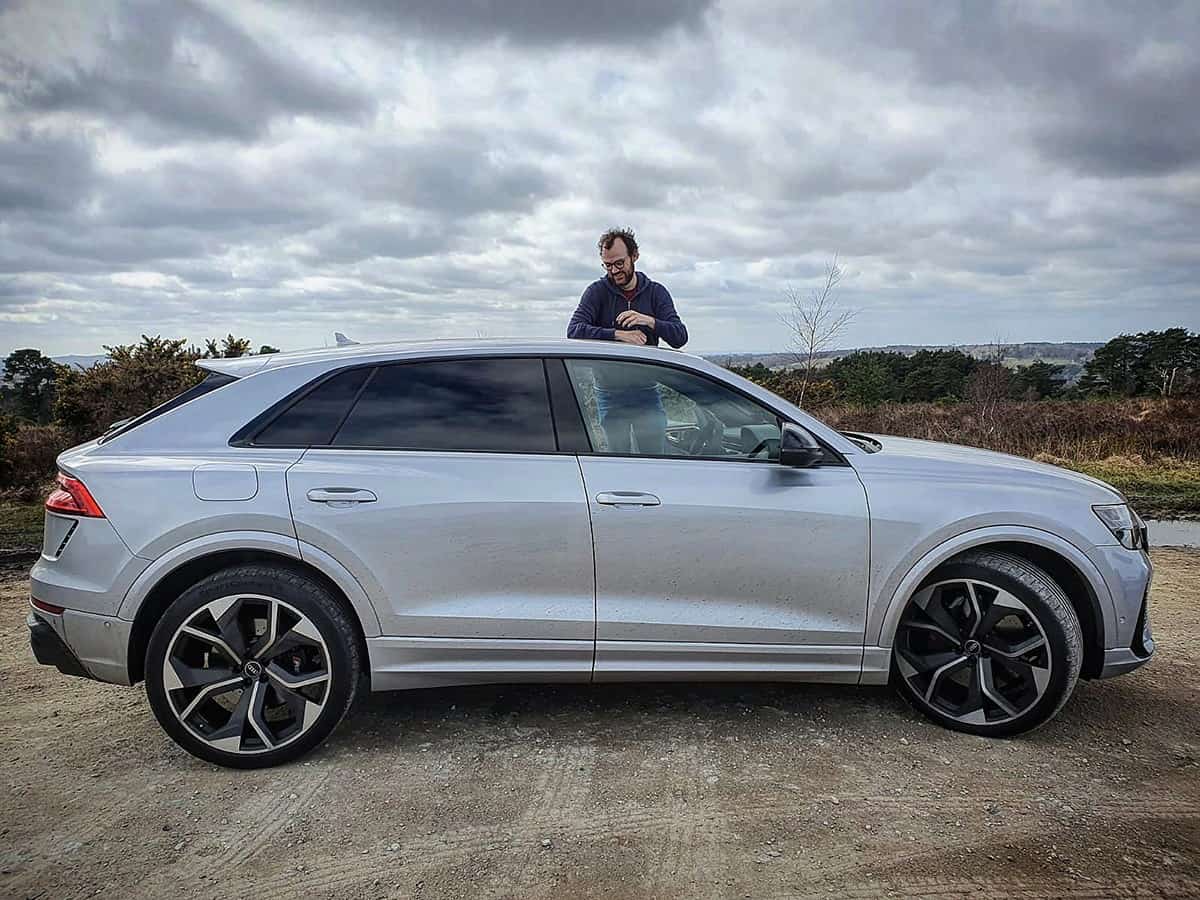 You’ve probably heard the myth around bumblebees, that their flight defies the laws of physics. Their wings are too small to get their bulbous bodies airborne, yet there they are every summer, buzzing busily around gathering that sweet, sweet nectar for their hive and other associated bumble bee activities. The trick to their flight is the speed at which they can beat their wings; around 200 times per second.

It’s not often that you see something that should be nigh on physically impossible being achieved, like the bumble bee, but it’s always impressive when you do. I was further reminded of this recently as it was the 14th anniversary of the stunning catch that Dwayne Leverock took in the 2007 Cricket World Cup. It was for the minnows of Bermuda against the mighty India, at the World Cup, getting them off to a great start. If you haven’t seen it before, you can do so here. You’ll know what I mean.

So, what do bumble bees and Dwayne Leverock have to do with the Audi RS Q8? Well, the Audi joins them in the company of having pulled off something that probably shouldn’t be possible. It’s every inch as impressive as those little wings beating at 200 flaps per second, or as a fat bloke claiming a stunning one-hander at first slip in an elite sporting event.

The RS Q8 weighs in at 2.6-tonnes before you’ve added any passengers and luggage to the mix. Such weight would normally restrict what’s possible for a car, but the RS engineers at Ingolstadt were obviously up for a challenge and what they’ve constructed is a physics-defying concept that delivers its on-paper performance in the real world.

Audi’s twin-turbo charged 4.0-litre V8 produces 592bhp and propels this cathedral on wheels from standstill to 60mph in just 3.8secs. This is a family car that you can race supercars in.

You just don’t believe that it will do what Audi claims, but it does. I tried. And tried again. Just taking a walk around this car you notice that everything is dialled up to 11. It’s huge. The Vorsprung model tested is the range topper and comes fitted with 23-inch wheels. The brakes fitted to the front wheels are 17-inches. The doors are pillarless, the height is imposing, it’s at the very limit of how wide you could accept a car being and it’s long. In a nutshell, the RS Q8 has road presence in spades.

The RS Q8 was brilliantly composed in all settings. Doing local runs to drop my son at nursery; easy (it will self park, so the tightest spaces are no issue). The B-roads between Woking, Guildford and the Surrey Hills, Ashdown Forest and its sweeping lanes; tackled like a sportscar. On the motorway to Reading and back; serene progress. It’s only really on tight country lanes that you begin to feel the sheer size of this thing.

There is a plethora of technological and engineering wizardry afoot in the RS Q8. You can really throw it into tight corners and it just stays bolt upright, barely shrugging as the active anti-roll bar keeps it level and the torque vectoring delivers the power where the power is most needed to propel you out the other side.

It’s like driving a hot hatch, which is difficult to get your head around at first. I found myself untrusting that the car would actually get through corners at the speeds it can, but after a short while you do come to trust the engineering at play. That’s really the limit – how brave are you feeling?

I never felt anywhere near the edge of what this car can do, for I rarely feel brave. For that, public highways are insufficient; you would have to book a track day. And the car can feel somewhat overengineered at times – it feels calm and muted no matter what you’re doing, gently smiling at you whilst it performs its mesmerising tricks. I can imagine the team responsible for delivering the RS Q8 had a great time, deciding that 23-inch wheels and 17-inch brakes are the order of the day, and that an active anti-roll bar and torque vectoring will be necessary on a family SUV.

If you want a car that can do what the RS Q8 does, then you have to accept the compromise of engagement. Without all the tools it comes equipped with, it would be a terrifying, dangerous brute of a car. It still can be, but all the wizardry enables it to massively outperform its stature, even in the hands of a regular driver.

Behind the numbers, it also delivers as a family car. The interior is unmistakeably Audi, with the virtual cockpit and touchscreens being straightforward to use and soft leather seats, with additional massage function in the Vorsprung edition, keeping you comfortable on longer journeys. There is Isofix, air conditioning, heated and air-conditioned seats, air ioniser, perfume, heated rear seats, you can lower the boot to make access easier – and there is room. Lots and lots of room.

The ride quality is perfectly amenable, too. It is slightly on the stiff side for an SUV, but again, that’s one of the compromises you have to make for a car like this. You can also adjust the settings depending upon your mood, from efficiency and comfort to dynamic, sport and RS modes.

In its most aggressive guise, the RS Q8 hunkers down lower to the road, ready for whatever you dare to throw at it. In comfort, the ride is raised and it fairly glides along. As you’d expect, potholes and speed bumps don’t cause too much consternation.

The adaptive cruise control system is also really well thought out. It’s easy to use and changes the speed of the car to match changing speed limit zones. Driving up the A3 towards Guildford, the speed limit changes from 70mph to 50mph. The RS Q8 slows you down so that you’re doing exactly 50mph the very moment you enter the new speed zone. It then picks up again on the other side.

Another mild point of irritation is that it doesn’t recognise when you’re using the Isofix to secure a child seat, so it assumes that someone is sitting in the back without a seatbelt on. So it bongs. It bongs loudly and it bongs frequently. If you’re carrying anything in the back, remember to plug the seatbelt in.

Fuel consumption, if you hadn’t already guessed, is pretty wild in a 2.6-tonne car that will chase supercars. I got around 17mpg for the first few days, but after an extended motorway journey this got up to 19mpg. You will be familiar with the attendant at your local petrol station.

They say you shouldn’t judge a book by its cover, but most will with a car like the Audi RS Q8. You’ll know from looking at one picture whether this is a car for you. And if the RS Q8 is a bit of you, it will not disappoint.

It delivers comprehensively on every front. It’s big, spacious and comfortable. It looks aggressive and imposing. It goes like a thoroughbred. It has undeniable presence.

SUVs aren’t usually for the purists, since they lack engagement and feedback. Whilst that is true of the RS Q8 to a certain extent, what it delivers is astonishing. A car this size simply shouldn’t be this fast or this agile. The ride is perfectly refined, too, and there are all the creature comforts you could wish for.

The only drawback is that you’re aware that the car is doing a lot of the heavy lifting for you. Put simply, the car is better at being a car than you are at being a driver. Stick it in RS mode and set the massage setting to revitalisation, however, and you won’t really care. You’ll be hurtling towards the horizon in perfect comfort. And that, really, is the RS Q8’s raison d’etre.